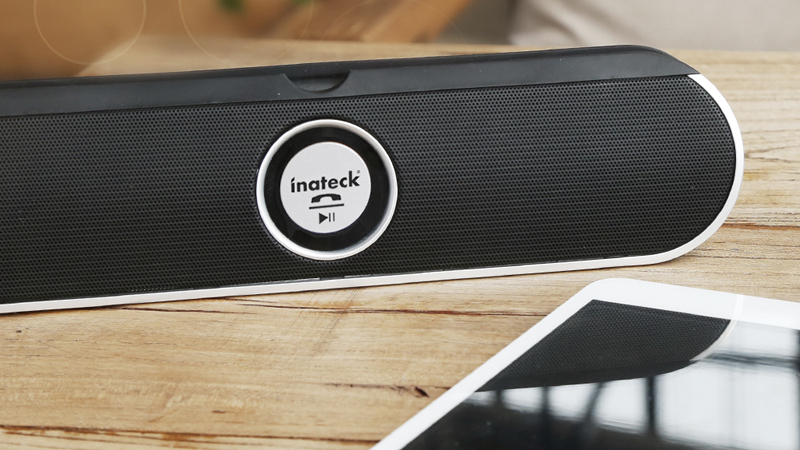 Inateck’s BP2001 is a well-priced portable Bluetooth speaker designed to work with your tablet, but it’s compatible with any smartphone, laptop, PC or other device with a Bluetooth connection or 3.5mm headphone jack. Also see: 13 best portable speakers.

It’s more expensive than its little brother, the £15.99 Inateck BP1001B, but the BP2001 offers a vast improvement for an extra £13. Not only is this slightly less portable but just as sturdy Bluetooth speaker much better looking – an elongated dock that combines stylish matt, meshed and admittedly fingerprint-prone glossy black ABS plastic with a chrome effect trim – but it sounds better, too.

In our tests we found no distortion, even at our tablet’s maximum volume, and the audio from the BP2001’s twin 5W speakers is much clearer – and louder – than that of the BP1001B. We’re talking proper room-filling sound, which is a bargain at just £28.99 (sold via Amazon). True audiophiles with fat wallets may want to look elsewhere, but for most of us the Inateck will do a great job of blasting out our music.

A dock at the top of the speaker lets you perch your tablet on top. The Inateck won’t charge your device, but two vibration-reducing rubber feet and a built-in kickstand keep it secure and ensure it remains within the BP2001’s operating distance (around 10m over Bluetooth 2.1+EDR). With the Inateck some 240mm long we found our Nexus 10 just slightly overhung the speaker, but not awkwardly so. The dock’s open-ended design lets it fit any size tablet, although we had to remove our Samsung Galaxy S4‘s chunky Mophie battery case to fit it in the groove (not at all unusual, to be fair).

Despite previous problems using Bluetooth with this tablet, the Inateck found and paired with our Nexus 10 within seconds, and held on tight to that connection. If your phone, tablet, PC or laptop doesn’t support Bluetooth you can also hook up the two using the Inateck’s AUX port and your device’s 3.5mm headphone jack. The necessary cable is supplied, but at 60cm long it may affect where you position the speaker when used with a PC or laptop.

In common with its little brother the BP2001 supports Bluetooth calls, which is important if you’ll be pairing this speaker with a smartphone rather than a tablet. Handsfree telephony makes it easier to conduct group conversations – you just press the large silver button at the Inateck’s centre to accept a phone call.

This button also pause/plays audio, while LED symbols immediately below denote whether the Inateck is in AUX, Bluetooth or charging mode. The latter isn’t especially necessary, but it does at least remind you when the speaker is switched on.

One difference between the two Inateck speakers is that this BP2001 doesn’t feature a volume dial. Actually, we don’t mind that – we’re far more likely to control volume using the device in our pocket than walk over to the speaker to turn up (or down, but more likely up) our tunes. It also means you’ll always know exactly where you are with the volume. Plus, you can download third-party apps to your mobile device that let you tweak playback.

With an 800mAh battery inside you can expect six or seven hours of playback, depending on your usage. Also see: Inateck 5 Port USB Charger review.