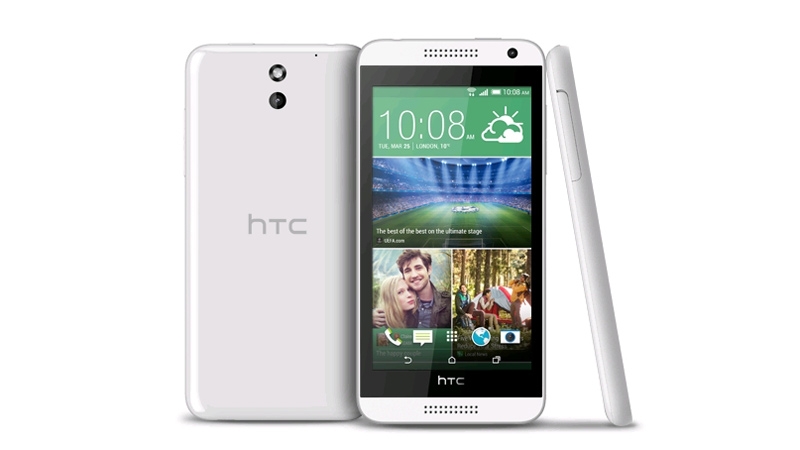 Overall, the HTC Desire 610 will appeal to anyone looking for a reasonably priced all-rounder to use for browsing the web, taking good photos, emailing, texting, making phone calls, playing casual games and running Android apps. The HTC Sense software is sleek and easy to use and you’ll be satisfied with the battery life. We really enjoyed our time with the HTC Desire 610 and don’t have any real qualms aside from the large bezels and slightly disappointing display. We like the phone, but when you come to compare it with close rivals, it becomes more difficult to give it a hearty recommendation. If you’re on a budget it’s definitely worth investigating the Motorola Moto G, which only really falls down against the HTC Desire 610 when it comes to design and camera. For anyone with a bit of extra cash to spare, the Nexus 5 offers a better display, a faster processor and more and will only set you back an extra £60. 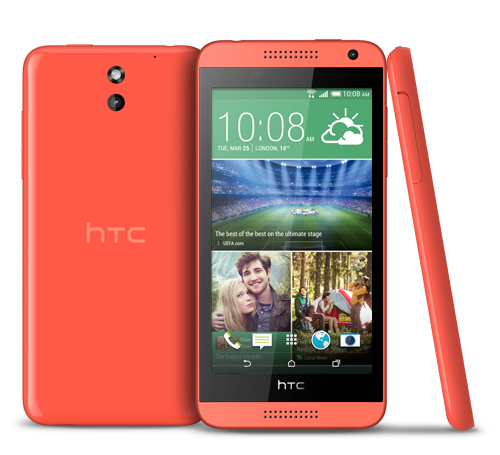 The HTC Desire 610 is HTC’s newest mid-range smartphone, a cheaper sibling to the flagship HTC One M8 and the successor to the HTC Desire 601. With a 4.7in display, nice design, front-facing speakers and a good camera it’s got a lot going for it, but it falls down when it comes to display and processing power. Here’s our full HTC Desire 610 review. See also: The 37 best smartphones of 2014

Priced at £239, the HTC Desire 610 is a rival to the likes of the £299 Google Nexus 5, the £229 Sony Xperia M2. That’s a reasonable price tag for what you get, but when you compare it to the £100 cheaper Motorola Moto G and realise that the low-cost smartphone trumps the HTC Desire 610 with some of its specs, and matches it in others, it’s certainly worth considering whether the Moto G is a better option if you’re on a budget.

The first thing we noticed about the design of the particular HTC Desire 610 we were testing was that it’s very, very bright. HTC says it’s “crafted to please your eyes” but we’re definitely not keen on the pinkish orange colour chosen by the company. The Navy Blue and White options are much nicer.

Three has announced that the pink/orange colour, which is apparently called ‘Coral,’ is exclusive to the carrier in the UK, so if you do have a liking for it you’ll need to go to Three to get that option. The Navy and White options are also available from Three and other UK carriers. 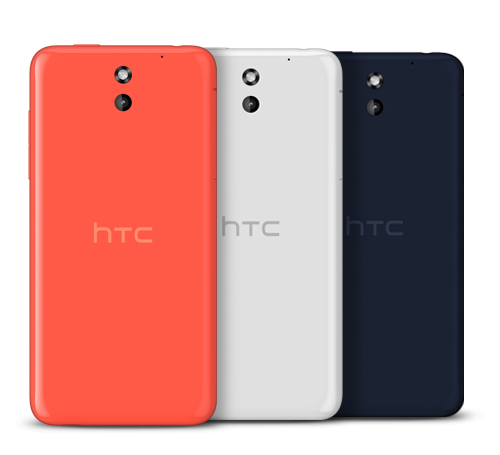 Aside from that, though, we rather like the design of the HTC Desire 610. While it’s made from plastic, it takes on a look similar to that of the iPhone 5c and manages to avoid looking tacky and cheap. It has a matt coating round the edges and on the front of the plastic casing which is quite nice, but we would have preferred if that had been used for the entire back case which is contrastingly glossy.

It’s a solid and very well built smartphone, with nicely finished buttons and a discreet flap covering the nano-SIM and microSD card slots.

The biggest downfall of the HTC Desire 610’s design is the bezels. The phone has a 4.7in display, but its overall size is much larger due to the thick bezels around the edges and at the top and bottom of the device.

The HTC Desire 610 is not quite as light as the Nexus 5, which is 130g, but at 144g it’s similar to the weight of the Sony Xperia M2 and the Motorola Moto G, and we found it perfectly light enough for prolonged periods of use. It’s by no means a heavy phone.

The HTC Desire 610 has a 4.7in display – smaller than the 5in display found on the HTC One M8 despite having a very similar overall size due to those large bezels we mentioned.

It’s a real shame that the display is only 540 x 960 pixels, though, making a pixel density of 234 ppi (pixels per inch). That’s higher than the Sony Xperia M2’s 229ppi, but much lower than the excellent 445ppi of the Nexus 5 and even the Motorola Moto G’s 326ppi, despite the higher price tag. 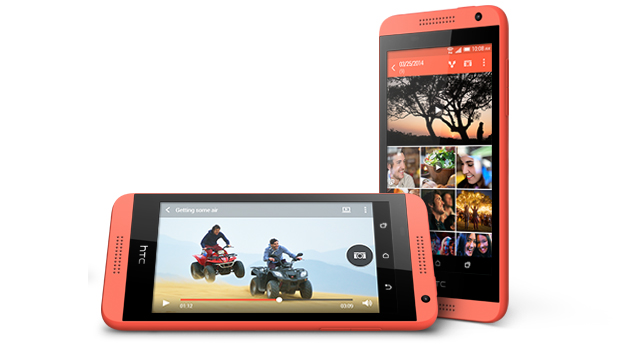 It’s particularly disappointing when you spot the front-facing speakers, which combined with a good display would have made the HTC Desire 610 an excellent device for watching movies and TV while on the commute and for playing games.

Nonetheless the display will satisfy anyone looking to use the smartphone for browsing the web, emailing, making phone calls and sending texts, and running useful apps and casual games.

When it comes to the processor, the HTC Desire 610 has a Qualcomm Snapdragon 400 1.2GHz quad-core processor, which is actually the same processor found in the budget Motorola G. It’s coupled with 1GB RAM, and we found performance to be responsive, but when you consider the price difference between the Desire 610 and the Moto G (you’ll save £100 if you buy the latter) it’s a shame the HTC’s offering doesn’t boast a faster processor.

As expected, it’s much less impressive than the Snapdragon 801 processor found in the HTC One M8, which has a clock speed of 2.3GHz coupled with 2GB of RAM.

During our benchmark tests, the HTC Desire 610 faired reasonably well. It averaged 1224ms in the SunSpider browser test, (though that’s much slower than the Nexus 5’s 801ms) and 1161 in the multi-core Geekbench 3 test. That’s lower than the 2761 scored by its HTC One M8 sibling in the Geekbench test and the 2800 scored by the Nexus 5, but it’s similar to the scores achieved by the Moto G and Sony Xperia Z2, though, which both sport the same Qualcomm processor.

In the GFXbench T-Rex graphics test, the HTC Desire 610 achieved 15s, which is similar to the Sony Xperia M2 and better than the Moto G.

Still, you’ll find launching apps on the HTC Desire 610 smooth and quick, and shouldn’t notice any lag while you’re navigating through the device or using it to run apps.

You’ll get 8GB of built-in storage with the HTC Desire 610, but we’re pleased to see that HTC has given the phone a microSD card slot that can be used to add an additional 128GB storage.

Connectivity includes 4G LTE and 3G compatibility, as well as NFC, Bluetooth 4.0 and 802.11ac WiFi. It’s not surprising to see a lack of additional features like an IR blaster which you’ll find on HTC’s pricier phones.

We enjoyed using the camera on the HTC Desire 610 and were pleased with the results we were able to achieve. The smartphone sports two cameras, one on the rear and one on the front.

The rear-facing camera is 8Mp with an aperture of f/2.4 and an LED flash, which is comparable to the camera found on the Nexus 5. It’s capable of capturing 1080p video, too.

The front-facing camera (ideal for selfies and video calls) is 1.3Mp and offers 720p video recording. 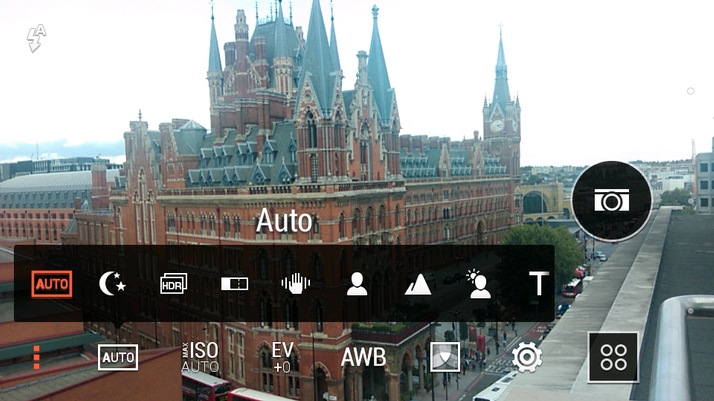 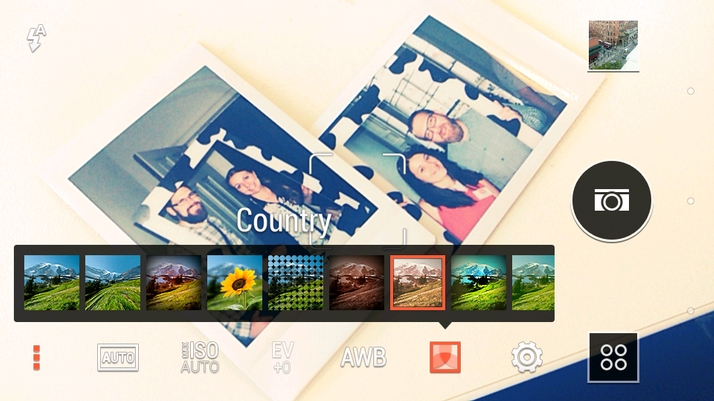 HDR mode is available while using HTC’s camera app, as is a wide range of filters and effects including vignette, depth of field, vintage and grayscale. You can see a selection of photos we captured using the HTC Desire 610 below. Click the images to enlarge. 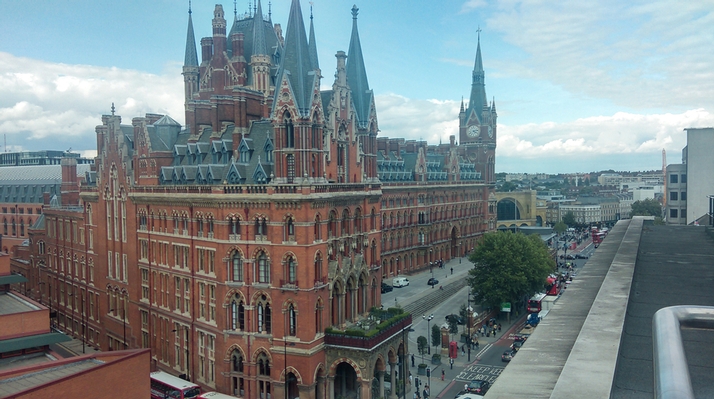 Above: A photograph of St Pancras taken using the rear camera on the HTC Desire 610, using the normal setting. Below is a full size crop of the photograph. Detail and sharpness isn’t great but unless you plan on zooming right in to your photograph or blowing it up to hang as a canvas on your wall you should be satisfied with the quality. 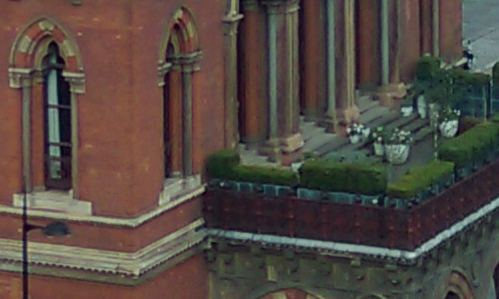 Below are further examples of the photographs we took using the HTC Desire 610. 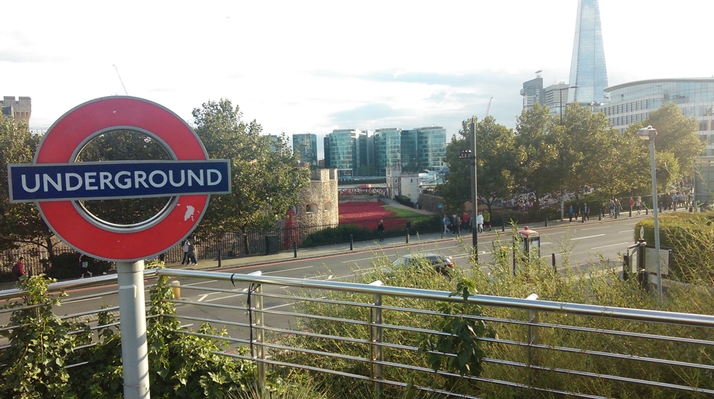 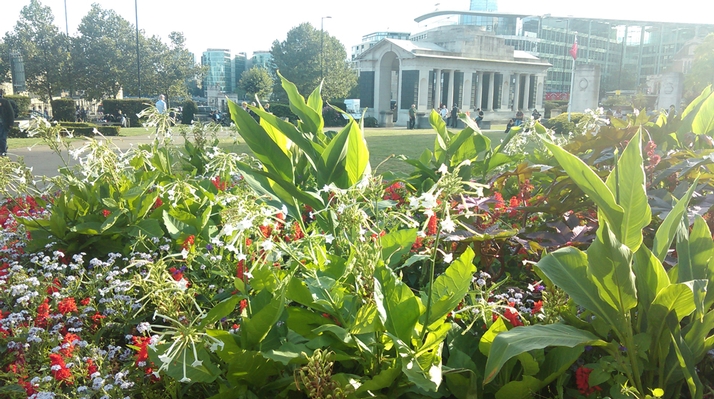 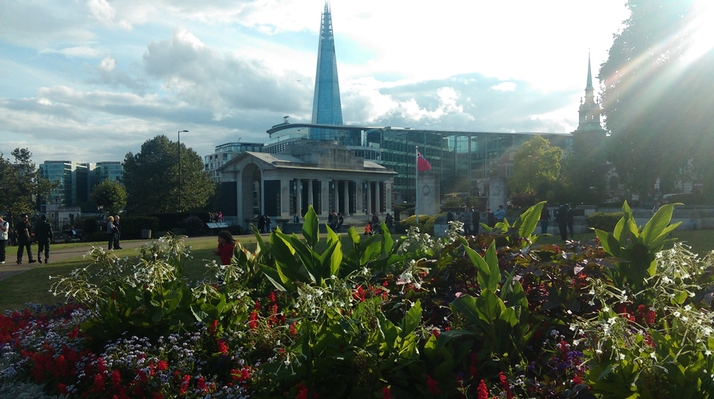 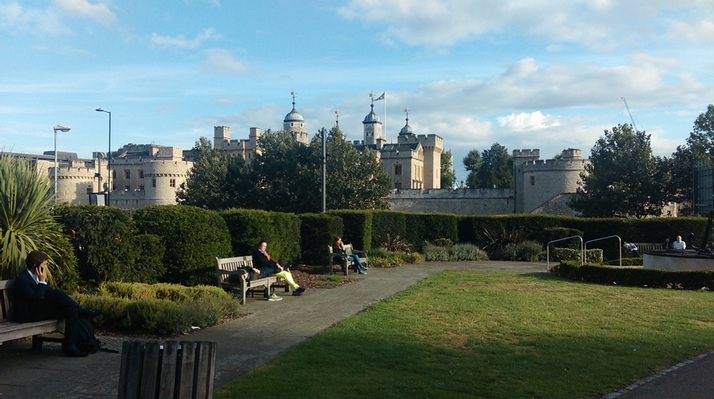 When you want to take a look back over photographs you’ve taken using the HTC Desire 610, you’ll find a gimmicky but fun video slideshow of your photographs playing at the top of the screen in the gallery app – part of the HTC Sense software which we talk more about below.

HTC’s Zoe app offers an expanded version of those video slideshows, enabling you to create customised ones to share with friends. At time of writing, we were unable to test out the Zoe feature as launching the app resulted in a ‘Coming Soon’ screen.

It’s quite different to the standard Android, with a clean design, a simple navigation system, easy-to-access settings and some extra HTC features.

These include HTC BlinkFeed, a news aggregator that you can use to get a quick look at what your friends are talking about and what’s happening around the world by enabling it to pull in Facebook statuses, Tweets, Google+ posts, news and more. 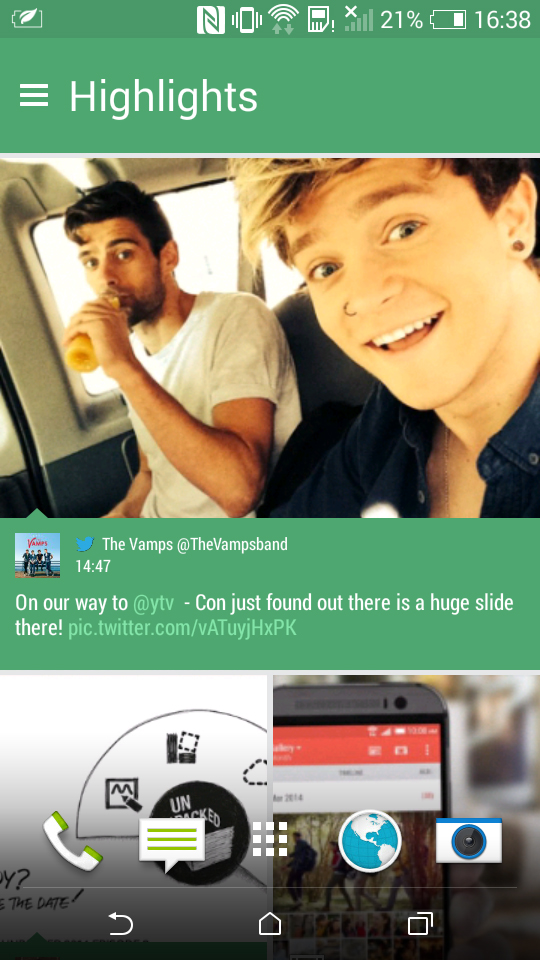 You can access BlinkFeed simply by swiping right from the home page but you can remove it completely if it’s not your cup of tea.

You’ll also get HTC Sync Manager, particularly helpful for anyone switching from an iPhone or other Android phone, and also a quick and easy way to get files including music and photos on and off of the Desire 610.

HTC Connect is also supported, meaning you’ll be able to easily connect to your home entertainment systems to play audio and video from the Desire 610. It’s a bit like Apple’s AirPlay system.

HTC says that the 2040mAh non-removable battery will last up to 15.8 hours talk time or up to 650 hours standby time. We found that it managed up to two days of general use without charging, though if you’re planning on spending a large portion of your time using the smartphone for watching video, browsing the web and more, it may need charging once a day.