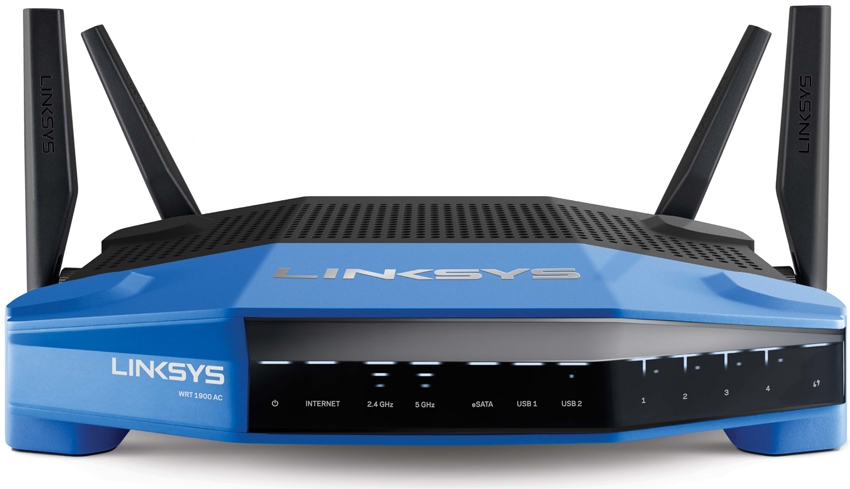 The Linksys WRT1900AC is undoubtedly a well-constructed unit with distinctive style and strong build quality. It’s wireless performance can only be described as disappointing though, given the statement made by its four-strong aerial array and a class-leading high price of £250. It’s possible that future refinement of the firmware could improve its prospects but as it stands it is markedly over-priced and under-performing. 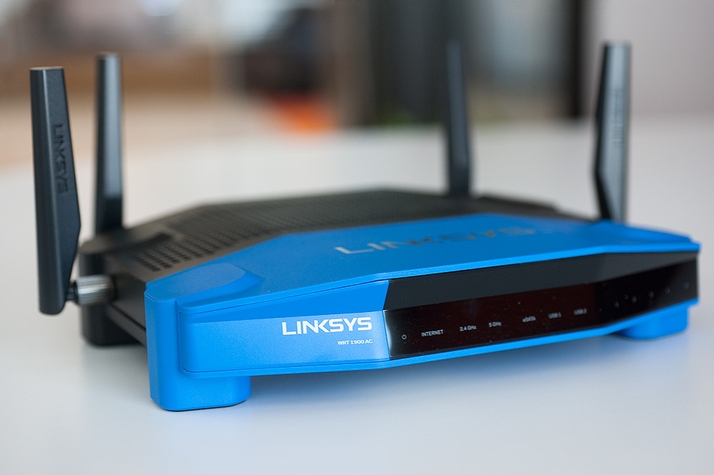 If you don’t mind the seriously geeky look, the Linksys WRT1900AC is one of the most impressively specified wireless routers available today. See also Best routers of 2014.

Based heavily on the industrial design of the classic Linksys WRT54G, the WRT1900AC is harking back to the glory days of the Linksys company just before it was bought by Cisco. The WRT1900AC has the same black-and-blue two-tone colour scheme, and the classic aspect that makes it seem to hover on four corner posts.

This new product is right up-to-date though with draft-11ac wireless, and is the only domestic router on sale at the moment in the UK with four separate external antennae, bristling from all around the chassis.

While the current 11ac draft specification allows for four MIMO streams – as indeed does 802.11n – the WRT1900AC is only using three spatial streams like every other router we see.

Three antennae are in use at any one time, selected automatically from the choice of four depending on location, we’re told. But without a fourth discrete radio chipset, the fourth antenna seems to be more of an aesthetic addition to allow better visual symmetry.

As the product name suggests, Linksys bills the WRT1900AC wireless router as ‘600 + 1300′, promising 600 Mb/s on the 2.4 GHz band, although uniquely here it uses not Broadcom but a Marvell processor and RF chipset. Since that sync speed requires two mythical conditions to be fullfilled (a client laptop able to process 256-QAM data at 2.4 GHz, and 40 MHz-wide channels on the same band) the Linksys is essentially a ‘217 + 1300′ device, in line any top-spec router that promises ‘AC1750′.

The Marvell Armada dual-core processor is clocked higher than any other though at 1.2 GHz, so if CPU clock speeds were any indication of actual performance this would be the fastest wireless router available.

Construction of the WRT1900AC is first-class, made from tough heavy-duty plastic and looking like it could survive plenty of weight on top – which it may indeed be asked to support, since the case is designed to be stackable should any related products be added to the range.

Four removable aerials are screwed in place with the usual RP-SMA type connectors – two on the back plate and one on each side of the chassis. At the back we also find the typical four gigabit LAN and one gigabit WAN port, plus two USB ports. One is USB 3.0 and the second is an unusual combination of USB 2.0 with eSATA port. Unusual, because we’ve never seen this on a router before; and not any computer for the last several years for that matter. The eSATA connector never proved popular and is today effectively obsoleted by USB 3.0.

Inside the WRT1900AC we can see attention has been paid to heavy use, with heatsinks and a cooling fan to keep processors and RF amplifiers from over-heating. Half of the top of the case is perforated with large holes, allowing you to see inside but also a potential inlet to house dust that will inevitably land on top. In use, we didn’t hear the fan operate.

Like the Linksys EA6900, the WRT1900AC takes Linksys’ Smart Wi-Fi interface, née Cisco Connect Cloud, with options of remote management via Linksys. The firmware gives the same broad facilities for media optimization, parental controls, guest access, along with the useful graphical visualisation of connected devices. As well as opening access to your home network for afar from a PC or laptop, there are also mobile apps available.

And like the EA6900 router and related products since the EA4500 [see <https://www.techadvisor.com/reviews/network-wifi/3375427/cisco-linksys-ea4500-review/] it is equipped with privacy intruding firmware, designed to allow Linksys/Belkin to monitor how you use your router.

The latest firmware at time of testing did not seem to be functionally complete either. Looking at wireless configuration for 5 GHz, the only options listed were for an 11n setup, listing only 20 and 40 MHz channels instead of 80 MHz available for current draft 11ac. And available modes of operation were either ‘Wireless A’ or ‘Wireless N’, with no mention of wireless 11ac. We were later informed by Linksys that the WRT1900AC was capable of 11ac operation if Wireless Mode is set to ‘Mixed’ and Channel Width to ‘Auto’. A 512-page PDF manual has only 15 pages in English and no explanation about the router’s advanced setup. See all Wi-Fi and networking reviews.

While the Linkys WRT1900AC looks the part for an industrial-strength wireless router, our wireless speed measurements were not so impressive. On the 2.4 GHz band and at short range, we saw an average throughput of 158 Mb/s, where most other routers plateaued at 170 Mb/s or more. Moving to the 10 m test the Linksys turned in the slowest result of the six flagship models tested, averaging 101 Mb/s.

Switching to draft 11ac on the 5 GHz band we were similarly underwhelmed by a limited 408 Mb/s at close range, followed by a poor 212 Mb/s at 10 metres. This placed it behind the somewhat slow and budget-priced TRENDnet TEW-818DRU.

The router’s USB performance was good, joint second-best on test with 51 MB/s read speed and 34 MB/s for writing large sequential files. Power consumption was the highest of the group, drawing around 11 W when idle but rising to 16 W under some wireless activity. See also Best routers of 2014. 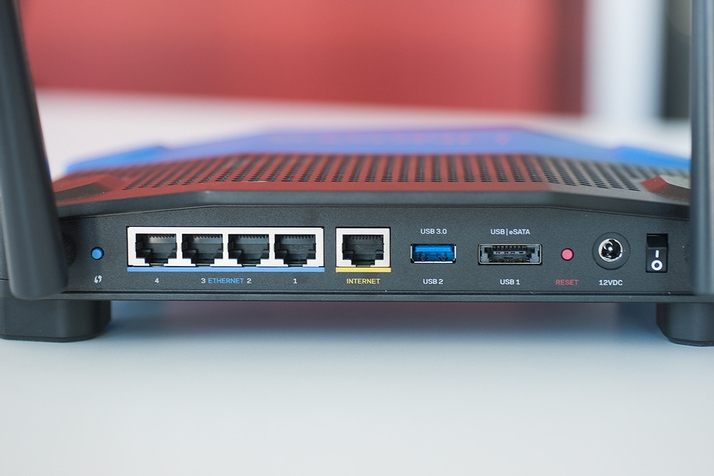