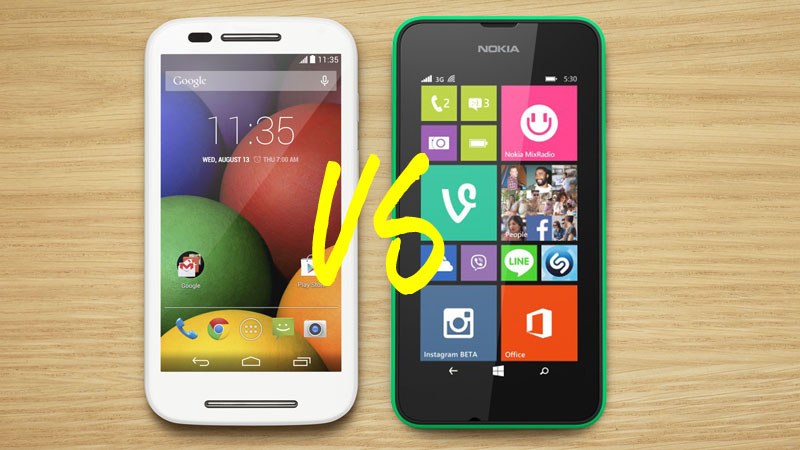 Choosing between the Nokia Lumia 530 and Motorola Moto E is difficult. I’m a seasoned Android user, but I like what I see in Windows Phone 8.1. And without that tired old Windows Phone lacks apps argument (the Motorola Moto E doesn’t have enough built-in storage to take full advantage of what Google Play and third-party developers have to offer), there is nothing that you might expect of a budget smartphone that either Windows Phone or Android are unable to do. In many respects these two phones are very evenly matched. The Motorola Moto E stands out for its display, while the Nokia Lumia 530 is the winner on the storage front. And the Lumia 530 absolutely wins on the pricing – you cannot argue at £60.

Before we start, we should point out that in this comparison review we are merely comparing the specs of these two amazing-value smartphones. For more in-depth analysis check out our Motorola Moto E review, and come back soon for our Nokia Lumia 530 review.

Motorola’s Moto E is available now, and it costs just £89. The Nokia Lumia 530 is launching this month (August) at a tiny £60 in the UK. That puts a difference of £29 between these two cheap Windows Phone and Android smartphones, which is actually quite significant when you’re talking about two sub-£100 phones. For the best deal on either phone check out our Best SIM-only deals.

In terms of design the Motorola Moto E and Nokia Lumia 530 are very similar. Both are pebble-design smartphones with interchangeable colourful rear cases (sold separately). The Nokia is slightly lighter than the Motorola, at 129- versus 142g, and it’s also a little bit thinner at 11.7mm against the Moto E’s 12.3mm. The Moto E is also wider and taller, if only by a tad, at 64.8×124.8mm against the Lumia 530’s 62.3×119.7mm.

In the display category the Motorola Moto E is victorious, with a 4.3in qHD (540×960 pixels) panel with an anti-smudge and splashproof coating. This 256ppi screen also uses tough protective Gorilla Glass. The Nokia Lumia 530 uses a 4in (480×854) 245ppi LCD screen.

Without getting both handsets into our lab it is impossible to determine which is faster. The fact they run different operating systems is also important, since Windows Phone is traditionally able to run on lower-spec hardware than is Android.

For what it’s worth, both are paired with a 1.2GHz Qualcomm Snapdragon 200 chip, the Motorola a dual-core version and the Nokia a quad-core. The Moto E has twice the Lumia 530’s 512MB RAM allocation, at 1GB, and both run Adreno 302 graphics.

We’ve yet to run the Nokia Lumia 530 through our standard benchmarks, although performance from the Motorola Moto E wasn’t anything to write home about. That’s to be expected from a phone this cheap, although it’s worth pointing out that in everyday use the Moto E is mostly smooth and can quickly switch between apps. We saw only occasional lag.

In Geekbench 3 the Moto E turned in a multi-core score of 608 points. That’s higher than other cheap phones such as the ZTE Kis 3 and Samsung Galaxy Fame, but some way down on the 2014 flagships.

Web browsing, however, was rather jerky in our tests, and the Moto E took a couple of seconds to zoom in when you double-tap. It managed 1877ms in SunSpider, but that’s not the worst score we’ve seen. You can see how the Motorola Moto E’s performance compares to that of other recent smartphones we’ve tested in our article What’s the fastest smartphone 2014.

The Nokia Lumia 530 is the clear frontrunner on the storage front. Not only does its microSD support stretch to 128GB – the Moto E lets you add only 32GB – but it comes with 15GB of free cloud storage via OneDrive. Since both phones are supplied with just 4GB of internal storage you will need to look at other options for storing photos, videos and apps.

And on that front it’s also worth pointing out that while you can store apps on the Nokia Lumia 530’s microSD card, the Motorola Moto E will move only a small amount of an app’s data on to removable memory. This means you could quickly run out of internal storage if you want to download and run a lot of apps on the Moto E. (Of course, you could even now argue that finding more apps than for which you have storage won’t be a problem with Windows Phone.)

Neither of these budget smartphones will replace a dedicated camera. Their 5Mp fixed-focus snappers are handy to have on you for a quick shot, but don’t expect the best quality. The Lumia 530 supports slightly higher-resolution video than does the Moto E – 480×854 vs 720p, both at 30fps. Neither have a flash, and neither have a front-facing camera so selfies are out too.

The Nokia Lumia 530 and Motorola Moto E are evenly matched on the connectivity front. Both feature 2.4GHz 802.11b/g/n Wi-Fi, Bluetooth 4 and GPS. They both accept Micro SIMs, use Micro-USB for charging, and have 3.5mm headphone jacks. Neither are 4G-compatible – for a cheap 4G phone look to the Mototola Moto G or EE Kestrel.

Both smartphones run the latest versions of their respective operating systems (the Nokia Lumia 530 runs Windows Phone 8.1, while the Motorola Moto E has Android KitKat). The Moto E is guaranteed an upgrade to Android L when it becomes available in the autumn, and you can expect any Windows Phone updates to also be available to the Lumia 530.

A major difference between the two operating systems is apps. While Windows Phone is gradually getting more and more apps, it still lags Android. Of course, as we mentioned in the storage section of this comparison review, you’ll be able to store only so many apps on the Motorola Moto E regardless of what’s available.

The recent Windows Phone 8.1 update turns Windows Phone into a tempting proposition. We’ve always been fans of its colourful tiled interface, but the addition of proper notifications and the Cortana voice assistant, among other upgrades, is welcome. Of course, Android has had all this for some time now.

The Motorola Moto E runs an almost vanilla version of Android KitKat, with just a few tweaks. There are a few familiar Motorola apps, such as Motorola Migrate and Motorola Assist, while new to the Moto E is Motorola Alert. This can let people know you’ve arrived safely somewhere, you can use it to help meet a friend and there’s an emergency mode.

The Nokia Lumia 530 has some very decent preinstalled software. We particularly like the excellent Nokia Maps application with HERE Drive+ for free navigation, as well as MixRadio, which offers unlimited ad-free music streaming, even offline.

As with performance, it’s impossible to assess battery life without a thorough assessment of each smartphone. The Moto E has a larger-capacity battery at 1980mAh versus the Lumia 530’s 1430mAh but, as we mentioned earlier, not only do these handsets run different operating systems but they differ in their screens – a major culprit behind battery drain.

While we can confirm Motorola’s claims of up to 24 hours of mixed usage for the Moto E, we are unable to verify Nokia’s suggestion that the Lumia 530 can last up to 22 days on standby, or offer 10 hours of talk time. We’d expect that both phones would be more than capable of lasting a full day away from the mains, however.

One important difference is that only the Nokia Lumia 530’s battery  is removable. Whether anyone would actually carry around a spare battery for their phone is another matter. We’d much prefer to use a portable USB charger – check out the 9 best portable USB chargers 0f 2014.

Still not sure which is the best budget phone? Check out the 16 best budget smartphones of 2014.