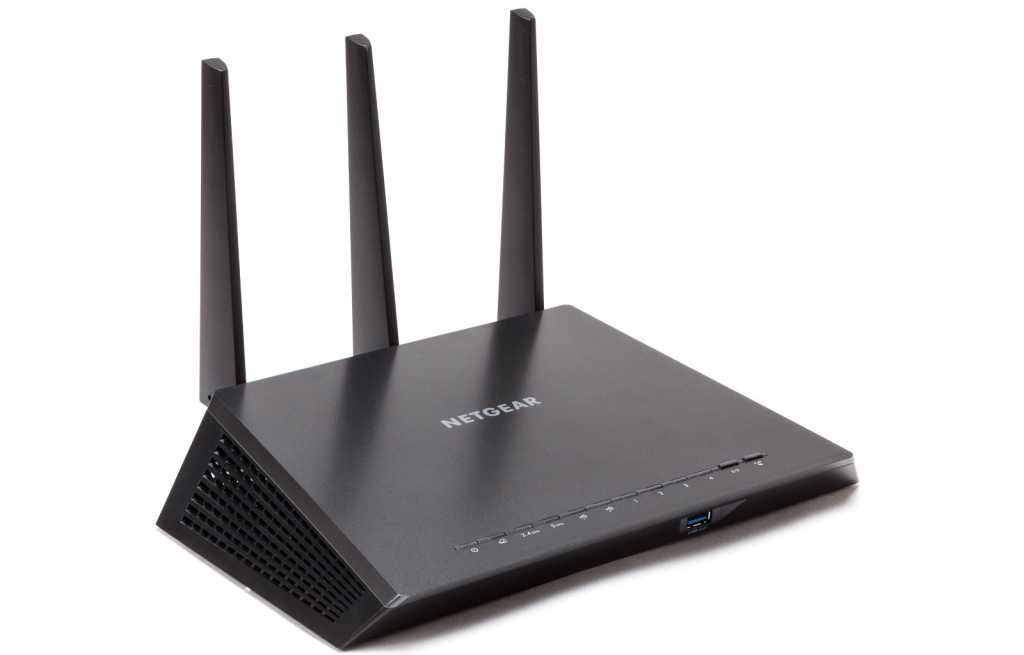 Netgear was one of the first companies to launch a draft 802.11ac wireless router in 2012, with the well-regarded R6300. Almost two years later, the fledgling Wi-Fi technology has only inched along but Netgear’s statement in noir seems to make good use of available components from its Broadcom supplier. Faster routers are available for 802.11n, but from every 802.11ac wireless router we’ve tested to date, the Netgear sets the benchmark of what is currently possible with the draft technology. 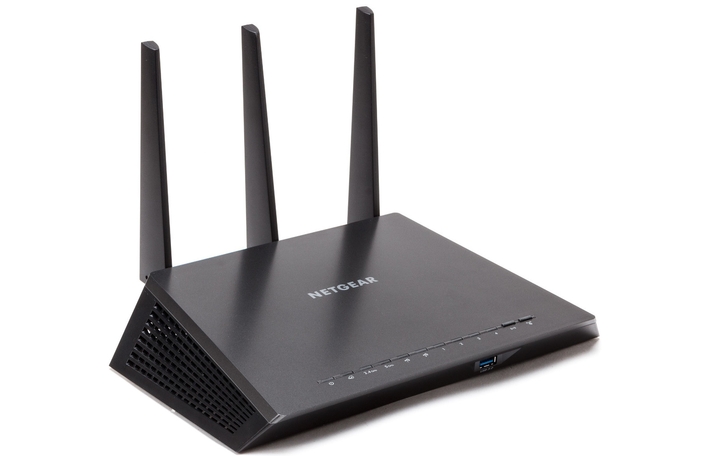 Once seen, there’s no mistaking Netgear’s latest flagship statement from the world of wireless routers. The R7000 – also known as the Nighthawk – is boldly styled after the Lockheed F-117 Nighthawk stealth strike figher, both dark and angular slabs with no parallel surfaces. See also Best routers of 2014.

Three large removable antennae span the router’s back plate, 163 mm-tall truncated triangles that are jointed at their base to allow even more rakish looks. We found best performance with the central aerial vertical and side aerials at 45 degrees outwards.

This is another ‘AC1900′ wireless router, based on the latest Broadcom silicon which includes a BCM4709 SoC with 1 GHz ARM Cortex-A9 dual-core processor. Like others we’ve covered before you can safely ignore the mendacious numbering and treat it for all practical purposes as an ‘AC1517′-rated router.

It’s a substantial-feeling piece of networking kit, weighing 854 g and sitting a low 285 mm wide. Cooling vents are found on the sloped side edges and underside, and also along the angled back plate.

Unlike the Apple AirPort Extreme and Linksys WRT1900AC which use internal fans, cooling of the Netgear is entirely passive. A large metal heatsink sits at the bottom of the unit, the source of the device’s high mass which helps ensure the stealth nature of the router extends beyond the looks.

Four gigabit LAN and one WAN port are offered here, plus one USB 2.0 port. Another blue USB 3.0 port is added to the front under the overhanging sloped top.

While the front USB 3.0‘s location makes ad-hoc plugging in of thumbdrives simpler, it would be a royal pain if you wanted to connect USB storage more permanently, as you’re left with an ugly cable dangling out from the front.

There’s no shortage of status LEDs running across the top deck, which will flash by default to indicate activity; these can be set to stay less distractingly solid, or turned off entirely in the comprehensive admin interface. At the right end of this light runway are two matching backlit buttons – for WPS, and most handily, to simply switch off wireless radios. That’s invaluable if you’re going out for the weekend, for example, and just want to switch off your network’s radio broadcasting. See all Wi-Fi and networking reviews.

Anyone who’s used a Netgear router in the last few years will recognise a familiar graphical interface for administrating the Nighthawk. Dubbed Netgear Genie, it comprises two main tabs to the left for Basic and Advanced settings, with a few options listed below the former and many below the latter.

Features suited to the ambitious power user include a VPN server based on OpenVPN. With this you could connect to your home network over an encrypted tunnel when away from home, and access local devices and surf as if you were inside your network. Unfortunately this protocol is poorly supported beyond desktop PCs, and Netgear states that it cannot support Apple or Google mobile devices. 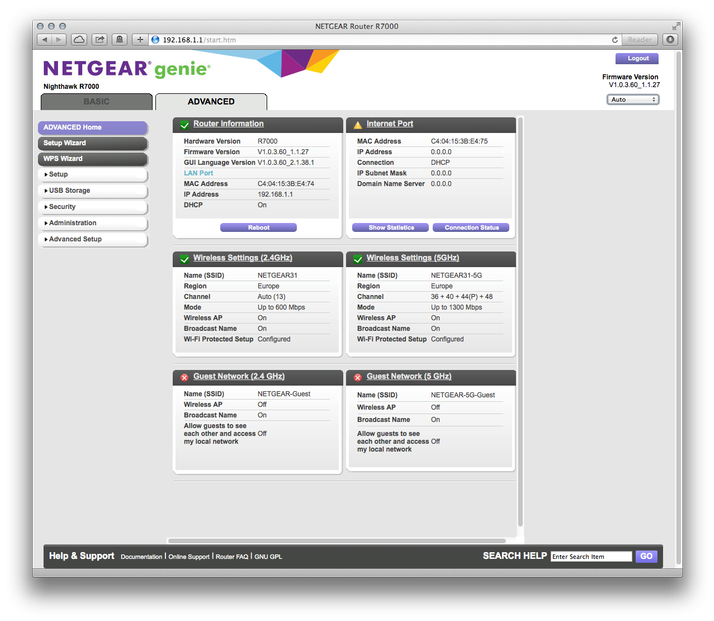 The complete feature list is long, with highlights that include various quality of service (QoS) options such as gaming and video internet traffic, and QoS for a particular LAN port or MAC address.

Parental Controls may seem like an odd feature for a router that’s styled for a teenage gamer, so we assume Netgear is just covering every possible purchaser’s needs. Here you can use OpenDNS to screen your web access at the domain name server level. You can also block websites with your choice of keywords in their URLs, or services over particular ports.

It’s possible to oversee the router with a reasonably comprehensive Netgear Genie app for iPad, which we found to offer easy and intuitive control of some of the router’s main settings. We still question why Netgear thinks it’s necessary to spy on the user’s location every time they use the app though. Netgear states that Genie needs to track your location or it can’t play music from the iOS device due to copyright restriction; even if that were true there’s no excuse for the nag when using any other feature. The app badgers you to enable Location Services every time it’s opened which is more than annoying.

Alongside the Apple AirPort Extreme and D-Link DIR-880L, the Nighthawk demonstrated the best short-range 2.4 GHz performance, averaging 171 Mb/s in our tests. Longer range performance in the 10 m test – still over 2.4 GHz using 802.11n – remained excellent, beaten only by the class-leading Apple AirPort base station here (159 Mb/s), and averaging 137 Mb/s over both traffic directions.

This kind of top-tier wireless performance continued when set to draft-11ac mode – nigh-on 600 Mb/s at 2 m, with its 592 Mb/s average result. And over the 10 m range we saw the least diminuition with distance to date, as the Nighthawk recorded speeds of 365 and an impressive 511 Mb/s, for client-to-server and vice-versa traffic respectively, for a final average of 438 Mb/s.

The R7000 has probably the best USB storage performance of any wireless router right now. That’s not saying a great deal considering the current state of this facility across all routers. It’s still a tiny fraction of what USB 3.0 promises, but 56 MB/s to download files over an ethernet connection is better than the rest, with uploads ambling behind at 35 MB/s.

Despite the chunky 42 W wall-plug power supply the Netgear Nighthawk also proved suitably frugal in its power consumption, drawing around 9-10 W from idle to loaded. See also Best routers of 2014.