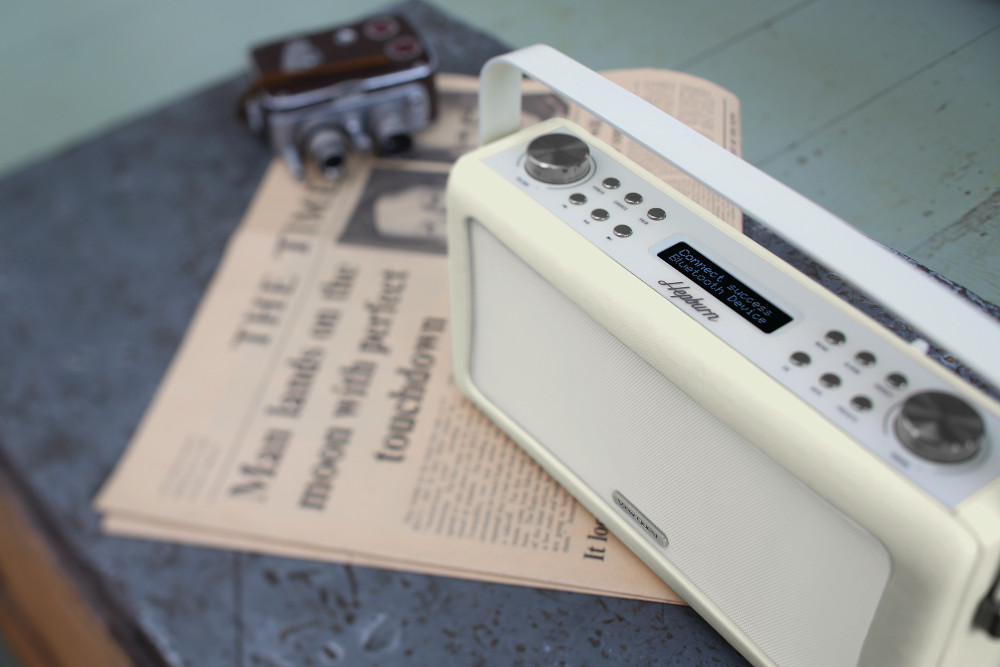 The View Quest Hepburn is an on-trend vintage accessory that copies heavily from the Roberts Radio line of classic kitchen radios. It offers several ways to hear music and impresses with its range of sources if not so much by its sound quality. It’s by no means the worst of the Bluetooth breed but the high price reflects the radio’s fashion statement more than its enduring musical talent. 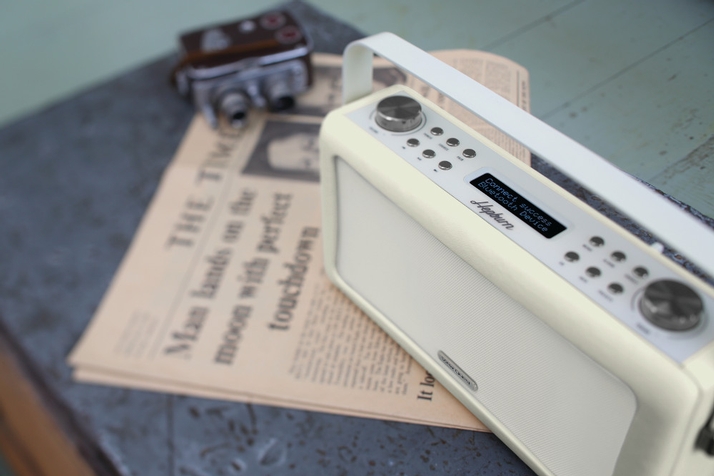 Like Hollywood actresses Katharine and Audrey, there’s no relation in the Hepburn name here, save a chance to conjure a classy sounding image for a retro-styled kitchen radio – with some new-style features. (See all audio reviews.)

The View Quest Hepburn is certainly a classic-looking design, copying the 1950s look of the famous Roberts Radio. More specifically, the look of the Hepburn is based on the Roberts Revival model, still in production today in DAB/FM form.

The View Quest Hepburn is likewise a portable radio, powered by a mains wall-plug adaptor as standard, or you can load four D cell batteries to use it on the move. Given the retro look, we’d suggest you try fitting complementary HP2 batteries.

Even the price is aimed at the Roberts original, cheekily undercutting the £160 Roberts Revival by a potentially decision-swaying tenner. But the Hepburn offers even more wirelessness – namely the achingly trendy drift toward Bluetooth audio connectivity.

Its Bluetooth audio capabilities are limited though. While the Bluetooth feature gives another string to the salesman’s bow, View Quest has fitted a basic version of this poor alternative to a length of interconnect cable. The Flairmicro module inside is for ultra low-cost devices, and only seems to support the lowest quality SBC codec. Consequently, any music sent over this link is reduced in quality like a low bitrate MP3.

Besides playing music over Bluetooth the Hepburn is at heart a radio for either analogue FM or digital DAB broadcasts. We found its FM tuner was not very sensitive and struggled to pick up radio cleanly from our central London offices. (See also: Freeplay TUF review: wind-up radio and torch will charge your smartphone’s battery.)

We heard strong background hiss on many programmes, which can be reduced slightly by switching reception to mono. We had to hunt for it though – it’s not a simple button toggle on the top panel; you must instead go through the radio’s layered menu system to find the Forced Mono setting.

Tuning manually is not always easy since the output mutes temporarily as you move in 0.05 MHz increments, making it tricky to simply sweep through for a likely station. You can tune automatically though by first twisting the tuning knob and then pressing it down to send it searching for stations. In short, a true analogue FM radio is more user friendly for finding stations.

A two-line LCD display gives feedback on which stations are tuned, and volume is shown when the knob is adjusted, as a linear range of empty and bold squares. The display is poor grade and can only be read clearly when you look directly down upon it.

A useful control feature is available with an iPhone app, which connects to the Hepburn using its Bluetooth link. With the View Quest app you can switch between sources and adjust volume. Tuning of FM and DAB radio stations is  also possible. Usefully the DAB station graphic is shown on the app too. We didn’t see any added station detail in FM mode but this may have been because reception was too weak to glean any RDS data.

Build quality is serviceable enough, finished in imitation padded leather front and back, although contrary to the manufacturer’s specification the case construction is entirely plastic throughout, rather than as listed with a ‘wooden case for quality acoustic sound’. (See also: 3 of the best portable chargers: a solar power charger, a hand-cranked charger, and how to charge your phone by fire.) 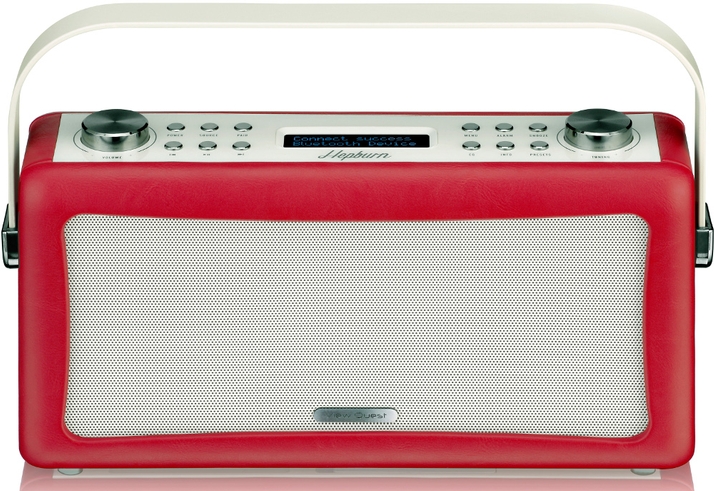 As a portable kitchen radio, hope for high-quality sound cannot be held high and the Hepburn did meet modest expectations.

The overall overall tone was like a low-cost transistor radio, with little bass although treble sounded reasonably well extended. Inside the radio is a stereo pair of small speaker drivers described as NXT Balanced Mode drivers – these 58 mm square units are designed to blend the effects of a distributed-mode loudspeaker (DML) with traditional moving-coil diaphragm.

In other words, they add some of the virtues of the commercially unsuccessful flat-panel speakers first vaunted in the late ’90s by British-founded NXT Loudspeakers, borne out of hi-fi brands Cyrus and Mission. These flat speakers have an omnidirectional nature with very wide and even sound dispersion.

Amplifier details are not given but the low power consumption and tiny cool-running circuitry suggest the specified 10 W per channel is from a Class D module.

With DAB stations the radio had a thinner and slightly brittler sound, even when tuned to BBC Radio 3 with its highest broadcast bitrate. Compared to analogue radio, DAB could sound annoyingly tizzy.

Music sent over Bluetooth could sound somewhat grainy and on-edge. With FM received poorly in our location and DAB proving again to be far from high fidelity, we found best sounding results were heard from an external audio input, plugged into the 3.5 mm auxiliary jack at the back.

Dictation was clear enough for spoken radio commentary, and there was no euphonic chestiness to male voices, for instance. But some of the curious effect of NXT speaker technology could also be heard much of the time – the Hepburn had an unusually wide sound dispersion characteristic, such that tonal quality was broadly the same wherever you heard it in the room. This is in contrast to most speakers that tend to focus their sound forward, with reduced treble as you wander off axis from the speaker drivers. The Hepburn didn’t really have a particularly sweet tone but it did stay consistently lacklustre from a range of listening positions.

Lest we are accused of taking musical quality too serious for this piece of audio equipment, we were reminded that it’s about more than just sound. ‘At VQ we believe that colour is an important part of who we are’, reads the product description, suggesting that decent sound is perhaps not the principle goal. To wit, the View Quest Hepburn is available in seven different colour finishes, from black to light cream via a light powder blue, leathery brown, mustard, brick red and horizon blue finish. (See all Digital Home reviews.) 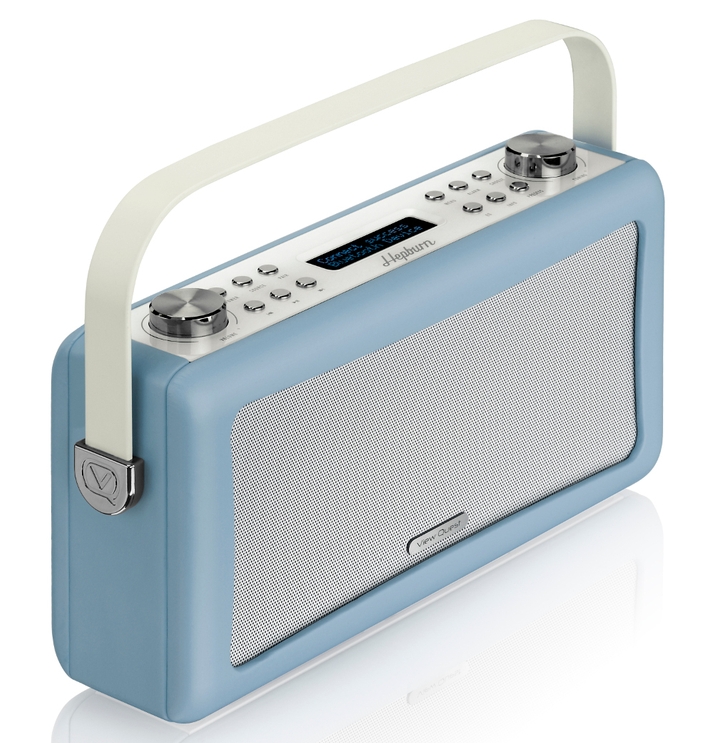