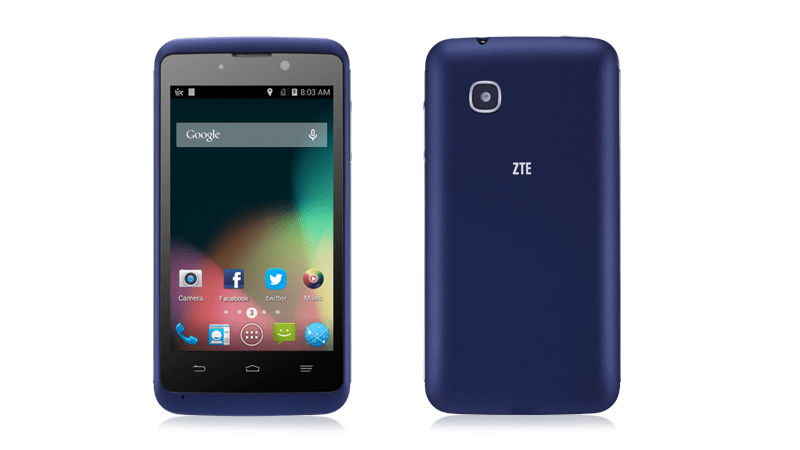 If you want a smartphone to do the basics at the cheapest possible price, the ZTE Kis 3 is the phone for you. It’s surprisingly decent considering how cheap it is. Forget the camera, but performance is good and it doesn’t look too bad either. Those wanting something more decent should look at the Moto E, Lumia 630 and EE Kestrel.

Motorola set a new benchmark for budget smartphones with the launch of the Moto G and until recently anything under £100 wasn’t really worth consideration. However, the Moto E and  Nokia Lumia 520 are both good options. The Nokia Asha 503 is cheap at £59 but isn’t worthy of your time.

If you have even less money in your wallet to spend on a smartphone then the ZTE Kis 3 is amazingly cheap. It has an RRP of just £59 but you can get it on a Pay-As-You-Go basis from Virgin Media for £44 with £10 credit included.

That’s a pretty good deal but the phone is also available at Argos for a slightly mind blowing price of £39. ZTE calls it ‘ultra-affordable’ and it’s not fibbing.

As we said at the beginning, this is the most affordable and dirt cheap smartphone which we’ve reviewed but that still doesn’t mean you should buy one so read on to find out what your small amount of money will get you.

It’s absolutely no surprise to report that the design of the Kis 3 is nothing special. It looks like a relatively old smartphone with a chunky and fairly unattractive bezel around the screen and an obvious hole for the microphone in the plastic frame.

There are some attempts at style though and we quite like the dark blue colour of our review unit and there are silver strips down the sides which actually don’t look too bad.

Despite almost every modern Android smartphone now using on-screen buttons, ZTE has stuck to the old style of capacitive ones which sit below the screen. This may be the unorthodox way of doing things now but it does provide more space on the display for other content. Strangely the menu button lives on even though the overwhelming trend is a switch to recent apps, instead.

Needless to say, at this price, the build quality is distinctly plastic and the device certainly feels cheap and somewhat flimsy. And yes, it’s a chunky little customer at 10.7 mm. However, the Kis 3 feels fairly nice in the hand and isn’t too heavy at 154 g (it feels lighter).

Due to fairly large bezels, the ZTE Kis 3 has a pretty small screen at just 4in – the same as the iPhone 5 and later. It has a low resolution of 480 x 800, dull colours and very poor viewing angles – you really need to be looking directly at it to get anything done. On the plus side, it’s surprisingly responsive for a display which is set far back from the glass and has a good amount of brightness on offer.

In terms of storage there’s 4GB of built-in memory which is the lowest you’ll find in a smartphone. About half of that is available to use for storing apps, games, photos and other things. If you do run out of space, though, there is a microSD card slot which means you can add up to 32GB more. In the storage section of the settings menu you can tell the phone to save items to the memory card rather than the phone.

In charge of providing power is a 1.2GHz dual-core processor and 512MB of RAM and we weren’t shocked at a score of 599 in GeekBench 3 which is slightly lower than the Moto E. However, we were pleasantly taken aback by the Kis 3’s performance of 12fps in the GFXBench T-Rex test – higher than the HTC One mini 2!

Overall performance is perfectly usable, if you keep to the basics. Things take a while to load – a slight delay on most things which aren’t basic like switching between apps – but we were able to play Despicable Me Minion Rush from the microSD smoothly (once it’s loaded). Web browsing is normally a big downfall for cheap phones but even with a slow time of 1722ms in SunSpider, we didn’t find the experience frustratingly slow, including when switching to full desktop sites.

In terms of battery life, there’s a small capacity but removable 5.2Wh (1400 mAh) Li-ion battery which for most users will get you through the day. We didn’t expect anything more from a smartphone this cheap.

There’s little else to talk of in terms of hardware at this price with just basic Wi-Fi, Bluetooth and A-GPS on-board. Things are limited to 3G in terms of data so if you’re looking for a cheap 4G LTE smartphone, you’ll have to spend quite a bit more.

Like the Moto E, a money saving technique is to only have a rear facing camera so you can still take selfies, it’s just a lot harder. The ZTE Kis 3 has a 3Mp camera with no LED flash and it’s a pretty bad piece of kit. There’s no auto focus and the detail on offer here is poor so you may be embarrassed to share shots from it on social networks.

One of the reasons why the ZTE Kis 3 is able to offer reasonable performance is the choice to run an almost completely stock Android, and it’s remarkably the latest version, 4.4 KitKat.

This means things aren’t complicated with a customer user interface, or skin, slapped over the top. We say almost, because the lock screen is slightly different with a long press to unlock and a set of app icons which can be swiped in from the side.

There are some Virgin Media related pre-loaded apps which you can’t delete. It’s not a big deal as they don’t take up much space.

With the strange array of buttons (see design and build) it’s a little tricky to use some of Android’s built-in features. You’ll need to long-press menu (the far right button) to access recent apps, and long-press the home button to get to Google Now – you can’t swipe upwards from the bottom of the screen like normal.