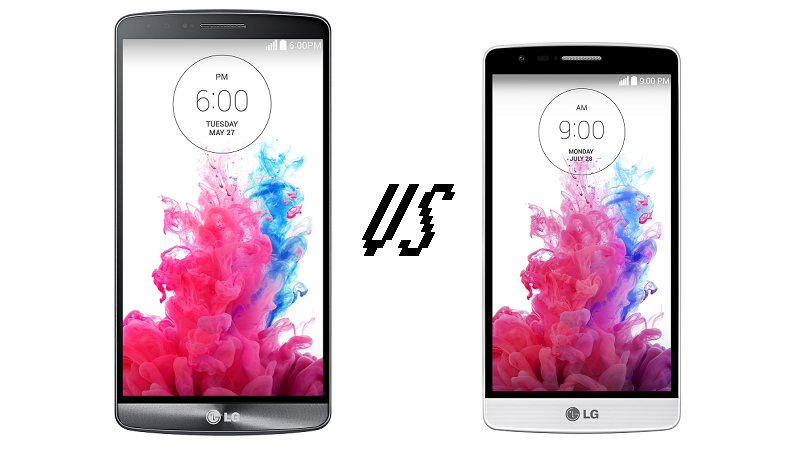 You will save just over £100 by opting for the more affordable LG G3 S over the flagship device. However, there are downgrades left, right and centre so you might want to save up the extra to get the best smartphone around. The G3 S only has a 720p resolution display, less storage, punier components, a lower res camera and is missing items like the IR blaster and wireless charging.

Most smartphone makers launch mini versions of flagship devices but Sony has the Xperia Z1 Compact and LG has opted to go with a G3 S (or Beat in some markets). Here we compare the full-size  LG G3 with the new cheaper alternative LG G3 S. See also: The best phones you can buy

Mini smartphones are now a standard part of the mobile market, offering consumers a cheaper and lower spec version of a firm’s top-end flagship smartphone. The LG G3 S is effectively the LG G3 mini. It hasn’t launched in the UK yet so we’re comparing specs here.

When the LG G3 launched it was £479, a good price cheaper than rivals since flagships tend to be between £500 and £600. As per usual, that price has gradually dropped and you can pick the phone up for around £430 but GSM Nation has the G3 for just £409.

Despite the price drop, the G3 S is still a cheaper option and although LG hasn’t given a specific price, Mobile Fun has the device up for pre-order at £299 meaning it matches the affordable  Nexus 5 from Google which was built, incidentally, by LG.

So you’ll save more than £100 by opting for the G3 S over its bigger brother but that’s just the start so read on to find out what sacrifices you’ll have to make.

As you can see from the photo, the LG G3 S is essentially a mini version of the full-size smartphone. It looks like same with thin bezels and the physical buttons mounted on the back but is a smaller handset overall.

The amount of RAM varies on the G3 depending on what storage capacity you buy – 2GB at 16GB and 3GB at 32GB – but you’ll just get a flat 1GB inside the G3 S. It’s clear that the flagship G3 is more powerful but that doesn’t mean the G3 S will struggle to perform.

The main reason the G3 S is smaller is its screen size. It’s 5in which is perhaps why LG chose not to brand it with a ‘mini’ title. The full-size G3’s display is half an inch bigger at 5.5in which sounds massive but those thin bezels mean the device is no bigger than rival like the Sony Xperia Z2.

The bigger difference is in the resolution as the G3 features an impressive Quad HD display – a resolution of 2560 x 1440 and a pixel density of 534ppi. It’s the highest resolution smartphone money can buy. If you opt for the G3 S, you’ll just get HD (1280 x 720) which is a lot less pixels – four times less than its bigger brother as the Quad HD name suggests. The 5in screen size means a not so attractive pixel density of 294ppi.

There are yet more downgrades when it comes to storage as the G3 S comes in just an 8GB capacity while the G3 offers both 16- and 32GB variants. Both phones have a microSD card slot but the full-size G3 can accept cards up to 128GB while the G3 S is limited to 64GB.

The LG G3 S has 4G support, Wi-Fi (although not 11ac), Bluetooth 4.0 and NFC but there’s no sign of an IR blaster or wireless charging which are both found on the G3.

As you might expect, the G3 S has a lower resolution camera compared to its more expensive big brother. Its 8Mp compared to 13Mp but LG has been kind enough to include the laser auto focus which was introduced with the flagship G3.

The G3 S also retains software features such as Gesture Shot and Touch and Shoot but on the video recording side of things is limited to Full HD compared to 4K. The front camera is also downgraded from 2Mp to 1.3Mp.

Software is an area where the two phones don’t really differ. Both run Android 4.4 KitKat with LG’s user interface which has a flat, modern style and uses the circle as a motif throughout. However, LG does add features such as KnockON (turn on the phone with a double tap) and apps like QMemo+.

It’s unclear whether any will be missing from the G3 S and out guess is that the device won’t be able to count your steps like the flagship G3.

As we mentioned earlier, the G3 S doesn’t come with wireless charging built-in and the battery itself is smaller 9.7Wh (2540mAh) capacity compared to 11.1Wh (3000mAh). With a different set of hardware, namely a much less power hungry screen, things are likely to be fairly even in terms of battery life.