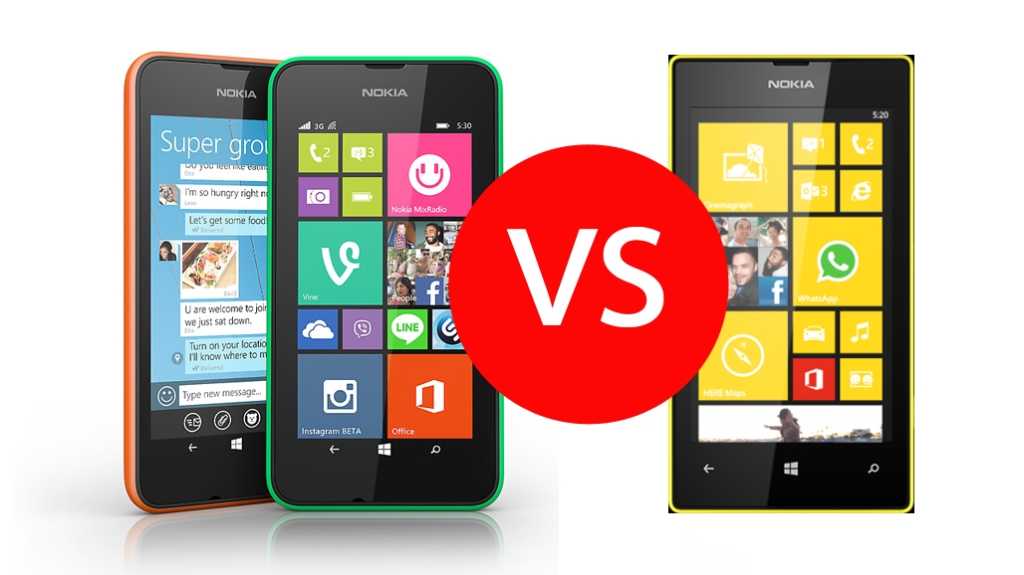 It’s too early to give a definitive verdict on which smartphone is better, but it’s almost certainly not worth buying a 530 if you already have a 520. We’ll bring you a full review of the 530 when we can get our hands on one, and we’ll update this comparison review as well.

First things first. The Lumia 530 is not yet available to buy in the UK. It will go on sale shortly at £60. This comparison review is based on our review of the Lumia 520, and the specifications and photos of the 530. (See our full: Nokia Lumia 530 UK smartphone review.)

With Windows Phone 8.1 comes a host of new features, not least of which is improvements to Bluetooth which means that Windows Phone now syncs with activity trackers such as the Fitbit One.

In turn, this means there’s an official Fitbit app and more are sure to follow.

The point I’m making is that Windows Phone 8.1 is great, and the Lumia 530 ships with it. The free update will come to the 520, but there are no guarantees. Currently only two Lumias can get the upgrade with the entire rest of the range ‘under testing’.

The reason you’re interested in the Lumia 530 (and 520) is their prices. The 520 is available unlocked for the tiny price of £80. The 530 undercuts it at £60 – a very tempting price for a handset running Windows Phone 8.1. Now some of the cutbacks we’ll see below begin to make sense.

The 520 has a 4in IPS screen with an 800×480 resolution. The newcomer also has a 4in screen, but with a higher – very slightly – resolution of 854×480. That’s because the three buttons at the bottom of every Windows Phone are now on-screen rather than being touch-sensitive hardware buttons.

Overall, then, there’s nothing gained or lost. But, there’s a catch: the 530 doesn’t have an IPS panel like its predecessor. Instead, it’s rumoured to use a standard TN display which would – in theory – have poorer viewing angles and colours.

The specs are confusing here. A quad-core 1.2GHz processor sounds better and faster than the Lumia 520’s dual-core 1GHz chip. But it probably isn’t and here’s why: the 530’s four cores themselves are the same as used in the Snapdragon 200 processor, whereas the 520’s twin cores are the same as the Snapdragon 400’s. It also means a worse graphics processor – the Adreno 302 against the Lumia 520’s 305.

We’ll have to wait and see how the Lumia 530 performs with real-world tests as well as in benchmarks to know for sure, but it doesn’t sound too promising.

Both smartphones have a 5Mp rear-facing camera, but the Lumia 530’s has fixed focus instead of the auto-focus in the Lumia 520. Fixed focus might mean you avoid the odd cock-up by the autofocus system, but it also means you won’t be able to take macro photos. (Note also that the 530 doesn’t have an LED flash, just like the 520. That means it can’t be an impromptu torch – a handy feature you’ll miss if your current phone has an LED.)

Compared to the 8GB of storage inside the Lumia 520, the 4GB you get with the Lumia 530 seems like yet another compromise. It’s not great news, but at least you can pop in a microSD card to add up to an extra 128GB. Plus, with Windows Phone 8.1, you can easily install apps on the memory card as well as using it for photos and videos.

It’s too early to give a definitive verdict on which smartphone is better, but it’s almost certainly not worth buying a 530 if you already have a 520.

If the 8.1 update is released soon for the 520, that will also be a great reason to opt for the older handset.

Of course, if you don’t already own the 520, the £60 price of the 530 could be very tempting – but there is some evidence of cost-cutting.

Some may prefer the updated styling of the 530, but don’t overlook the fact that it’s thicker than the 520 by around a millimetre. By all accounts the 530 seems like a series of compromises and it doesn’t beat the 520 in any area aside from the expandable storage.

We’ll bring you a full review of the 530 when we can get our hands on one, and we’ll update this comparison review as well.