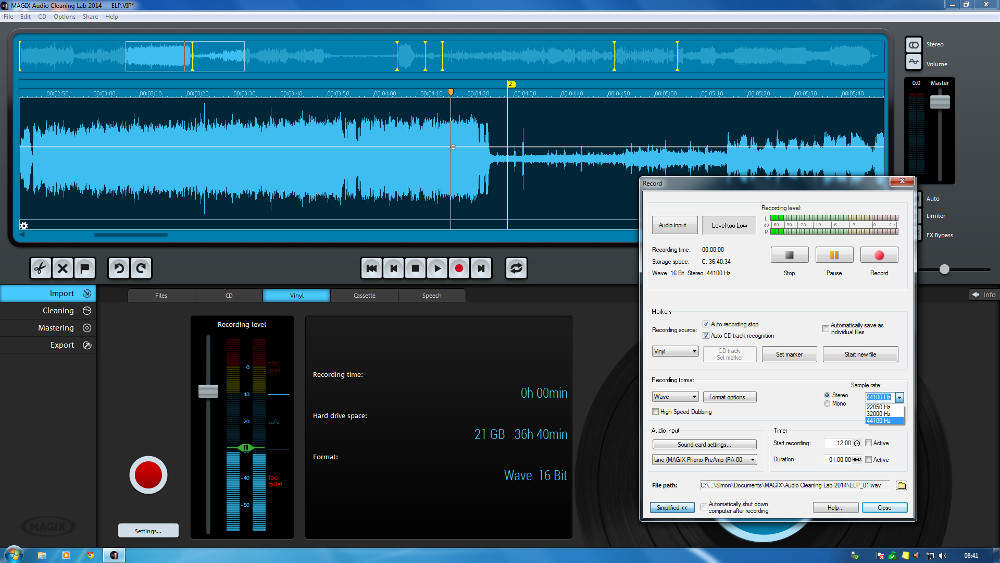 If you have a library of cherished music on disc or tape and want to transfer it and tidy it up at the same time, Magix Audio Cleaning Lab 2014 does the job with a minimum of fuss. If you don’t want to use the automated options or the presets, there’s enough individual control to be able to tweak the parameters you want.

Magix has been a big player in consumer sound editing for many years, with wave editors and sampling studios, but it also deals with older, pre-recorded media, so you can take beloved vinyl and cassettes and digitise them for use on PC or mobile devices. See all audio and music software reviews.

Magix is good at interface design and the main editing interface is a single screen, onto which different panels are overlaid as you need them. The full waveform of the current recording is shown in the top half of the screen, with controls below. The main modes of the software are Import, Cleaning, Mastering and Export and the program supports five types of media: files, CD, vinyl, cassette and speech.

The software can import wav, mp3, wma, aif, ogg vorbis, m3u, cue, cd-a and flac format files and export in most of those, plus aac and several DVD formats. Under CD, the software uses the FreeDB database to recognise and download the track names.

It would be good if you could download FreeDB info by album name, to shortcut the mastering of vinyl and cassette copies, too. See all software reviews.

Once you have the tracks loaded, you can work on the whole file or subdivide it into tracks or manually select sections. The software tries to auto-mark tracks, although it has problems with some progressive rock concept albums from the early 70s. Shame.

The Cleaning mode offers modules like DeClicker, DeCrackler and DeHisser, which as well as providing simple knobs to set levels, also have a series of presets like ‘Only remove heavy clicks’ and ‘Old tape recordings: Pop’ to simplify setup. If you have even less time to tailor settings, the Auto Cleaning button analyses the sound and suggests levels for the main cleaning tools. You can preview the results and do direct before and after comparisons.

The presets work pretty well, with obvious improvements to the sound, although you can hear slight drop-offs in bordering frequencies when clicks are removed, for example. There are few auto-repair apps which don’t do this, though.

Mastering mode provides other tools, such as expanding the stereo stage, boosting the ‘brilliance’ of old stereo recordings and adding reverb. Again there are presets available and an Auto Mastering button lets you select music type with, oddly, three settings alone for 70s disco.

The software uses a 16-bit A-to-D converter with 44.1 kHz sampling frequency, which is CD quality and should be adequate for most uses. Audiophiles – who insist on more faithful capture at, for example 24-bit/96 kHz resolution for their Naim amps and Quad electrostatic speakers, will need to look elsewhere.

The pre-amp in Rescue Your Vinyl & Tapes is powered from the USB port and has phono inputs for a record player, and line-level phono and mini-jack inputs for a tape deck. There’s also a headphone socket for monitoring straight off the deck.

We had trouble with two samples of the USB audio capture device, both of which had an audible hum at around -30 dBA, clearly audible on recordings. Comparing it with a straight phono-to-phono, battery-powered pre-amp from an earlier version of Rescue Your Vinyl & Tapes, there was no audible hum. See all audio hardware reviews.