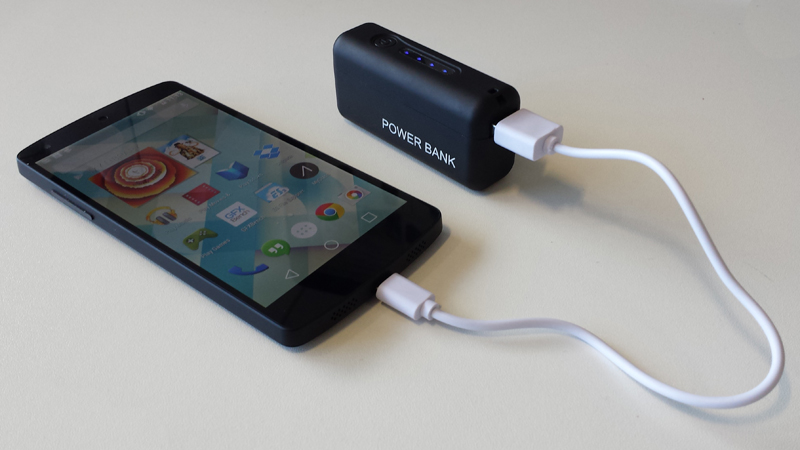 Olixar’s Power Bank isn’t as cool-looking as the Pebble SmartStick+, yet it gets our vote for being not only cheaper but working faster. Easily portable, this is the type of device you can carry with you every day and your phone will never run out of power. Look elsewhere if you want to charge multiple devices or tablets, however.

The enCharge Power Bank from Olixar is an ideal portable phone charger not only for overnight trips, but also to give your device that extra bit of power to help it last all day. Also see:  Best power banks 2018.

At just 75x33x24mm and 58g, this tiny Power Bank can be thrown into a bag or pocket and you won’t even notice it’s there. A small black box with a soft-touch casing and rounded corners, the enCharge also features a built-in torch and four LEDs to show you how much capacity remains. Also see: 37 best smartphones

It’s functional-looking rather than stylish, and its appearance isn’t as cool as that of the Pebble SmartStick+ (nor does it hold as much power as that 3000mAh portable charger), but it costs half the price, is able to more quickly charge both itself and other devices, and is unlikely to scratch as easily. The enCharge feels reasonably sturdy, and we could hear nothing rattling inside.

A short Micro-USB cable is provided, allowing you to both charge the device and your phone, although if you’re using an iPhone or a mobile phone with another proprietary connector you’ll need to provide your own USB cable.

A 2000mAh capacity allows the enCharge Power Bank to provide many smartphones with a single charge, and it’s 1A output is ideal for such devices. Exactly how much the Olixar will charge your device will depend on the capacity of your phone’s battery. You could also use it to charge a camera or an MP3 player – or anything with a USB charging connection.

That said, if you are wanting to also charge a tablet you’d be better off with something that has both additional and faster outputs; although it was recognised by our iPad mini, with only a 1A output the enCharge Power Bank would take a long time to charge a tablet. We recommend the 10,400mAh Lumsing Power Bank, a dual-output portable USB charger that is a little cheaper than the enCharge, if also larger and heavier.

In terms of value the Olixar enCharge Power Bank has got it spot-on. At £19 from MobileFun.co.uk, we really can’t argue with the price.

Also read our tips on how to improve smartphone battery life.