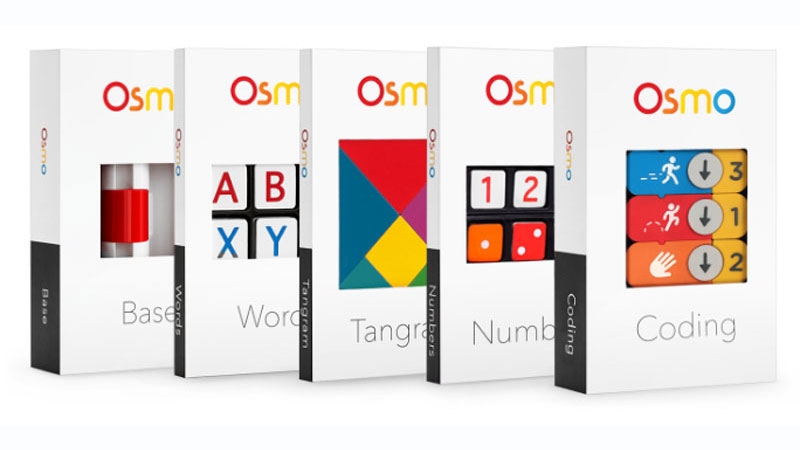 Osmo is a fantastic new type of gaming on the iPad. It’s physical and stretches a child’s mind while also being a lot of fun. Parents are rightly concerned about the amount of screen time their children spend in front of the TV, computer, smartphone and tablets. Osmo uses the iPad less for its screen than its ability to let people interact physically in front of it. The iPad’s screen seems secondary to Osmo’s game fun, creative and educational playing pieces. It’s a game that will be enjoyed by all the family.

Osmo is a new, fun and educational gaming platform for kids, which feels like a real game changer. It’s a simple idea done brilliantly well, and will appeal to parents who prefer their children to be a bit more active with their iPad games.

It’s a combination of hardware and apps that bring the iPad to life in a way that most app-only games can’t match.

Tangible Play’s Osmo brings iPad gameplay to life by being very hands on and physical. Instead of swiping and tapping players draw (on paper), pick up and throw (real) letter tiles, and fit geometric shapes (also real) together to create picture puzzles.

Osmo is aimed at children aged 6-12 but it’s just as much fun for adults, and younger kids can have fun too. Unlike most iPad games it’s one for the whole family to play together.

Osmo consists of a Base unit that you slot the iPad in portrait mode, and a little plastic mirror cap that fits over the camera so the iPad can ‘see’ what’s happening on the table below. It’s neat idea that has lots of potential.

It’s super easy to set up, and the simplicity hides what is really a great idea for transforming the iPad into something new. It pushes the virtual world of apps back into the real world of children’s games. Maria Montessori would approve.

It’s all done with a small mirror that deflects the iPad’s camera to the playing area – no Bluetooth, charging, or Internet required.

Take a look at this Osmo video to get understand the whole system.

You can buy Osmo in various versions, including some or all of the Osmo games: Words, Tangram, Newton, Numbers, Masterpiece, Coding, and Pizza Co.

In the US you can buy the $225 Complete Kit, which includes: Words, Tangram, Newton, Numbers, Masterpiece, Coding, Monster, and Pizza Co.

Buy direct from Osmo, from the Apple Store, or from retailers such as Amazon.

The whole package is worthy of Apple’s design team. The boxes are white and minimal like the games themselves, and subtly connect together magnetically.

Also read: How much screen time is safe for kids 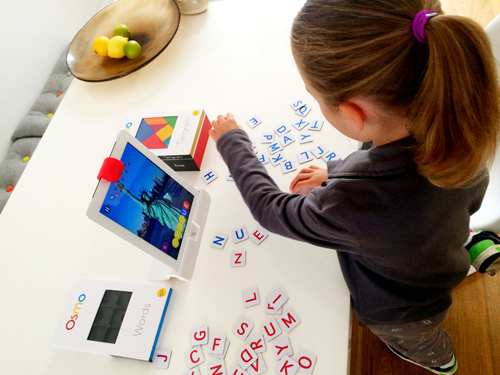 Words is an app plus the pack of two coloured alphabet letter tiles. There’s a red set and a blue set for competitive or team games. You could also play the game on your own, but the real fun is in the competition. This is one for the whole family.

The screen shows a photo and you have to spell out the word it represents by placing – or sometimes desperately throwing – the letter tiles in front of the iPad for Osmo to see.

The challenges get harder as the game progresses, and the words to find get more subtle – although rarely out of a child’s vocabulary. (The were a couple of words that we thought only Americans might know, but on the whole it works well for UK players, too.)

If you keep making mistakes or have trouble thinking of the words, then the game lowers the difficulty level again.

Words encourages looking and thinking, with some spelling practice thrown in too. It’s a lot of fun.

When I said these games are physical, I mean it. My 8-year-old daughter was pushing me out of the way when she wanted to throw her letter tiles in front of Osmo to score before I could. Let’s just say it got competitive, fast.

If parents could add their kids’ school spelling lists into the mix – maybe with audio rather than photo images – Words would be worth the whole Osmo price on its own.

Tangram is an ancient Chinese game of making geometric pictures out of flat shapes.

It’s another example of Osmo’s physical and visual strengths. Osmo shows you the pattern and you need to recreate it using the supplied shapes.

It’s relaxing and pushes the player into concentrating and moving the puzzle shapes with their hands. It’s a very Monetessori approach, and quite calming (when you get it right!). 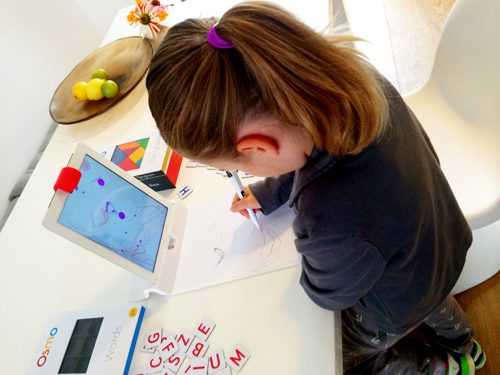 No, this Osmo game doesn’t turn the iPad into a Newton MessagePad – although how cool would that be?

Newton doesn’t come with a box and pieces like Words and Tangram.

All you need is the app, some paper and a pen or pencil. Scrap that… you need a lot of paper. If you really get into Newton you’d be wise to buy a small whiteboard to play with, and save your paper supplies.

Newton drops virtual balls from the top of the iPad screen, and you control their fall by drawing lines on the paper or even pacing objects in their way, so that they hit the desired targets.

Newton is another visual/physical game – with added audio as the balls hit the virtual surfaces – that requires more focus and thought than most kids’ iPad games. There are 60 levels to complete.

Osmo Masterpiece is a stunning art app for the iPad. Instead of kids drawing on to the screen, they are returned to the world of paper, pens and pencils.

Take (or import) a photo with the iPad, and Masterpiece turns it into outlines. You then draw on the paper but watching the screen, which shows your pen going over the outlines on screen. It’s hard to explain, despite it being super simple and clever. See it for yourself on this video.

Even better, you can then share and send Osmo’s video of you drawing via email.

Masterpiece certainly isn’t just for kids. Adults will love it too.

A recent Osmo game is Coding, which isn’t surprising as the people in charge of Osmo started out coding for Google.

Osmo Coding is like Lego meets popular visual-programming language Scratch. It uses simple blocks that magnetically snap together in front of an iPad and are interpreted as instructions that guide the game’s cute character Awbie on a journey to finding strawberries in a magical world of forests and beaches.

Each physical code block contains a unique command (walk, change direction, jump, grab) that can be sequenced with other commands. Combined with parameter, loop, and boolean (if-then) blocks, kids can easily make complex sequences for Awbie to follow.

Osmo Coding looks like a great introduction to visual programming, and there is a gateway to learning more complex programming rules.

If that sounds complicated, Osmo Coding isn’t, and will excite kids as well as teaching them something parents probably have no idea about.

Osmo’s latest game is Pizza Co (£39; $39). This is a hands-on experience for kids (aged 5 to 12) to learn entrepreneurial skills and financial literacy through augmented reality, plus some maths skills. It also claims to skill up emotional intelligence by making players handle customers at their virtual pizza parlour.

Pizza Co.’s fantasy land is inhabited by cute animals who love to eat pizza. Kids use a physical pizza tray, toppings and play money to fulfill orders and make change, trying to keep the customer animals happy and their pizza shop in business.It teaches business basics such as earning money, profit & loss, managing supplies and getting rewarded for good service.

It also helps with applied maths, especially fast addition and subtraction by making change for customers and fractions, in knowing how to complete complex pizza orders.

Tangible Play, the company behind Osmo, was created by two former Googlers and an ex-Disney executive.

Osmo costs from £75 for the Starter Kit with Base, Words, Tangram, Newton and Masterpiece.

The Genius Kit costs £89 (US$99) and includes those parts plus Numbers.

Buy direct from Osmo or via Amazon.