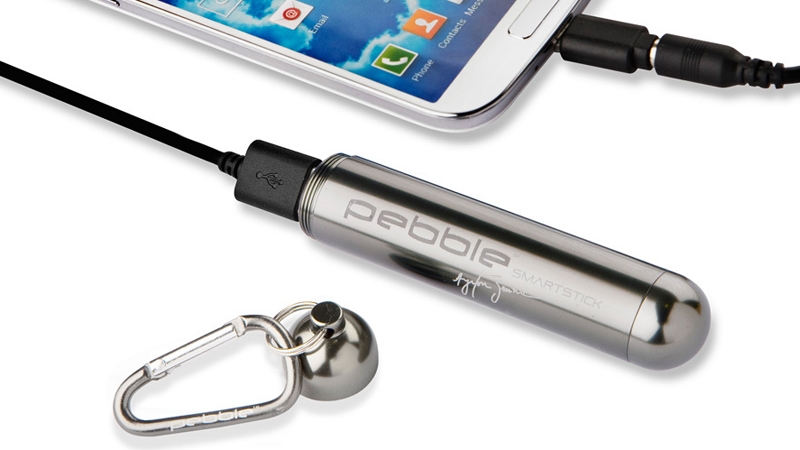 The Pebble Smartstick+ from Veho is a somewhat pricey but undeniably stylish portable charger for many of your USB-connected devices. Just be warned that it may not play happily with your tablet. What this special collector’s edition has to do with Ayrton Senna we’re not sure, but we do know that PC Advisor editor and F1 fanatic Jim Martin is now wearing the supplied-in-the-box Ayrton Senna signature pin with pride. (He isn’t really.)

The problem with smartphones that do just about everything is that they require ever-larger-capacity batteries to keep on doing everything throughout the day and into the night. And although phone makers are working on ways to improve battery life with extreme power-saving modes, and even Google is looking to improve battery performance with its forthcoming Android L OS, few of us will be lucky enough to own a phone that keeps going as long as we do. Also see: 37 best smartphones of 2014

Veho’s Pebble Smartstick+ is a 3000mAh portable charger that’ll provide a full charge for any smartphone, and potentially two for those with smaller-capacity batteries. It won’t charge either itself or your device in a hurry, however, with just 500mA input and output.

This isn’t a problem with smartphones, and you can simply leave the Pebble plugged in until the job is done. But it’s worth noting that some tablets will refuse to charge (such as our iPad mini) or will just take an incredibly long time to do so (such as our Google Nexus 7).

At £39 (and supplied to us by MobileFun.co.uk) the Pebble Smartstick+ is more expensive and carries less juice than some portable chargers we’ve reviewed, for example the £17 Lumsing 10400mAh Power Bank. But it’s far more easily pocketable and portable at just 84g, and it looks pretty cool, too.

The Smartstick+ is a smooth, metal stick with rounded edges and F1 driver Ayrton Senna’s signature emblazoned on the side. It’s supplied with both a carry case and a karabiner clip, so it’s up to you whether you shove it in a bag or attach it to your keyring.

The Pebble’s charging port is hidden below an end cap, which screws into place to prevent you losing it – at least until your phone is being charged, with nothing then tethering the cap to the Smartstick+.

The Pebble Smartstick+ is supplied with a short USB cable and three interchangeable connectors: Micro-USB, Mini-USB and a 30-port Apple connector. If you have an iPhone that uses the Lightning connection or another type of smartphone that uses a proprietary connection you will need to provide your own USB cable.

Under the end cap are in fact two ports: a Micro-USB input for charging the Smartstick+, and a full-size USB output for connecting your charging cable between it and your phone. When a device is charging you are notified on its screen, but there is nothing visible on the Veho Pebble itself to tell you it is working.

More usefully, when the Pebble is being charged one end glows red; when the battery is full it glows blue. The Pebble is sold with a full charge in any case, so you can get it up and running immediately.

We found the Pebble Smartstick+ became warm while charging up our smartphone, but not uncomfortably so.