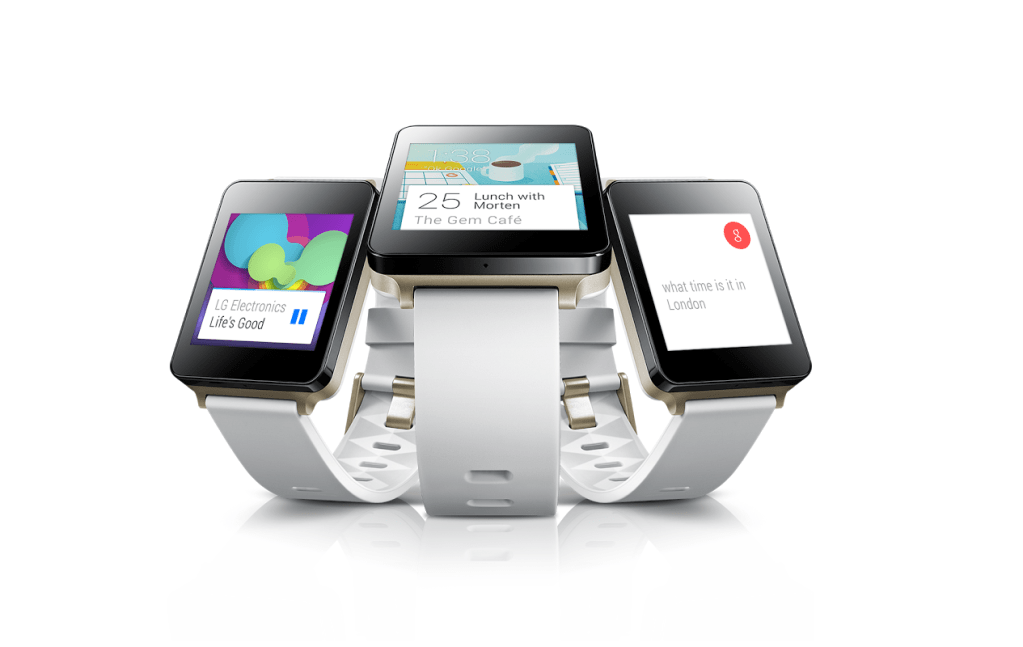 The LG G Watch is the best smartwatch we’ve reviewed so far, partly due to the affordable price tag and the excellent, albeit not flawless, Android Wear system. You will need a device with Android 4.3 or later, though. The design of the G Watch doesn’t wow so check out the Gear Live and the upcoming Moto 360.

Android Wear is upon us and is Google’s version of the popular mobile OS specifically designed for wearable devices like smartwatches. The LG G Watch is one of two launch products for the platform alongside the Samsung Gear Live so here’s our full LG G Watch review. Read: The best smartwatches of 2014: List of the best wearable tech you can buy right now.

The wearable sector is one of the fastest growing in technology and if you haven’t been convinced to buy a smartwatch yet, perhaps Android Wear is the reason you need. Smartwatches have been, at times, good but almost always lacking in some way or another.

As you might expect, Android Wear ties in with the main OS and aims to bring things forward in terms of both style and functionality. “Android Wear organises your information, suggests what you need and shows it to you before you even ask.” says Google. See also: What is Google Android Wear?

One of the advantages of Android Wear is that, if you like it, you can choose which device you want to buy with it on – much like you can pick from hundreds of Android smartphones.

As we mentioned earlier, the G Watch is one of two launch devices for Android Wear and it’s the cheaper option at £159. The Samsung Gear Live will cost you an extra £10 and is strangely the dearer across the pond in the US. That’s a pretty good price for smartwatch considering Samsung’s Tizen-based Gear 2 device is a lot more expensive. Our review sample was provided by MobileFun.

Although there are just two to wrack your brains over now, there will be more over time. Motorola has confirmed the Moto 360 – with its regular watch style round face – will launch this summer but it is expected to cost more than its Android Wear cousins.

Out of the three announced Android Wear smartwatches, the LG G Watch is certainly the plainest looking. It’s an understated square black slab with little going on – not even a button on the side. Perhaps this stealth style will appeal to some but to us it looks like LG’s design department got a basic idea together then went to pub never to return and finish the project. The ‘White Gold’ model is a little more interesting but is likely too feminine in appearance for male consumers.

Smartwatches tend to be a bit bulky and the G Watch is about the thickness of a smartphone at 9.95 mm. We’d rather it was thinner but it doesn’t feel too big when you’ve got it on. Weight isn’t a problem at 63 g.

The G Watch comes with a rubber strap which has a nice smooth finish making it more comfortable than most and less clammy in hot conditions (although it’s definitely not sweat-resistant). If for whatever reason you don’t like the supplied strap, you can change it for any standard 22mm replacement which is always a good feature to include. This way you could spend a few quid to improve things on the style front with perhaps a contrasting stainless steel strap.

With no physical buttons, it’s a little difficult to know what to do with the G Watch once you take it out of the box. To save you reading the instruction manual, simply put the watch on its charging cradle. There is a reset button on the back should you need it which you need a SIM removal tool or similar to push.

Last but not least on the design front, is the G Watch’s waterproof credentials. It has an IP67 rating matching the Samsung  Galaxy S5 smartphone meaning it’s completely dust tight and can be submerged in up to 1m of water for a maximum of 30 minutes.

On a practical level, this means you can leave the G Watch on in the shower or go for a paddle with it without worry. Possibly more beneficial is the ability to simply wash it under a tap if it gets sweaty or dirty.

Even though the G Watch is the least exciting Android Wear device in terms of looks, you get some decent specs for your money.

The most important element of a smartwatch is the screen which on the G Watch is an IPS LCD panel, 1.65in in size. It looks great with nicely popping colours and a decent resolution at 280 x 280 although we’ve seen better. The size is just about right in order to provide enough space for information but not feel too big on your wrist.

Although it’s advertised as ‘always on’ you can opt against this in the settings menu of Android Wear. It simply means you have to turn the screen on with a tap when you want it. If you do leave it ‘always on’ the device will automatically dim to conserve battery life.

Under the stealthy black exterior is a competent 1.2GHz Qualcomm Snapdragon 400 processor with 512MB of RAM. About what you’d find in a mid-range smartphone and we’ve had no problems with performance on the G Watch – it’s as nippy as you like and will also appear to be laggy if you companion smartphone or tablet doesn’t have a data connection.

The G Watch, as you would expect, connects to a smartphone via Bluetooth (4.0 Low Energy) and other specs include a 4GB of internal storage, a built-in mic, accelerometer, gyro and compass sensors and a 400mAh battery. We’ll talk about what some of this hardware is for later.

Like a smartphone, a smartwatch with an LCD screen will vary on battery life depending on how much you use it. We’ve been using the G Watch with the screen set to off to get the best possible battery life and it will easily last a few days without needing to be charged. Heavy users will get about 3-4 days use while lighter users will get up to a week.

As we mentioned earlier, the G Watch charges by way of a cradle. The watch sits in place easily thanks to magnets and charges via five small metal contacts. It works perfectly well and we’re impressed with how quickly the G Watch reaches 100 percent but if you don’t have the cradle then you have no way of charging up which can be frustrating.

Once you’ve turned the G Watch on for the first time you’ll be asked to select your language, then you’ll be prompted to download the Android Wear app to a smartphone or tablet. It’s free in the Google Play store.

If you have Bluetooth switches on, your companion device will easily find the G Watch and you’ll be paired up quickly. Following a quick and helpful tutorial on how to navigate Android Wear you’re away and ready to use the device.

It’s a wonderfully quick and easy process that even beginner Android users will be able to understand and follow.

It’s worth pointing out that the device which you want to connect the G Watch to needs to be running version 4.3 Jelly Bean or later. If you’re unsure about compatibility, visit g.co/WearCheck on your device before splashing out.

We’re onto Android Wear itself so bear in mind that the system isn’t exclusive to the G Watch while you read this section.

That aforementioned tutorial will get you up to speed with how to navigate and use the user interface but even if you breeze through it paying no attention you won’t find it hard or time consuming to get accustomed to Android Wear. The interface is extremely user friendly unlike some previous Android-powered smartwatches.

In a nutshell, it’s like have Google Now on your wrist and if that means nothing to you then Android Wear uses a card style system where each notification gets its own card. You swipe up and down through all the available cards to view them, swipe right to dismiss or clear on and swipe left for more information.

A slightly annoying thing is that there’s no way of recalling a card If you accidentally swipe it away. There’s also no way of choosing the order in which the cards are displayed either which would be nice.

One of the most common cards, for example, is weather and will show current information but swiping left will give you a four day forecast. Each card is given an appropriate background wallpaper which is a nice touch.

The main advantage of a smartwatch is getting notifications from your smartphone tablet without getting it out of a pocket or bag. Many smartwatch makers have tried to pack in too many additional features but Android Wear gets the basics right.

Since Android Wear is Android, it can automatically display any notification which arrives on your smartphone – no need to install anything. However, if you’re getting to many things through and getting annoyed you have two options: mute a particular app so you don’t get notifications from it on the watch or mute the watch itself putting it into do not disturb mode. This is done by swiping down when you’re on the main Android Wear screen with the clock – you can also check the date and battery level here.

You can see some sample cards above and you’ll no doubt notice that not all of them are plain notifications. With the on-board sensors, the G Watch can track your steps acting as an activity tracker and this is pretty much a permanent card unless you want to swipe it away.

There’re also various other things you can do with Android Wear such as controlling music playback. Tapping the screen when you’re on the main screen or saying ‘Ok Google’ will start a Google search, just like on Android smartphones and tablets. Here you can perform a vast number of voice commands which is where that built-in mic comes into play.

You can simply ask Google a question like ‘how tall is mount Fiji?’ but also tell it what you want to do. You could set a reminder, send a text message or email, take a note, set a timer or alarm, navigate to a destination and more.

The excellent voice recognition means that you rarely have to say things twice or cancel a message because it says the wrong thing. It even works well outside next to a busy road – if you don’t mind being seen talking your watch. However, mistakes do happen and the review period is too short meaning a message will sometimes be long gone before you’ve proofed it properly.

Although you don’t have to install apps specifically to your smartwatch, you can launch them – such as Google Keep. You can do this via a voice command but it doesn’t always work and you might not want to be shouting commands at your wrist. Strangely the touch-based way of doing it is right at the bottom of the voice search menu.

Overall, Android Wear is the best platform for smartwatches available but it’s not perfect. The good thing is that Google is highly likely to improve it over time, just like it does with the full blown Android.