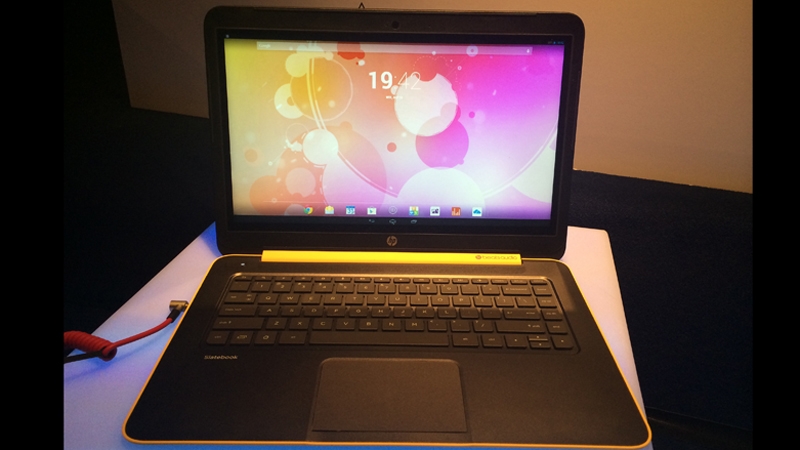 We can’t offer our final verdict on the HP SlateBook until we’ve fully tested it, but our first impressions are mixed. We love the look of the SlateBook, but the idea of running Android on our laptop is not something that really appeals to us. However, we’re sure that there are some consumers out there who’ve been hoping for just that – the familiar operating system and Google Play Store that they have on their tablet or smartphone right there on their laptop. It seems a little pricey for what it is, though, and we’d suggest looking into Chromebooks before making the decision to buy the HP SlateBook.

In June, HP announced that it would be launching a new laptop in August, and that this particular laptop would run Android rather than Windows or Chrome OS. We managed to get some hands-on time with the new HP SlateBook during the company’s HP Connected Music event on 23 July, so here’s our HP SlateBook review based on our experience with the laptop so far.

We’ll be updating this article with our full review once it arrives in the PC Advisor labs for testing, but for now, you can get an idea of what the HP SlateBook looks and feels like, what it’s like to use and what its specs are here in our hands-on review. See also: Chromebook reviews

The first thing you’ll notice about the HP SlateBook is that the company has decided to go for a bright yellow design. It’s the only colour available (although we expect that HP will consider launching new colours if the laptop proves to be a success), and probably won’t be to everyone’s taste. We rather liked it though – it’s vibrant, fun and not over-the-top. We appreciated HP’s decision to limit the yellow to the base/sides, hinge and HP logo, finishing the rest of the device in a smooth black (HP seems to call it Space Silver but it sure looks black to me).

Despite the fact that the HP SlateBook runs Android, it’s in no way a tablet. HP already offers several ‘hybrid’ products such as its Pavilion, Envy and Split, each of which can be used as a tablet or laptop by folding back the display or detaching it completely.

The SlateBook has a fixed hinge, so you definitely don’t want to attempt to bend it back on itself or remove the display from the keyboard. It’s simply a laptop with a touch screen display, but the difference is that it runs the familiar Android mobile OS.

It’s both strange and impressive, then, that the SlateBook sports a 14in display. It’s rather odd to see Android running on such a large screen, but actually it kind of works. We’ll talk more about the software later in this review.

Overall, the HP SlateBook is a good-looking device. Build quality is excellent, and the full-size keyboard felt great to type on. We also loved the large touchpad on the SlateBook. The wedge shape is ideal to help ease the pressure on your wrists, too.

The keyboard comes complete with handy back, home and multitasking keys just like those you find along the bottom of the screen in Android.

It’s pretty thin and light, weighing 1.68kg and measuring 1.59cm thick. That’s thinner than the MacBook Air, but a little bit heavier. If you’ve got a big enough backpack, you should be able to carry the SlateBook around with you all day without noticing too much extra weight.  HP is offering a SlateBook backpack with matching yellow detail as part of a bundle deal, too.

One big design downfall we noticed was that the hinge isn’t quite stiff enough to make using the SlateBook’s touchscreen an enjoyable experience. We’re not keen on using the touchscreen on laptops anyway, but for anyone that does use it, the wobbly SlateBook display will be irritating.

It’s time to take a look at what’s inside the HP SlateBook now, to help you get an idea of the performance capabilities of this new laptop. We’ll be bringing you full benchmark tests when we get a review unit, but for now we’ll talk about our experience of using the SlateBook during our hands-on, and the tech specs of the device.

The SlateBook’s 10-point capacitive touchscreen is a full HD BrightView WLED-backlit display with a resolution of 1920 x 1080. We found it to be crisp and clear, though we were in a room with very low light during our hands-on so we’ll need to try it out in a normal office environment to truly see how good the display is.

The processor inside the HP SlateBook is a NVIDIA Tegra 4, which HP says is “perfect fro running games and apps from the Google Play Store.” It’s a quad-core CPU and is coupled with 2GB RAM. It only has 32GB built-in storage, but there is a microSD card reader for the ability to add more storage.

We found the SlateBook to be smooth and responsive, though we did find that waking the SlateBook up from sleep after a few minutes of disuse took an absurdly long time. So much so that we thought we had broken it and considered running away and hiding before anyone noticed.

When we asked a HP representative why the SlateBook wasn’t waking up, she didn’t seem too surprised and suggested we wait a few minutes more. We did, and eventually after a ridiculously long wait it sprang back to life. Whether it was just a fault with the particular unit we were using or something that’s going to plague every unit is something we’ll have to find out when we get our hands on our review sample.

The SlateBook also has a front-facing TrueVision HD Webcam with an integrated digital microphone for making video calls.

When it comes to connectivity, the HP SlateBook offers 802.11b/g/n WiFi and Bluetooth 4.0, as well as a HDMI slot, a 3.5mm audio jack, two USB 2.0 ports and one USB 3.0 port, as well as the aforementioned microSD card reader.

Beats Audio is integrated into the SlateBook too (it may well be one of the last HP laptops to get Beats Audio features, as HP’s license for the technology will end with 2014 due to Apple’s acquisition of the company).

We haven’t tested the battery life of the HP SlateBook yet, but HP says it’ll last for up to nine hours.

Now for arguably the most important aspect of the HP SlateBook: the software.

This isn’t the first time we’ve seen Android running on a laptop, but previous devices we’ve seen have been hybrid or convertible laptop/tablets, or have had Windows running on them too like Samsung’s Ativ Q.

HP’s vice president Mike Nash has said: “The SlateBook is in a very new category. Customers told us they spend a lot of time on mobile applications,” adding that he received many questions like “why can’t I access the Android ecosystem from the clamshell form factor?”

So the SlateBook aims to address the needs of such customers. HP has adapted Android for the 14in screen, stretching apps out to fill the whole display.

While there’s access to the Google Play Store and all of the features that come with Android, you won’t be able to run any Windows desktop apps on the HP SlateBook, so it’s not going to be an ideal laptop for everyone, that’s for sure.

What’s odd is that the SlateBook is effectively a rival to Chromebooks, including HP’s own Chromebook 14, which actually costs £60 less than the SlateBook. They’re both laptops aimed at customers who do most of their computing on the internet, and they come with very similar specs.

There are differences between the two devices, aside from the operating system they run. Nash says that using a browser on the SlateBook isn’t as good as on Chromebooks, but Android is already used by millions of people and some want to see it on their laptop.

He also points out that the SlateBook can run some apps that the Chromebook can’t, including Skype. Printer support is apparently better on Android than Chrome OS, too.

So what’s it like using Android on a laptop? Honestly, it’s a bit weird. It doesn’t seem particularly intuitive and all of the icons and navigation seemed small and fiddly. We’re looking forward to spending more time with the SlateBook to see if it’s something we could get used to, but the jury is still out at the moment on this one.

The HP SlateBook is set to be released on 6 August, and will cost £329 inc VAT. As mentioned above, that’s more expensive than most Chromebooks and is also more expensive than many Android tablets, though Samsung’s Galaxy Tab S 10.5 is £399, as is Sony’s Xperia Z2 Tablet.

There are plenty of Windows laptops that’ll cost you more than the HP SlateBook, but they’ve probably got much more impressive specs and will offer you more versatility and power.