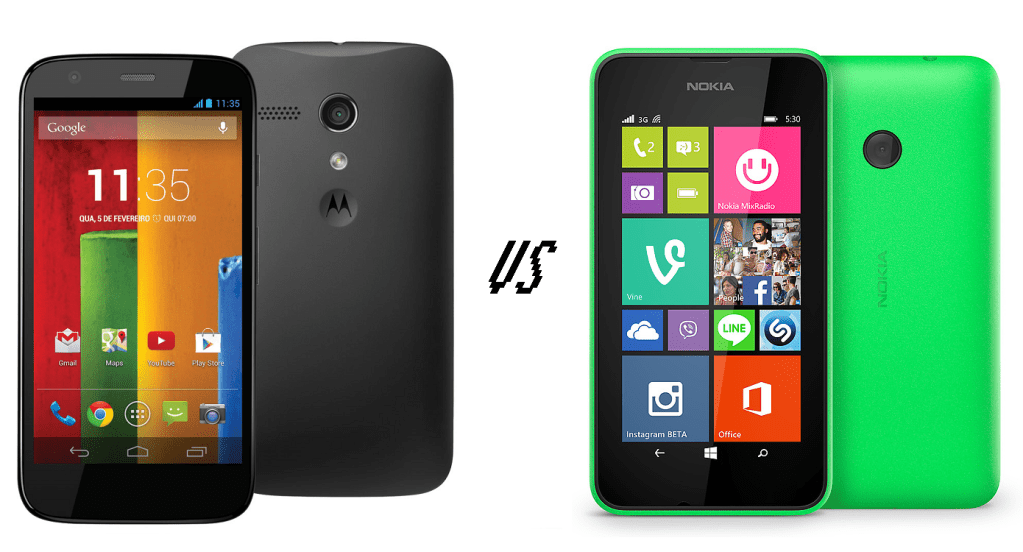 Despite being cheaper we don’t think the Nokia Lumia 530 has what it takes to knock the Motorola Moto G from its budget smartphone throne. It has a lower hardware specs across the board and even though Windows Phone 8.1 includes many improvements, Android is still superior.

We haven’t seen the Lumia 530 in the flesh yet – it will be released in August – so we’re comparing specs here to give you an idea of how the two budget smartphones compare.

Now the Moto G is available in two versions you can pick it up for around £110 for the original model and £139 for the newer one which has added 4G LTE support and a microSD cards slot.

The Nokia Lumia 530 is available to pre-order for just £90 so is cheaper and matched the price of the Motorola Moto E. It comes in different versions but this only dictates whether it’s dual-SIM or not.

These two ultra-cheap smartphones have a similar design in that they are both relatively small and have a pebble-like shape with curved rear covers. They also share the ability to change colour quickly by way of interchangeable covers.

With a smaller screen it’s the Lumia 530 which is the more compact and unsurprisingly lighter.

As we just mentioned, the Lumia 530 has a smaller screen than its rival here. It’s 4in matching the most recent iPhone models while the Moto G’s is half an inch bigger at 4.5in. Both use LCD technology but the Moto G has an IPS panel.

On the memory side of things, the Moto G has twice that of the Lumia 530 at 1GB of RAM.

You can get the Moto G in either 8- or 16GB capacities which is at the worth twice that of the Lumia 530 which has just 4GB. This different is negated somewhat since both devices have a microSD card slot on-board which can accept up to 128GB.

Like the Moto E, you’ll just get a rear facing camera on the Lumia 530 so taking selfies will be a little tricky. However, the Moto G has both rear and front facing cameras on offer – you can take selfies with the 1.3Mp shooter.

Things are tied for the main camera as both have a 5Mp resolution snapper with an LED flash only found on the Moto G.

The Lumia 530 wins a point for having a removable battery but it’s just 5.4Wh compared to the 7.9Wh cell found inside the Moto G.

While the Moto G consistently has better hardware on offer than the Lumia 530, software is possibly a bigger deal when comparing the two smartphones. One runs Android while the other has Window Phone 8.1.

There’s too much to compare right here right now but the Moto G is your Android representative with version 4.4 KitKat. It’s essentially the stock version of Android which you’ll find on Google’s Nexus devices but with a few additional Motorola apps thrown into the mix – we like it.

In the other corner is the Lumia 530 which is the cheapest way of getting your hands on Windows Phone 8.1, Microsoft’s rival to Android and iOS. The 8.1 version is the best yet and adds key features like the Action Center which provides proper notifications and quick settings. There are other improvements too like a better Start Screen and the WordFlow keyboard which supports swipe gesture typing.

However, Cortana – Microsoft’s version of Siri – is yet to launch in the UK and we still think that Windows Phone is still playing catch-up to Android (and iOS) on the app front.