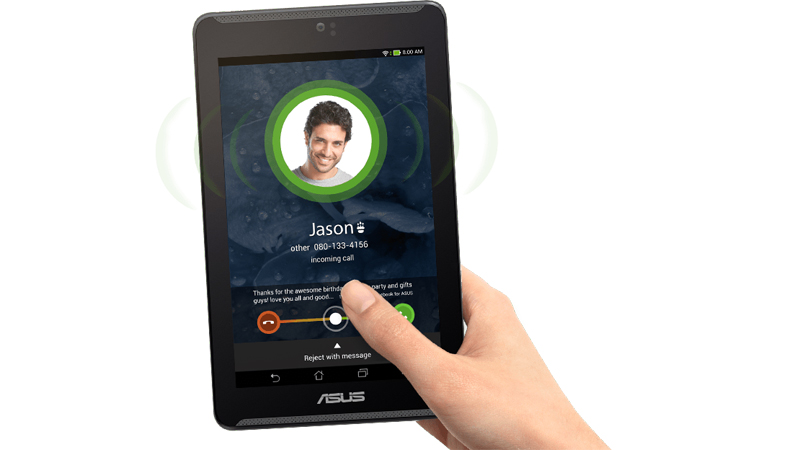 It’s tricky to give the Asus Fonepad 7 LTE a solid verdict, because it’s a device we think will appeal to only a few. For anyone looking for a 7in tablet that can make phone calls, the Asus Fonepad 7 LTE is certainly worth a look, though we’re not completely sure why you’d want to make phone calls on a 7in tablet. If you’re just looking for a 7in tablet, you’ll find better elsewhere. We really liked Asus’s £120 Memo Pad 7, and we also love the Nexus 7. Pair the Memo Pad 7 with the £135 Motorola Moto G (which we gave a Recommended award and named ‘the best budget smartphone ever) and you’re looking at £255 for a brilliant 7in tablet and a brilliant smartphone.

The Asus Fonepad 7 LTE is certainly qualifies a ‘phablet’. It’s a 7in tablet that, you’ve guessed it, also acts as a phone. It’s not to everyone’s taste, but it does its job well. Here, we review the Asus Fonepad 7 LTE. See also: The 25 best tablets

The Asus Fonepad 7 LTE is for consumers that want to own both a smartphone and a tablet, but can’t afford both. It’s also for anyone who’s been wishing for the ability to make a phone call from their tablet. We think that’s a pretty niche market, but if you fall into it then the Asus Fonepad 7 LTE could be exactly what you’ve been looking for.

Starting at £199, it does seem a little overpriced, particularly compared with Asus’s own impressive £120 Asus MemoPad 7 which we recently reviewed. However, that model does lack the SIM-card slot so there’s no 3G/4G connectivity or ability to make phone calls and send texts.

That’s the same price as the Nexus 7, though, which is top of the PC Advisor tablet chart for 2014 right now, and is much less than the high-end 7in tablets from the likes of Apple and Samsung. Here, we’ll be finding out how the Asus Fonepad 7 LTE compares with its rivals and the other new tablets that Asus offers.

It’s important not to confuse the Fonepad 7 with Asus’s Padfone. The Padfone is a smartphone that slots into a tablet docking station, while the Fonepad is a tablet with a SIM card slot and the ability to make phone calls.

The Asus FonePad 7 LTE comes in just black or white, unlike the Memo Pad 7, which comes in several bright colours. We tested the black unit of the Fonepad, which has a slightly sparkly, textured finish on its plastic back. Unfortunately, rather than adding a bit of glamour to the tablet, we think it looks cheap and quite tacky.

According to Asus, the Fonepad’s display has an anti-fingerprint coating, but during our testing we found that smudges and fingerprints showed up on the reflective screen more than we’d normally see on a tablet.

Aside from those qualms, we found the overall design and build of the Asus Fonepad 7 LTE to be solid and reasonably attractive, though the bezels around the display are a little thick for our liking.

Dust and dirt tended to get stuck in the uncovered MicroSD slot and MicroUSB port, too.

It also feels heavy, at 333g compared with the 295g of the Memo Pad 7, though that’s only two grams heavier than the larger 7.9in iPad mini.

We found the Fonepad 7 easy to hold in both portrait and landscape orientations, but it did begin to feel heavy after prolonged periods of time – watching a film on the train home or browsing the web for several minutes, for example.

Additionally, if you’re planning on using the Fonepad 7 to make phone calls without using the speakerphone functionality or plugging in headphones, you’ve got to hold that huge device up to your ear. Not only does it look very silly, it’s also extremely uncomfortable, especially if you’re a bit of a chatterbox – a Bluetooth headset or headphones with a built-in mic will be a good investment.

The Asus Fonepad 7 LTE has a 7in HD display with a 1280 x 800 resolution IPS panel, making a 216ppi pixel density just like its Memo Pad 7 sibling. It’s a bit disappointing when you compared that with the Nexus 7’s 323ppi display, and even the Tesco Hudl’s 243ppi. However, we found the screen to be bright enough and crisp enough to comfortably enjoy watching movies, browsing the web and viewing photographs. You’ll only really notice the lower pixel density if you’re already used to using a much higher resolution display on your smartphone or tablet.

Inside the Asus Fonepad is a 2×2 Intel Atom Multi-core Z2560 processor clocked at 1.6GHz, and paired with 1GB of RAM. That’s not quite as impressive as the MemoPad 7’s Quad-core 1.86GHz 64-bit processor, but it’s still pretty good for a tablet of this price.

We still found that the Fonepad 7 LTE coped with most tasks we threw at it, launching apps quickly on most occasions, even the Camera app.

In our benchmark testing, we found that the Asus Fonepad 7 LTE scored 1062 in our GeekBench 3 test, 12.2fps in the T-Rex GFX graphics test and 1011 in the Sunspider browser test. That’s much less impressive than the Nexus 7 (which was actually made by Asus, too), which scores 1832 in GeekBench 3 thanks to its quad-core Qualcomm Snapdragon processor, and 16fps in the graphics test meaning smoother graphics performance.

You’ll get the option of either 8GB or 16GB internal memory, but it’s not a decision you’ll need to take too seriously, as there’s a microSD slot for adding up to an extra 64GB storage if you need it. The Nexus 7 doesn’t have the option of adding storage via microSD, so this is a real selling point for the Fonepad 7 LTE.

Plus, you’ll get 5GB lifetime Asus Web Storage space for storing photos, videos and other files in the cloud, with an additional 11GB for the first year.

The Fonepad 7 LTE has 802.11a/b/g/n WiFi and Bluetooth 4.0, as well as 3G and 4G LTE connectivity if your contract supports it. There’s no NFC, though or other premium features like an IR blaster.

Dual front-facing speakers on the Asus Fonepad 7 LTE are a real boon, meaning better sound than most tablets, which tend to have a lone speaker situated on the back instead. It’ll mean a better experience while watching movies, for example, and is ideal for taking or making calls over loudspeaker.

The Asus Fonepad 7 LTE has rear- and front-facing cameras. The rear-facing camera is 5Mp like the Memo Pad 7 and iPad mini, and produces surprisingly reasonable results. We really like Asus’s camera app, which offers filters and effects as well as cool features like Smart Remove for getting rid of unwanted objects from a photo and Depth of Field for some cool (albeit hit-and-miss) Macro-style photos.

You can see some examples of the photos we captured using the Fonepad 7 LTE below. Click images to enlarge.

Above: A full-size crop of the photograph above, showing lack of detail on bricks and bushes.

Above: Mandatory cat photo and an example of the Depth of Field feature in action (that’s my keyboard in the background).

It felt clumsy and awkward taking photographs with the tablet, though, so we wouldn’t recommend using it as your main camera while out and about.

The Fonepad is capable of capturing video at 1080p, and we were really pleased with the videos we captured using the device. On the front of the Fonepad 7 LTE is a 1.2Mp camera, ideal for video calls, with 720p video recording.

We’re pleased to see that Asus has given the Fonepad 7 LTE an Android 4.4 KitKat update complete with the new Asus ZenUI that we loved on the Memo Pad 7.

ZenUI offers a flat, simple and colourful interface with easy-to-understand icons and nicely designed apps. We particularly like the What’s Next and Do It Later apps that Asus provides.

What’s Next helps you to manage your schedule by merging events, meetings, birthdays and more into one handy and helpful app, while Do It Later allows you to collect together all of your to-do tasks into one place.

We were quite impressed by the battery life of the Fonepad 7 LTE during our testing. Asus says that it’ll last for 11.5 hours of constant use, or 735 hours in standby.

We used the Fonepad 7 LTE for four days before needing to charge it. We used it to take photographs, record video, browse the web, make phone calls and run apps. It’s got a 15Wh, non-removable battery.

There’s also the Power Saver app to help conserve battery life even more, providing ‘Smart Saving’ options that you can customise to suit your preferences.