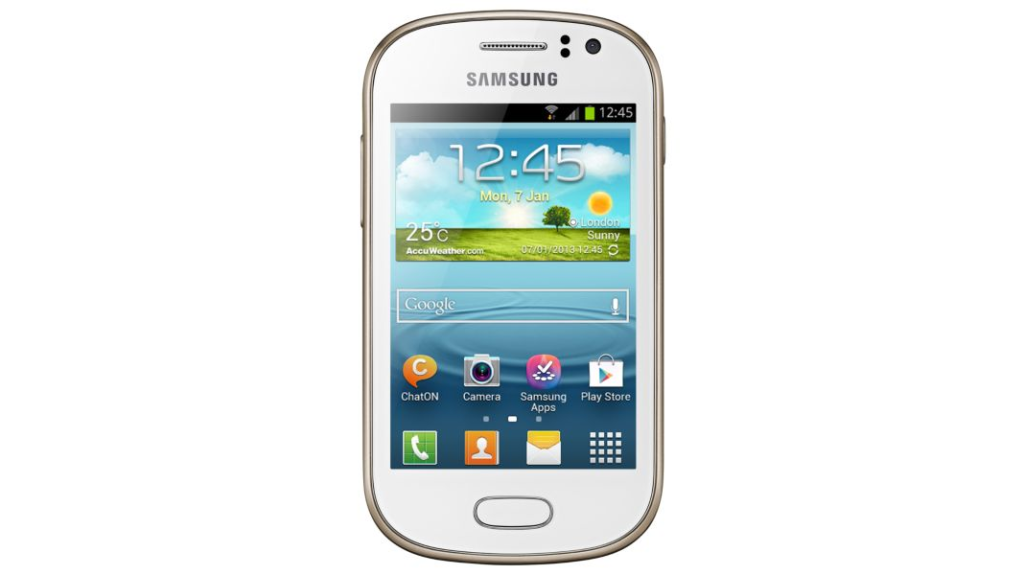 There’s nothing wrong with a cheap, functional smartphone, and the Galaxy Fame is exactly that. The trouble is that even at this price the Fame is being squeezed out by much better phones that cost roughly the same amount. Windows-toting Lumia 520 is a much better performer at a similar size, and the Moto’s E and -G knock the Fame for six. It’s not a bad deal, but for just a tiny bit more there are better deals to be had.

The Galaxy Fame is a budget Android phone from Samsung. It has an SRP of £145, but it’s been around for a while and can be purchased for around £50 from online retailers. (See all budget smartphone reviews.)

That’s cheap, but is the Galaxy Fame good value in a world in which you can purchase the  Moto E and  Lumia 520 for less than £100? Let’s find out. (See all Android phone reviews.) Our review sample was provided by GSM Nation.

Samsung makes good handsets, and you’ll rarely found one that is poorly put together. The Galaxy Fame is no exception. It’s small and smooth like a big flat pebble. The edges are curved and rounded, the colours on our test model a muted blue/black with silvery trim. There’s a more obviously Samsung white and silver model, too.

It feels well built and although no-one would mistake it for a flagship smartphone it doesn’t look cheap, in a bad way.

The Galaxy Fame measures 113x61x11mm and weighs 120g. It’s pretty chunky for a small handset, but not at all too heavy. It’ll slip into even the smallest pocket and it’s also pretty easy to use one handed. (For more, see best Android phones.)

The Galaxy Fame is small, then. And that’s because it is built around a small display. It’s a 3.5in touchscreen display with a native resolution of 320×480. That gives it a pixel-density of 165. That’s not anything like as good as you would expect from a high-end smartphone, but it’s not dreadful.

It’s not a great screen. Next to the current crop of 5in mega-displays the Galaxy Fame’s display look’s blurry and washed out. Viewing angles are really poor.

The size and resolution is a problem when navigating Android, too. It’s difficult to accurately use the onscreen keyboard so cramped is the space. With such a resolution you can’t fit much of a website on the screen at once, either.

Ultimately you get what you pay for when purchasing a smartphone display, and the Galaxy Fame is no exception here either. It’s just a shame that it cannot compete with those of excellent budget phones such as the Lumia 520 and Moto G. The Moto G comes with a nicely sized 4.5in display which has a 720p resolution, for instance. That means a pixel density of 326ppi.

There is simply no comparison, and the Moto G can be purchased for around £130. Drop to to the around £60 it would cost to pick up the Lumia 520 and you still get a 4in panel that has a resolution rated at 800×480-pixel. This equates to a pixel density of 235ppi. The Galaxy Fame can’t compete in this respect. (See also best smartphones of 2014.)

Again we are in the bargain basement here. You get a single core processor running at 1GHz, paired with just 512MB of RAM. It can cope with everyday tasks, but only just. This is not a fast phone, something that is borne out by the benchmark results.

Geekbench measures general use, and if we found the Galaxy Fame sluggish it agreed with scores of 197 single core / 208 multi core.

The Galaxy Fame is a dog for gaming, too. We couldn’t get it to run processor-intensive games, and again the benchmarks backed up our experience. We couldn’t get the GFBenchmark T-Rex framerate benchmark to run, at all. And that’s not a good result.

And in measuring the laggy Javascript performance on the Galaxy Fame’s Android browser we used the SunSpider Javascript benchmark. This turned out a respectable if far from fast 2,032ms.

Let’s be fair: no-one expects top performance from a budget phone. But again, you can purchase vastly better smartphone performance for just a little more. (To put it in context, the Moto E – available for less than £100 – has a GeekBench scroe of 608 (multi-core) and 1877ms in SunSpider. More importantly in terms of graphics the Moto E surprised us with 11fps in the T-Rex GFXBench test. Again, you get what you pay for in terms of performance. But there are better options around. Check it out: The 6 best budget smartphones: what’s the best budget smartphone?

Again, not great news I am afraid. The 1,300mA battery is a relatively small capacity these days. We got a day’s use out of it without charging, but only light use, and only just.

The Galaxy Fame has a 5-megapixel camera. It’s okay, but no better than that. Shots are a little weak and drab, with occasional noise. It works reasonably well in low-light conditions, however.

Here are some test shots. Click each image to view at full size:

Video is a bit of a dead loss, however. Blurry and lacking focus. Here’s a test clip:

If you never used Android before rest assured that a recent version of Android such as this is great to use. Full featured, stable, easy to use and good to look at. If you avoid dodgy third-party apps sites you should be secure too. Of course Android is in essence one huge data-gathering exercise on Google’s behalf but, hey, it’s Google’s world – we just live in it. (See also Group test: What’s the best smartphone?)