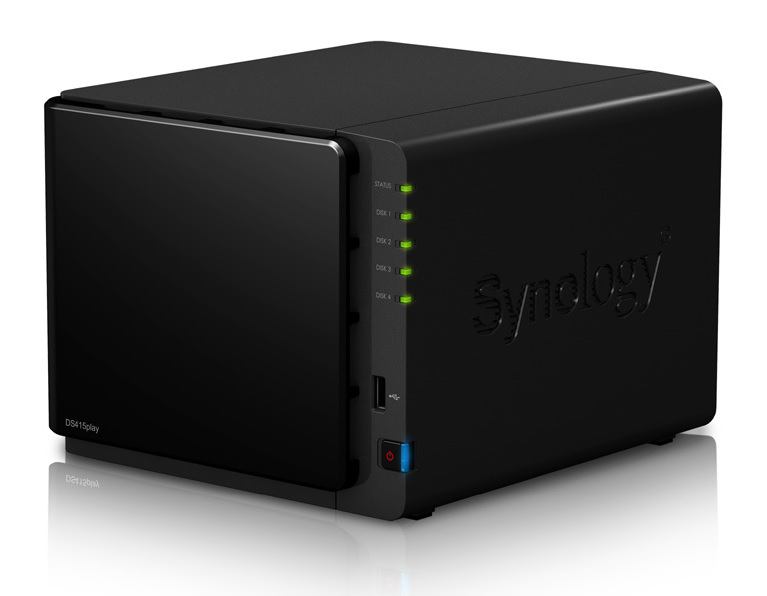 Synology’s RRP for the DS415play is £372 and at that price or the inevitably lower real shop prices the company should have a winner on its hands. The competing QNAP TS-469L is faster and has better specifications but is over £100 more expensive. When you combine the performance, price and the siren-like draw of DSM 5.0 this could be a crowd pleaser for the multimedia NAS market. 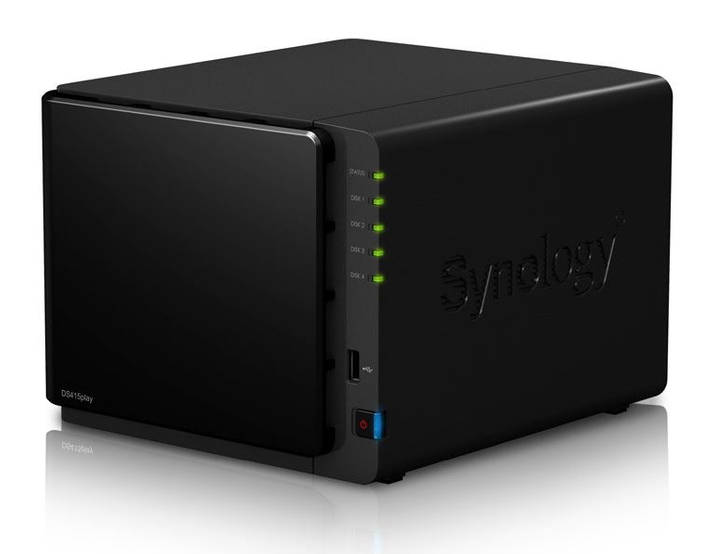 This is the new DS415play netword-attached storage ( NAS drive) unit from Synology. The Play series is designed to fill a gap in the Synology lineup, to cater for home users.

For a NAS drive aimed at home users it has some useful specifications, starting with an Intel Atom dual-core CPU running at 1.6 GHz and backed up by 1 GB of DDR3 memory. This is a considerable step-up if you have been using one of the company’s budget J-series units.

It includes a hardware transcoding engine for 1080p video for streaming video to your TV or mobile device. However, it is worth pointing out that despite the media focus of this device it is a streaming device only as there is no HDMI port for direct connection to a TV, as you find on more expensive units such as the QNAP TS-469L or Thecus N4560. However, a great addition for Mac users is native support for external HFS+ formatted drives. (See also: Best NAS drives.)

The unit itself is a discrete affair in brushed black plastic with a shiny black front panel. The front does not hinge like some models, but is held on by rubber-gripped pegs and can be simply pulled off. Inside we find tool-less drive bays which are a boon for those intimidated by screwdrivers – you just unclip the bay put your drive in and slide the bay into the unit. The disks are hot swappable, so can be removed with the unit still powered on.

As with all Synology DSM-based units, setting up and using is a pleasure. This is one area Synology plays its trump card, the software interface. The DSM 5.0 operating system has an attractive interface we found intuitive, one that really feels like a personal-computer operating system.

The iOS and Android apps add more control. There’s the DS Video app which allows you to watch videos from your NAS, DS Download to download files and torrents, and DS Photo for browsing the NAS or for backing up photos from your mobile. These apps can reach your NAS at home with the help of Synology’s free DDNS service, so you don’t have to worry about your ISP randomly assigning your home connection a new IP address.

To test this unit we really went to town to get a well rounded view of performance. We installed two Seagate 4 TB Enterprise Capacity and two 3 TB Enterprise Value disks. We used CrystalDiskMark (CDM), ATTO and file copy on Windows 7; and QuickBench and Blackmagic Disk Speed Test on OS X Mavericks (SMB share). All tests were run over gigabit ethernet, using an Apple Time Capsule as router.

These are respectable scores for this benchmark and considerably higher than the 413j we tested last year.

To get some real-world performance numbers we also copied a 3.47 GB video file from and back to the NAS and timed the copy. The copy from the NAS to a laptop (which contained a Samsung EVO 750 GB SSD) completed in 35.6 seconds, which equates to a read speed of 100 MB/s. The copy from the laptop to the NAS was completed in 48.7 seconds, suggesting an average speed of 73 MB/s write.

For those who are concerned with 4 kB file size performance, under CDM the DS415play achieved 0.838 MB/s read and 5.19 MB/s write. These 4 kB numbers are about what you could expect from a HDD-based RAID solution.

On OS X we used the QuickBench extended test which consists of transfers from 20 MB to 100 MB; and here the NAS averaged 104 MB/s read and 88 MB/s write which are good scores. Finally we ran BlackMagic which returned average write speeds of 83 MB/s and reads of 93 MB/s.