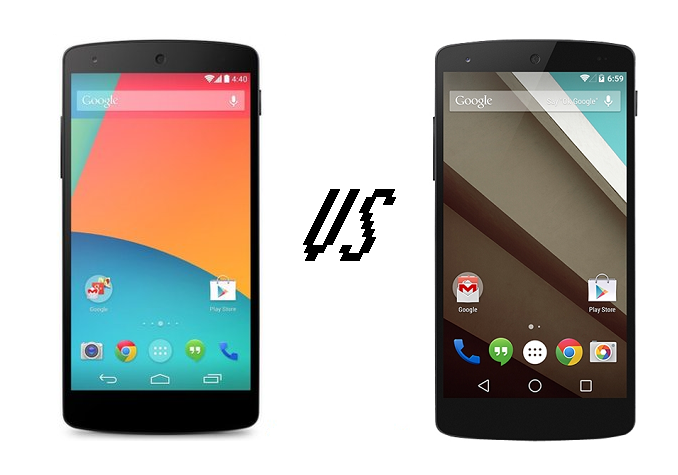 Android L is an exciting new version of Google’s operating system will a radical redesign. It looks and feels great, automatically making KitKat seem dated. Performance improvements and other new features are a bonus and we expect there to be plenty more when Android L is released later this year.

Android L was announced at Google I/O 2014 last month and the developer preview was released the following day. We’ve installed it on our Nexus 5 in order to compare it with the previous version of Android, KitKat.

We’ve compared the stock editions of Android so be aware that even though you may have a device running on KiKat, it could look very different due to a manufacturer’s own user interface overlay or skin. See also: Android L vs iOS 8 comparison preview.

Although it’s simply known as Android L, the new Android will arrive this autumn – by which point Google may have given it a name following the alphabetical list of sweet treats. Lollipop is the favourite but maybe Google hasn’t announced the name yet because it’s working on another partnership following KitKat with Nestle. Maybe the next version will be called Lucky Charms. Anyway, Google is likely to announce a Nexus device to launch Android L on – probably a Nexus 8.

KitKat is, of course, already available but that doesn’t mean your phone or tablet is running it. It’s one of the downsides of Android. If you have got version 4.4 KitKat then there’s a good chance you’ll get Android L but it’s no guarantee and when the upgrade will arrive depends on many things.

We’ll have more details on this later in the year but if you have a Nexus 5 or Nexus 7 you can download the developer preview of Android L now. See How to install Android L now.

Android L represents the biggest design change for the mobile operating system in a long time – probably since version 4.0 Ice Cream Sandwich. Going by the number that doesn’t seem like long ago but it launched in 2011.

Google has introduced a new ‘Material Design’ look for Android, which has also been offered to developers for use in their Android apps. Android L brings more depth to the operating system’s appearance using shadows, light and also automatically generates touches of colour based on the content being displayed. There are also plenty of new animations making the OS feel different.

There are many design changes, a lot of which will be obvious as soon as you see the interface. Check out Google’s video for Material Design below and see what Android L looks like in the screenshots compared to KitKat – all taken from the Nexus 5.

KitKat is on the left and Android L is on the right – the dialler and contacts list are great examples of what Material Design looks like compared to the old KitKat interface.

The lockscreen is the first thing you see when you switch on your device and it looks pretty different in Android L with the addition of notifications. You swipe up to unlock, left to launch the camera and right to open the dialler. The latter is a new feature.

There’s little change on the homescreen, although Android L will come with new icons when it is released. The main thing to note is the style change for the navigations buttons which are now a triangle, circle and square for back, home and recent apps.

Recent apps has had something of an overhaul. The 2D list of open apps has been replaced with a 3D rotary style view which makes the old one look extremely dated. Each app has a card and can be swiped off to the side to close it as normal but also tap the ‘X’. A new feature here is that apps like Chrome will have individual cards for each open tab (not working in the developer preview).

The drop down notification bar has also had a complete redesign with a different layout as well as the Material Design style. You swipe down from the top of the screen as per usual but instead of tapping a button, you swipe a second time to access quick settings – which now includes a screen brightness slider, notifications (including do not disturb), and cast screen.

On the Nexus 7 is depended where you swiped down as to which drop down bar you got, but with Android L it’s the two swipe method. The cog icon will still take you to the main settings menu and the user profile is now a more subtle circle in the corner rather than an entire tile.

As we’ve already shown, on the lockscreen and notification bar, notifications look quite different on Android L. As well as a new look and getting them in new places, they will be ordered by priority (something which Android L will learn more over time) rather than chronologically. You can swipe them away to the side as per usual but also double tap to open the associated app.

So design is a massive change in Android L but there are other things too. Google has switched from the Dalvik to ART (Android runtime) which the firm says is up to twice as fast. This is present in the developer preview and although Android L is very smooth on the Nexus 5, it wasn’t as if KitKat was exactly slow. We found nothing to get excited about in benchmarks. We doubt the average user will notice any difference but things could change by the time Android L is released.

The other big performance upgrade is support for 64-bit processors. We don’t have any 64-bit Android devices yet but they will arrive later this year, probably soon after or with Android L and this will boost performance.

A more tangible performance upgrade which we’re already experiencing is improvements on battery life. Something called Project Volta allows developers to identify where their apps are draining battery power so they can make improvements.

On top of this a new battery saver mode promises to add 90 minutes battery life to the Nexus 5, so it will be a similar story for most smartphones. In fact, the Nexus 5 has been tested with Android L and showed an improvement of more than 120 minutes which is very impressive.

A new feature which has been announced for Android L is location and proximity based levels of security. Not present in the developer preview, it will enable users to unlock their smartphone or tablet without entering a PIN, pattern lock or similar, but only when they are close enough to a device like an Android Wear smartwatch or in a location like their own home.