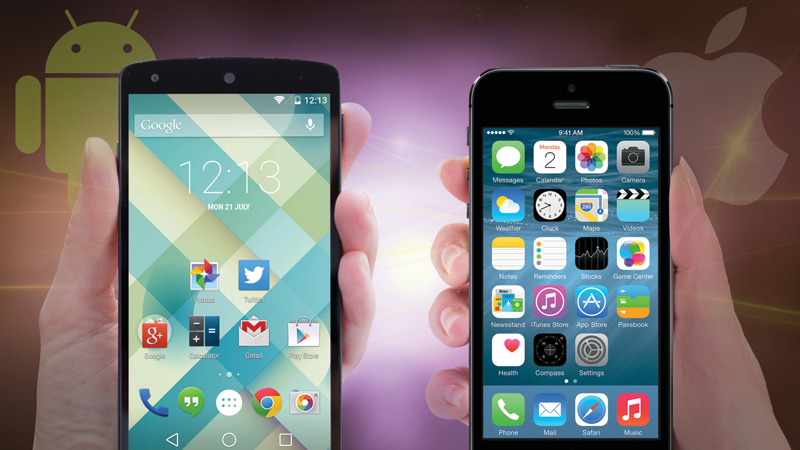 Overall, it’s clear that Apple and Google are getting more competitive than ever. Both Android L and iOS 8 introduce features that have been sought after for years, particularly Apple’s more open attitude. Both Apple and Google can be accused of borrowing features from one another for these updates, each hand-picking the best elements from their rivals to improve their own offering. We’d like to see Google’s battery saving features come to iOS in the future, and Apple’s new Handoff features make their way to Android but it really is a case of personal preference when determining which operating system is best. The closer they get in terms of features, the more difficult it is to fight for one or the other.

Apple and Google have both recently unveiled their upcoming mobile operating system updates, with Apple’s final iOS 8 due to be unveiled today on the iPhone 6, while Android L will be released later this autumn. Google’s offering is Android L, while Apple’s is iOS 8. Here, we compare the two in our Android L vs iOS 8 comparison preview, to determine what’s in store for iPhones, iPads, Android smartphones and Android tablets later this year. See also: Android Lollipop new features

Android and iOS are actually getting closer than ever, so there are many similarities to discuss in addition to the differences between the two rival operating systems. Read on to find out more about how they compare.

You’ll have to pay to join Apple’s developer program if you want to start using iOS 8 (it’s £60 per year) but you can get your hands on Android L for free. Here’s how.

The design of iOS 8 is mostly unchanged from the design of iOS 7, which is no surprise as it was iOS 7 that brought the major design changes. iOS 8 has that ‘flat’ design, ditching all signs of skeuomorphism in favour of minimalist aesthetics.

This year, it’s Android’s turn for a bit of a design change. Google has introduced a new ‘Material Design’ look for Android, which has also been offered to developers for use in their Android apps. Android L brings more depth to the operating system’s appearance using shadows, and also automatically generates touches of colour based on the content being displayed.

Above: The dialler in Android L is a good example of the new design. It uses circles instead of squares, and is brighter and lighter overall. The icons along the bottom have been tweaked too.

Additionally, there are new animations and touch feedback, so the overall look and feel of the operating system is smooth and responsive.

When it comes to new features, both Android L and iOS 8 have many. We’ll go through some of them here, and discuss how they compare to one another.

In Android L, you’ll find new, enhanced notifications. You’ll be able to get them on your lock screen, and they’ll be automatically ordered in priority. You can swipe them away if you want to dismiss them, or double tap to open the relevant app.

Similarly, notifications have improved in iOS 8. They’re now interactive, so you’ll be able to reply to text messages, accept calendar invitations, snooze reminders and even Like Facebook statuses you’re tagged in without even having to leave the app you’re in. You can already swipe them to automatically go to the relevant app, but you can’t swipe to dismiss them.

We’d say iOS 8 when it comes to its new notification features, and we’re particularly excited about the new interactive capabilities they’ll offer.

As mentioned briefly above, Android L brings a new lockscreen to devices. In addition to being able to see notifications, you’ll also be able to swipe up to unlock, swipe right to launch the dialler or swipe left to launch the camera.

In iOS 8, the lock screen is unchanged from iOS 7, offering notifications, slide right to unlock and slide up to access the camera. There’s no way to quickly access the dialler, though.

Multi-tasking in iOS 7 was already pretty good, but Apple has taken it a step further by adding recent and favourite contacts to the screen when you double click the home button to access the multi-tasking menu. These contacts appear in a swipable list along the top, to allow you to quickly and easily call, text or FaceTime call that person.

Android L brings multi-tasking to a new level for its users, too. Now, open apps will appear in cards in a carousel, which you can flow through by sliding up or down on the screen. To close an app, swipe the card to the left or right.

What’s cool, and something that iOS can’t do yet, is some apps will show multiple cards depending on how you’re using them. For example, if you’ve got multiple tabs open in Chrome, you’ll see each of them as an individual card on the multi-tasking screen.

Google has introduced a new personal unlocking feature that’ll enable users to unlock their smartphone or tablet without entering their passcode, but only when they are close enough to a device such as an Android Wear smartwatch.

Apple has its Touch ID fingerprint sensor, which is built-in to the home button of the iPhone 5S. In iOS 7, it was only able to unlock the device or be used instead of entering Apple ID details, but it’ll be opened up to third-party developers with iOS 8, so users will be able to use their fingerprint to access other apps such as banking applications, for example.

Both Android L’s and iOS 8’s new security features won’t be available to everybody, of course – if you don’t own an iPhone 5S or an Android Wear smartwatch, you won’t be able to use them.

We don’t yet know exactly how Android L and iOS 8 will affect the battery life of the devices they’re running on, but both let you identify how individual apps are using battery, and make improvements based on that information. Android L has an additional battery saving mode which iOS 8 doesn’t.

Google claims that the new battery saving mode coming with Android L will give the Nexus 5 90 minutes more battery life.

We’d like to see Apple introduce a similar feature, as iPhones are notorious for their poor battery life.

Both Google and Apple have added some new tools for developers that could mean exciting new abilities will arrive on Android and iOS devices soon. It’s particularly surprising that Apple has opened up iOS to developers a bit, as it’s a company that has always been known for its closed nature.

Apple has introduced what it calls Extensibility, which basically means that apps in iOS will be able to ‘talk to each other’ like never before. For example, using ‘Action extensions,’ Safari could gain a Bing translate feature, taking advantage of the Bing app’s capabilities. Or, Safari could gain a ‘Pin’ button for Pinterest users if the Pinterest app is installed. The possibilities here are endless, and extremely exciting for iOS users and developers.

Another element of Apple’s extensions is ‘Today extensions’ which are actually widgets that can be chosen to appear in the ‘Today’ view in iOS 8’s Notification Centre. Android has had home screen widgets for a long time, so Apple is bringing itself in line with its biggest rival with this feature.

Widgets and other extensions are much more restricted in iOS 8 compared with Android, though. Apple is keen to keep its operating system secure, and won’t allow developers to release apps that are just widgets, or just keyboards (yep, iOS 8 allows third-party keyboards for the first time).

Google has added new features in Android L for developers, such as direct links to apps from Google searches in the Chrome browser (something that has been available for a while, but only for select developers until now).

There are many more new features for developers in both Android L and iOS 8, but we’d argue that iOS 8’s changes in this area are more exciting, even if they are playing catch up in some cases. See also: 5 Android features you’re about to get on your iPhone

Apple used last year’s iOS 7 to introduce 64-bit compatibility to the operating system, and that continues with iOS 8.

For Google, however, Android L represents the first time the operating system has been compatible with 64-bit devices. We expect to see many more smartphones and tablets with 64-bit chips to emerge in the coming year following the announcement. This should mean speedier and smoother performance and a big power boost for Android devices.

Both Apple and Google have unveiled fitness and health tracking platforms for their upcoming operating system updates. Apple’s offering is called Healthkit, which works with the new Health app, while Google’s is called Google Fit for Android.

Both have similar purposes: they’ll help you keep an eye on your health and fitness data thanks to the sensors on your mobile or wearable devices, and also some input from you. Healthkit and Google Fit are platforms for developers to take advantage of, but Apple’s Health app is a bit like Passbook, pulling together data from other health and fitness apps into one, easy to access place.

There’s no doubt that Apple’s new ‘Hey, Siri’ trigger to activate the voice assistant hands-free is a feature borrowed from Android’s ‘Ok, Google’ activation for Google Now. However, this works only if the device is running on external power or if Siri is already open on screen.

Plus, also like Google Now, Spotlight in iOS 8 will let you search more than just what’s on your phone. It can search the App Store, iBooks Store, Wikipedia, Maps, iTunes and more, and it’ll bring up local movie showings, news trending among your friends etc.

Also new in iOS 8 is ‘Handoff,’ a feature that’s going to be a huge boon for anyone with multiple Apple devices. It’ll mean that, if you’ve been writing an email on your way home and have just arrived home, your Mac will automatically ask whether you’d like to pick up that email on OS X instead. It’s not just for emails, either. Most Apple apps that work across both OS X and iOS will work with Handoff. You’ll also be able to pick up calls on your Mac, and see all of your messages, even if they’re not iMessages.

Some of these features are available for Android, too, though third-party apps are required and it’s not quite as seamless or refined as Apple’s Handoff. If you own a Chromebook, though, Android L will automatically unlock your laptop when your smartphone or tablet is close by, and your notifications will appear on both your laptop and your mobile device.

With Android L, Google has introduced Android Auto, which is similar to Apple’s CarPlay feature unveiled alongside iOS 7 last year.

They are both very similar services, using your smartphone to offer you information and controls on your dashboard’s screen including maps, music and other apps.

Another factor to take into consideration when comparing these two upcoming updates is compatibility. iOS 8 will be able to run on the iPhone 4S or later, the iPad 2 or later and both generations of iPad mini.

Those with Android devices might have more trouble getting Android L straight away. If you own a flagship phone or tablet from Samsung, HTC, LG, Sony, Motorola or any other big name brand, you should get the update quite quickly. Those with Google’s Nexus 5 or Nexus 7 should get access to it immediately when it’s released to the public. HTC has said that HTC One M8 owners will get Android L within 90 days of its release, but we’ve not yet heard from other manufacturers. We’ll update this article when we find out more.