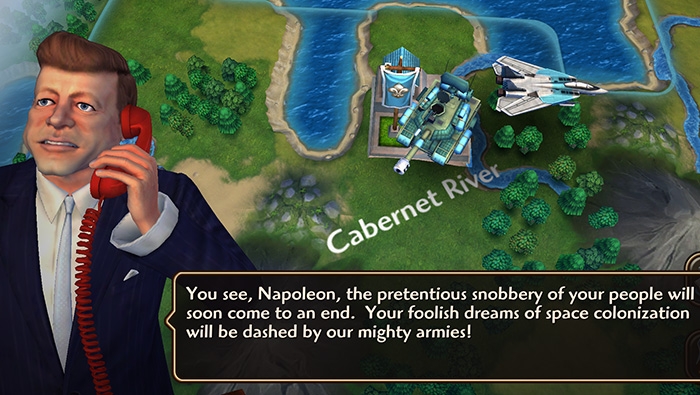 It’s really the same game as 2009’s Civilization Revolution 1, albeit with an extensive facelift. That’s not such a bad thing, given this is a smart and accessible rethink of an enduring formula, now updated for a more modern era of iOS gaming. High price or not, this deserves to be installed on a whole lot of iPads.

Less a true sequel and more a glossier version of the original, now carrying a massive price tag, this strategy game may make owners of the original Civilization Revolution a tad grumpy. If you haven’t previously dabbled with this streamlined, quicker, mobile interpretation of the long-running PC strategy series, however, you’re in for a treat.

Where your average game of Civilization tends to clock in at around a dozen hours, Civilization Revolution condenses your turn-based attempt to conquer the globe with might, science or culture into around an hour. You choose a Civilization to play as from the likes of Egypt, America and the Aztecs, found a few cities and decide whether you’re going to seize other Civ’s capitals, charm them into joining you or out-research them and win the space race.

Each approach is equally valid, and equally challenging, but you’ll need to adapt your tactics on the fly. It’s no good being a peaceful civ that’s expanding its borders with pure culture when you’ve got a load of angry tanks at your gates, for instance.

It dispenses with so many features -for instance, religion, most types of unit, customising the land around your cities – but manages to remain true to a successful formula that’s kept an awful lot of people busy and happy for almost 25 years. Purists are irked, inevitably, but this isn’t for them. This is about taking over the world in a lunch-break.

Where Civ Rev 2 differs from the now-five-year-old Civ Rev 1 on iOS is in the inclusion of 3D graphics, which basically turns it into the older Xbox 360 version of Civ Rev. It looks much nicer, although some of the leader’s faces look like someone mushed their fist into a ball of plasticine. Kennedy and Churchill are especially disturbing. A minor issue, though – the tiny cartoon fights better sword-wielding warriors, cutely chunky tanks and pocket-sized knights look great, happen quickly and offer plenty of scope for shock upsets.

The controls are little iffy, though they’re a big improvement on Civ Rev 1. Particularly, it’s tricky to obtain information about how strong an enemy is or exactly what constructing a new building will do before you commit to the fight or the expense. This is never enough to actually sour a game, but it does create the occasional accident. At least there’s a manual save feature, so some disasters can be rewound.

The £10 “premium” price is probably more of a stopping point. It is just about worth it, as this is an uncommonly slick and glossy iOS game,  designed to occupy you for hours – much like XCOM, from the same publisher – but it’s a great shame that the console version’s wonderful multiplayer mode is missing. It would have been a perfect fit for leisurely iPad grudge matches against chums, and it’s hard not to speculate that it’s simply been left out for cost reasons.

Let’s hope it turns up in a update further down the line. It really is needed, because the AI-controlled Civs aren’t the sharpest tools in the box. They’ll put up a reasonable challenge, but tend to focus only on military victories and don’t team up against you, which robs some of the strategy from CivRev 2.

Even so, this is an excellent and charming strategy game. It’s extremely hard to justify the purchase if you do already own Civ Rev 1 on iOS, as while the graphics may be prettier you’ll stop noticing quickly enough, and the addition of a couple of new leaders doesn’t really mix things up. It’s pretty darn close to Must Have if you’re a strategy lover who doesn’t have the first game, though.