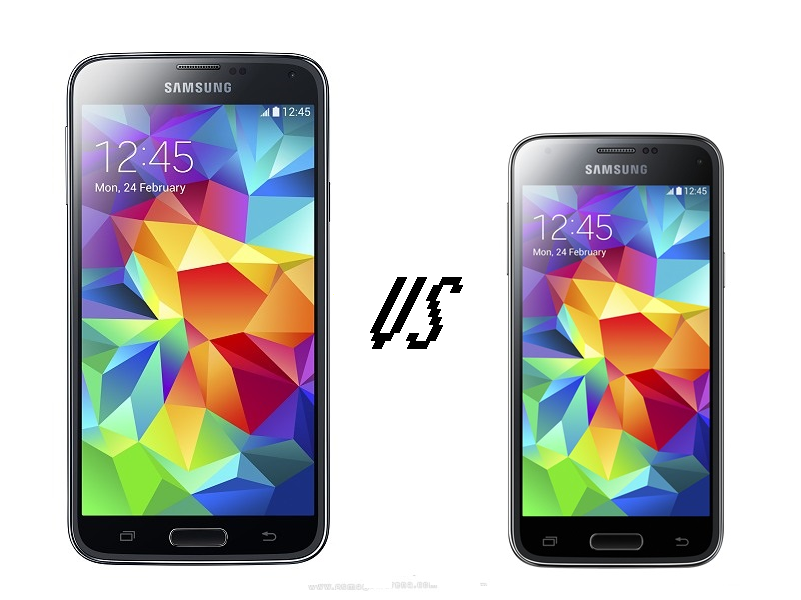 The Galaxy S5 mini has the usual downgrades compared to the full-size Galaxy S5 including screen resolution, camera and processor. It has the same design, including IP67 certification, in a more compact device while retaining the fingerprint scanner and heart rate monitor. We await a UK release date and price.

Following tradition, Samsung has announced a Galaxy S5 mini smartphone which is smaller and cheaper than the flagship Galaxy S5. Read our Samsung Galaxy S5 vs Galaxy S5 mini comparison review to find out what the difference is. See also: 33 best smartphones: The best phone you can buy in 2014.

Although Samsung has officially announced the Galaxy S5 mini, the firm is launching it first in Russia to be followed by a global release. This means we don’t yet know when it will arrive in the UK but it should be within a couple of months. For now we can speculate on price and compare the specs of the two Galaxy smartphones. Also see: Samsung Galaxy S5 mini review.

If you’re looking for a higher-spec version of the S5 there’s also the Galaxy S5 Prime, and for a rugged version check out the S5 Active.

The Galaxy S5 launched at a whopping £599 but was quickly available for less at around £550. Now the device has been around for a while you can pick it up for a fairly decent £450. There’s no UK price for the Galaxy S5 mini but it will be more affordable than its bigger brother. Somewhere around the £350 mark is out bet matching the HTC One mini 2 and Sony Xperia Z1 Compact.

Colour options are the same – black, white, gold and blue – and the plastic rear cover uses the ‘perforated’ effect (dimpled to you and me).

It may surprise you to learn that the Galaxy S5 mini retains the IP67 certification which the Galaxy S5 has. This means it is dust- and waterproof so can be fully submersed in water.

At 5.1in, the Galaxy S5 has a large screen so the 4.5in display on offer with the Galaxy S5 mini is a reasonable amount smaller – whether you can call it mini is up for debate but it follows the general trend of larger screens on smartphones.

In terms of resolution things drop from Full HD 1080p to HD 720p so pixel density also falls from 432ppi to 326ppi. However, both phones use Samsung’s Super AMOLED technology.

A downgrade in processor is inevitable and as such the Galaxy S5 mini has a 1.4GHz quad-core processor (Samsung hasn’t specified what chip it is) instead of 2.5GHz quad-core Snapdragon 801. It’s also got 1.5GB of RAM, down from 2GB.

There’s only one choice when it comes to storage on the Galaxy S5 mini and that’s 16GB. Technically there are 16- and 32GB available for the Galaxy S5 although you’ll mostly just see the lower capacity available at retailer and mobile networks.

Samsung continues to add a microSD card slot on its phones but the full-size Galaxy S5 can take a memory card twice the capacity of the mini version at 128GB.

Pretty much any smartphone will come with Wi-Fi, Bluetooth and GPS and the Galaxy S5 mini is no different – although it doesn’t offer 11ac Wi-Fi like the full-size Galaxy S5. However, it does come with NFC if you get the 4G LTE model and has the IR blaster.

On the photography front, the Galaxy S5 mini has an 8Mp rear facing camera. This is down from 16Mp on the Galaxy S5 and the mini can only shoot video at a maximum resolution of 1080p compared to 4K. Both feature auto focus, an LED flash and HDR. We’re not entirely sure yet but we fear features like Dual Shot, image stabilization, slow motion and simultaneous HD video and image recording might well be missing on the Galaxy S5 mini.

For all you selfie fans out there, the Galaxy S5 mini actually has a slightly higher resolution front facing camera than its bigger brother – 2.1Mp compared to 2Mp; No you won’t notice the difference and yes, they both record Full HD video.

As far as we can see, things are identical on the software side of things. Both the Galaxy S5 and Galaxy S5 mini run Android 4.4 KitKat with Samsung’s own TouchWiz user interface. The Galaxy S5 mini keeps software features like Ultra Power Saving, S Health, Private mode and Kids mode.

You can remove the battery on the Galaxy S5 and Galaxy S5 mini but as you would expect, the capacity on the mini is lower than the flagship smartphone. It’s rated at 8Wh (2100mAh) compared to 10.6Wh (2800mAh) but the lower specs such as screen resolution and processor clock speed should balance things out.