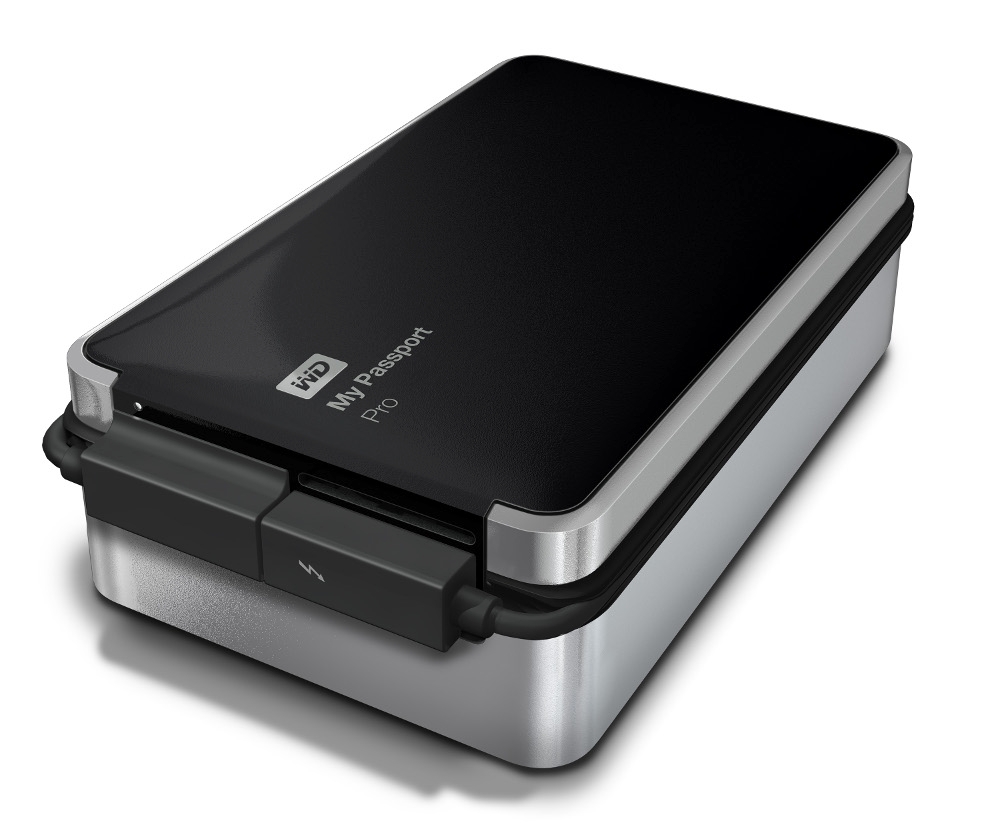 Thanks to an enormous capacity in a still just handleable bus-powered package drive chassis, the WD My Passport Pro could prove invaluable for carrying huge volumes of data on the road. At £350 for the 4 TB version it is not pocket-change cheap but nevertheless its price per capacity figure of just 8.8p/GB makes it in effect the cheapest Thunderbolt drive in this class. 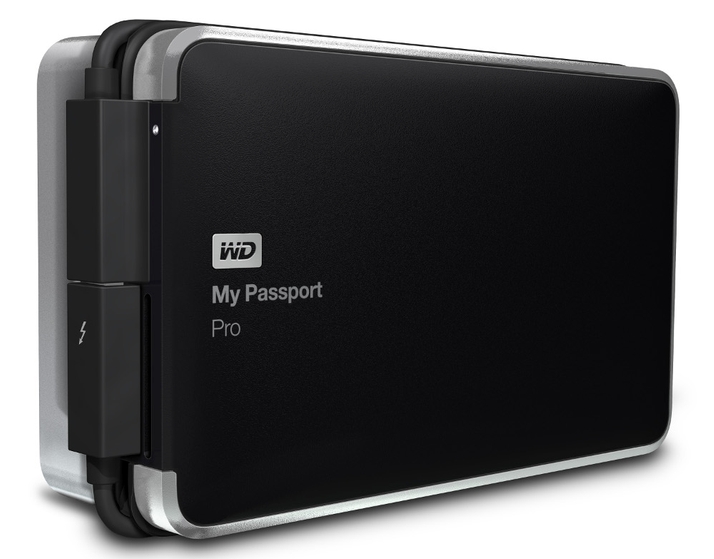 WD has been making various portable drives aimed at Mac users for many years now, but the My Passport Pro is the first to feature Thunderbolt.

The Passport Pro takes the same basic case as earlier metal-bodied My Passport models, but doubles the height in order to accomodate two hard disks inside. And these aren’t just regular 9.5 mm notebook drives, but chunky fat disks able to store up to 2 TB, each.

We tested the 4 TB version of this portable drive, using two 2 TB SATA disks inside. The beauty of the final packaged drive is that it can still be powered entirely from the Thunderbolt bus, so there’s no dependency on mains power or carrying fiddly adaptors.

But it is still something of a monster when viewed alongside the original single-disk drives. It weighs a hefty 717 g and stands 46 mm high on its dimpled rubber feet – this is no shirt-pocket accessory.

The two disks arrive ready configured into a RAID 0 striped array, to ensure fastest and most consistent speed right across the volume. The downside is of course the issue of data security, where one disk failing loses all your data, so full backups are more essential than ever. As with any software-based RAID device, you can reformat as a mirrored pair or just two independent disks.

Unlike many vendors though, WD does include a useful software utility with which to configure the RAID more easily, as well as run basic diagnostic tests. Unlike previous WD portable drives, there doesn’t seem to be any access to hardware-based encryption for the user through the WD application.

Build quality of the My Passport Pro is superb, a beautifully cast and milled block of natural aluminium alloy with a black anodised top section precisely inset into the casework. The Thunderbolt cable is uniquely integrated into the unit, and wraps around the case into a rubbery slot around its perimeter before clipping into place. It means you’ll never have to go hunting for a Thunderbolt cable, but you’re also limited by its relatively short

With two disks crammed into the case, potentially working at their maximum, plus Thunderbolt electronics, WD has decided that passive cooling from the casework as heatsink is not sufficient so has fitted a cooling fan. This is a tiny device only 15 mm across that vents from the rear next to the Thunderbolt cable, and only comes on when required. Unfortunately when it does rev up it’s both audible and annoying.

The disks inside, Western Digital WD20NPVX Green disks, are relatively quiet in use, muted further by the heavy chassis.

We shouldn’t expect SSD-like speed from even a RAIDed pair of notebook-sized hard disks, but nonetheless the My Passport Pro proved much quicker than you might expect of low-power laptop drives.

The RAID block size was set to 32 kB by WD which should give slightly more favourable results with some tiny files, although random small-file read speed, averaged from 4 to 1024 kB, was only 17 MB/s; but write speeds in the same setup averaged a more useful 38 MB/s.

Once given larger sequential data, the WD could easily surpass 200 MB/s speeds, peaking at around 215 MB/s to return an average result of 211 MB/s for most files from 2 to 100 MB in size. And in its RAID 0 configuration, it should maintain that kind of performance even as the disk becomes full. See also: Group test: what’s the best portable hard drive? 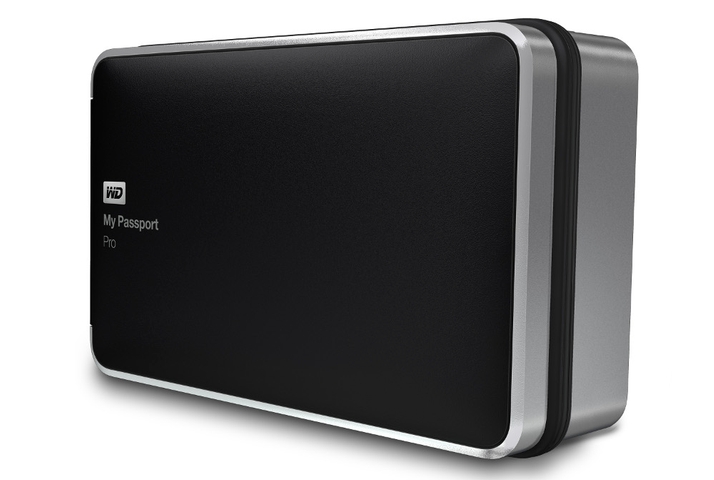