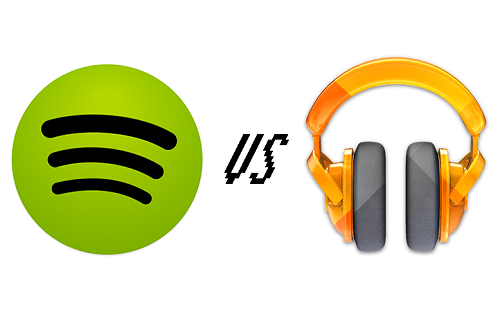 There’s very little to choose between Spotify and Google Music with both offering a high quality streaming service. If you don’t want to pay any money then stick to Spotify with its excellent ad-supported service and buy albums you really want to own on Google Music. Both subscription services are excellent so we suggest making use of the free trials to decide which you prefer – assuming you can’t afford to pay for both.

So you’re a big music lover but all these streaming services are confusing. Here we take Spotify and Google Music and compare the differences between them including quality, what’s on offer, features and apps. See also: Deezer vs Spotify comparison.

Spotify is still the biggest player in the music streaming market but it doesn’t mean it’s your only choice. Google Music is certainly worth a look so read our comparison review to see which the best streaming service is.

The streaming model of Spotify differs from Google Music a fair amount. If you don’t mind listening to the occasional advert, you can listen to music for free. On Google Music, you can only listen to the individual tracks or albums you have purchased – pricing is competitive with many albums under £5 and an album of the week for just 99p. See: Spotify alternatives

One thing both have in common is an unlimited ad-free streaming service. They’re called Spotify Premium and Google Music All Access. You can trial each for a month without paying but afterwards you’ll have to pay £9.99 per month.

The features on offer from Spotify and Google Music are very similar but there are a few small and potentially key differences.

As you might expect, each service can be used on the web and on mobile via apps – iOS and Android for each plus Windows Phone and Blackberry for Spotify. However, Spotify has a desktop application which can be downloaded for PC or Mac. You can use all of these whether you pay a subscription or not but the Spotify app will only let you listen to music on shuffle if you’re using the free service.

No matter which service you opt for, you’ll get music streamed at a maximum of 320kbps which, unless you’re an audiophile, it will satisfy. You will need to be on a monthly subscription to get the higher rate though.

In terms of content, Spotify has more than 20 million songs available to stream. The firm adds around 20,000 each day. Bear in mind that a chunk of these songs have never been listened to so although Google Music has slightly less, the sheer quantity isn’t everything.

What you want from a streaming service is the most recent singles and albums available as soon as they are released. In general, you’ll get that from both but there will occasionally be exceptions. For example, Coldplay has decided to not allow streaming of the latest album, Ghost Stories so only the singles are available.

A real plus point of Google Music is the ability to upload your existing music. You can backup and listen to up to 20,000 tracks which appear alongside you’re streaming content as one happy library. You can easily download content for offline listening by pinning it within the app. Music purchased from the shop doesn’t count towards that limit.

Spotify does allow offline listening but there are a couple of limitations – you can download up to 3,333 tracks to each device and stay offline for up to 30 days. Spotify offers a similar feature to Google Music in that you can play local files. There’s a section for this in the desktop application but you can also sync these files with your mobile device to be played from within the app.

As you would expect from a modern streaming service, both Spotify and Google Music will learn what your taste is like to then recommend content. Both offer radio stations based on the music and artists you listen to. This is only available on Google Music if you pay monthly for All Access.

A free feature on Google Music is Instant Mixes which is similar to a radio station but essentially creates a playlist from your music based on favourite songs or artists. It shows you what’s coming up next and you can skip forwards.

Spotify and Google Music are compatible with speaker systems and other gadgets like Sonos>, Roku players, Apple TV (via AirPlay), Google Chromecast, Smart TVs and more – compatibility varies. Spotify is more widely available in this way, however, in cases such as Spotify on Sonos, you’ll need a Premium subscription.

Spotify has much better integration with social networks. Not only can you post what you’re listening to, you can see what you’re friends are listening to without them posting something specifically. You can also follow artists so you know what they’re listening to and make sure you don’t miss new releases. Furthermore, you can keep track of your streaming habits with last.fm integration.