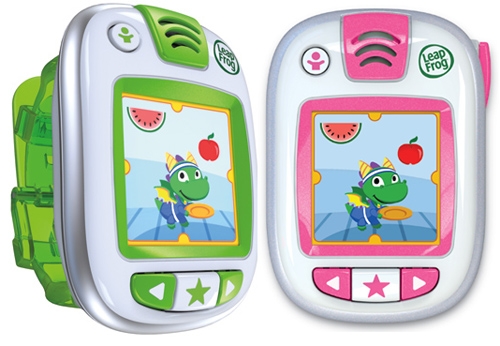 The Leapfrog LeapBand is a lot of fun and is a great way to make sure kids get a decent dose of physical exercise during the day, while letting them have fun and play with gadgets all at the same time. It doesn’t require the LeapPad tablet, and even is compatible with iOS and Android phones and tablets. The design is not too childish so might appeal to kids as old as 9 or even 10, as well as the target 4-7 year olds. You never know it might get you walking like a penguin and stretching yourself a bit, too…

The Leapfrog LeapBand is a wristband activity tracker and watch for kids that aims to get them fitter and healthier while having a load of fun at the same time. It’s like the gym meets the circus.

Activity trackers are great fun for adults, and an increasing number of children who dig the statistics on how far they’ve walked, climbed and even slept.

Technology – or rather, overuse of TV, video games, computers – is often blamed for rising childhood obesity, so the popularity of wearable fitness tech is welcome. Also read: How much screen time is healthy for kids.

Activity trackers, from the likes of Fitbit, Jawbone and Nike, are all the rage, and children can get quite excited by the statistics, competition and rewards they offer.

But none, except maybe the colourful Fitbit Zip, are particularly aimed at a child’s sense of fun.

Enter Leapfrog, maker of the award-winning and immensely popular LeapPad tablets, and its LeapBand activity tracker.

The colourful £29.99 Leapfrog LeapBand is made especially for kids in that it encourages active play plus healthy eating habits with help from a customisable pet pal and a bunch of appealing rewards.

It’s great for the school holidays when parents will be looking to keep their kids occupied doing something more healthy than sitting in front of the telly or games console, and will fight other kids watches this Christmas. Read our comparison review of the VTech Kidizoom Smart Watch vs Leapfrog LeapBand.

Around a third of children aged 2 to 15 are classified as overweight, with nearly half of these as obese.

Official medical guidelines on the amount of recommended activity suggest three hours of physical activity a day for children under five, and an hour a day of moderate activity for children aged 5 to 15. On top of this it is also recommended that vigorous intensity activity, including muscle and bone strengthening activities, should be undertaken at least three days each week by children aged 5 to 15. Read: How much screen time is healthy for kids?

The LeapBand looks like a great way to encourage some targeted but still-fun extra exercise. But does it work?

Our top child tech tester Lexi had a hands-on preview of the Leapfrog LeapBand. She is an experienced tracker user, and loves her Fitbit One – although she has lost three of them!

Leapfrog hasn’t just produced a simple pedometer. In fact the LeapBand doesn’t count steps as such. It sets a series of fun physical challenges – walking, running, jumping and dancing – that the wearer tries to complete to earn “joules” (geddit?) to spend on their virtual pet – feeding, cleaning, grooming and clothing the pet as they earn more points.

Players can choose from a number of different pets, including a cat, dog, dragon, monkey, panda, penguin, robot and unicorn.

There are 10 pre-loaded games, plus another 40 to be unlocked by going up the levels of gameplay.

The activities are a lot of fun, and our eight-year-old tester joined in with gusto. Children are encouraged to “Walk like a crab,” “Spin like a helicopter,” “Crawl like a turtle” and even “Pop like popcorn”.

As they move and earn points, kids unlock each of the additional eight pets and earn virtual toys for each of them as they stay engaged and learning with mini-games including Pet Boogie, Pet Chef and Pet Salon.

In Pet Chef players fill the virtual plate with healthy snacks and learn about nutrition and fun facts. In Pet Parlour they can bathe and groom their pet to earn points and unlock new accessories. And in Pet Boogie they can host a dance party with the pet.

In the companion Petathlon app – for LeapPad, iPhone, iPad or Android device – kids compete as their virtual pet in six mini-games including archery, surfing and bobsledding to win extras such as medals and new tracksuits for their virtual pet.

The LeapBand is not just about getting kids more physically active. It also teaches children about healthy snacks and fun facts about nutrition.

Leapfrog says that the LeapBand is aimed at kids aged 4 to 7 years old, but for once I think a toy manufacturer has underestimated the appeal of its kids’ device. Our eight year old didn’t find the LeapBand too childish and loved the activities. She thinks it would be great fun to enjoy with a group of friends.

She loved the competitive nature of earning the Joule points, as well as being awarded with new characters as she progresses.

The LeapBand has a colourful fit-band with a colour screen, compared to the more minimal, cool adult activity trackers. It will be available in Green, Blue, Orange and Pink. When I first heard about the LeapBand I thought it was going to be childishly cheesy, but like the LeapPad tablets it’s actually quite subdued in that regard. Although it’s quite chunky all the kids we showed it to thought it looked “cool” and shouldn’t be as easy to lose as more minimal adult activity trackers.

It seems pretty tough, has shatter-proof glass and apparently is waterproof enough to take an unexpected dip in the pool. We didn’t test this! The small print in the instructions warns against using the LeapBand near a sink or other wet locations, so I’d suggest you ignore the waterproof claim.

The LeapBand clearly has the potential to distract a child from other activities so it can be set by parents to work as a plaything at certain times of the day. For example, set it watch-only mode during school hours and at night time. You set up the times it can be used on the Leapfrog Connect app via your computer.

The child can wear it to school as a watch (digital or analogue) without it disrupting school work. It also works as a stopwatch, and what kid doesn’t like timing things?

Parents might like to try letting kids play with it at wake-up time in a bid to cajole their child out of bed in the morning, and it can be set to just watch function after bedtime. The last thing you need your child doing is leaping around 10 minutes before lights out…

There are three modes.

Move Mode is the default state, which uses the tracker’s accelerometer to track motion. Thankfully the sounds are not active during this mode, and neither is the screen, which should save battery life.

Player Mode gives access to all the games and challenges. If not used for a while, the LeapBand reverts to Move Mode.

Parents will be thankful for the Quiet Time Mode, which banishes audio, animation and gameplay. Only the clock shows if a button is pressed.

The LeapBand syncs with Leapfrog’s Connect download site and charges via the supplied USB cable. Parents can set up to 36 more challenges in LeapFrog Connect so kids will hear fun activity prompts like “march like an elephant” and “wiggle like a bug”.

In the meantime the LeapBand’s Quiet Time mode can be activated by pressing and holding the Left Scroll button on the tracker for five seconds.