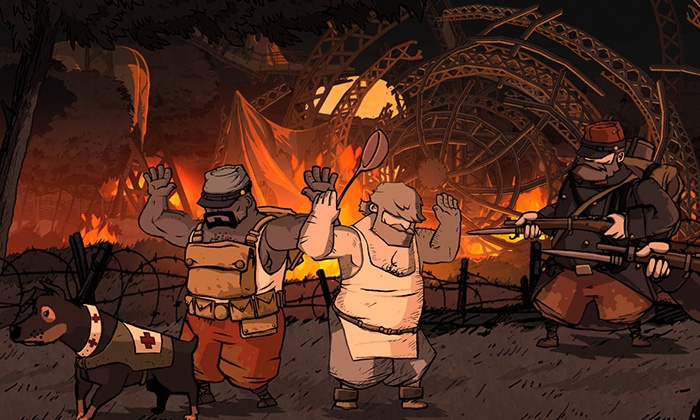 Valiant Hearts: The Great War is beautiful and brave, but it doesn’t land as many emotional punches as it might have done, while the puzzles’ challenge will underwhelm most grown-up players.

“Adventure game set during World War 1 and styled like a French animation” is the kind of description one might expect from an experimental indie game, but not so much from Assassin’s Creed and Far Cry publisher Ubisoft. Here’s Valiant Hearts though, the prettiest thing you ever did see.

It’s very easy to expect it to be a subdued, tragic affair, covering as it does one of humanity’s bloodiest conflicts. However, the beautiful 2D, comic-like graphics are the only way in which Valiant Hearts is genuinely unusual. At its heart it’s a fairly routine point-and-click puzzle game, with a propensity for the wacky and outlandish rather than dwelling too much on the reality and darkness of war.

There are sad moments in its tale of four very different protagonists drawn together through conflict, but for the most part it’s cartoon capers. There’s even a suspiciously smart and super-helpful dog in there – it’s not quite Scooby Doo in the Somme, but it’s certainly not All Quiet On The Western Front.

It’s difficult to tell from afar – especially as the marketing has tried to make Valiant Hearts look like a hand-drawn War Horse – but it may well be that this is really a children’s game. Carefully-told nuggets of WW1 history are in there, and might well be picked up by a curious young mind in between solving puzzles about organ-playing dogs and giant underground gas machines, or rhythm action sequences in which Parisian cars dance to the Tango. On that basis, Valiant Hearts is a triumph – educational without being at all overtly so.

For an adult, it’s more problematic. The rhythm action sequences (also used, bizarrely and inappropriately, to perform field surgery on shelling and gas victims) are irritating, while the more general puzzles too often involve finding levers to open doors, so it can be a bit of a slog. They’re rarely hard – if anything they’re too obvious – but there’s a lot of trudging back and forth required to complete them.

A sustained level of visual invention makes Valiant Hearts hard to put down despite this, but the reason to continue is to find out what artful oddity will next occupy your screen, not because of any sense of triumph from the puzzles.

The game’s tendency to lean towards the absurd also harms its ability to be moving, which is a great shame. When tragedy does occur it rings hollow, because we’ve seen characters survive other things unscathed and repeatedly perform superheroic acts.

The takeaway sense is that Valiant Hearts has a bold appearance and a bold subject matter (both in terms of World War 1 being an uncommon game setting and that this isn’t an action title) but it couldn’t quite find the game design to go with it. Even so, it’s really not far off ‘not to be missed’ status. It might not get it quite right, but games that aim as high as this – especially when they come from an organisation which usually makes determinedly mainstream action games – really should be encouraged.