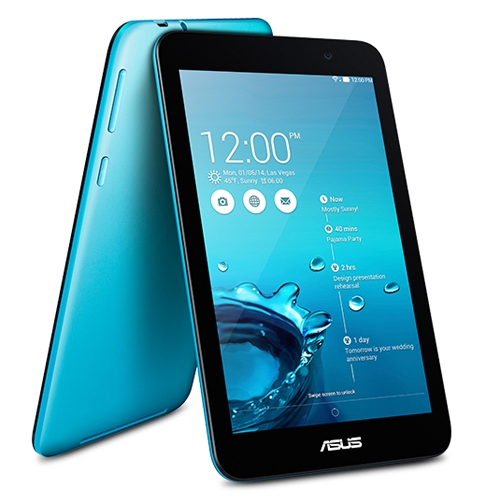 For just £120, we’re really impressed with the Asus Memo Pad 7. In addition to a good-looking design and sturdy build, it also boasts hardware that rivals tablets with much higher price tags. A higher-resolution screen and front-facing speakers would add even more appeal, but if you’re looking for a budget tablet and have been considering the Tesco Hudl, Kindle Fire HD or even the Nexus 7, it’s worth investigating the Asus Memo Pad 7, too.

Asus has launched a new generation of Android tablet, taking another stab at the 7in market with the new Memo Pad 7, which joins the Memo Pad 8 and new 10in Transformer Pad in the latest Asus tablet line-up. At just £120, this budget 7in tablet takes on the likes of the Tesco Hudl, and challenges the £199 Nexus 7. Here’s our full review of the Asus Memo Pad 7. See also: The 25 best tablets of 2014

The budget tablet market has been a bit of a risky area for consumers in the past, but since the launch of several impressive but cheap tablets like Tesco’s £120 Hudl, the £120 Amazon Kindle Fire HD and the £159 Barnes & Noble Nook HD, the reputation of the sub-£200 tablet market has improved vastly. See also: Best budget tablets

So much so, in fact, that the £199 Nexus 7 is actually top of the PC Advisor tablet chart for 2014 right now, beating the likes of the £400 tablets such as the iPad Air and Sony Xperia Z2 Tablet. So how does the Asus Memo Pad 7 fare against this tough competition? Read on to find out.

Like the Tesco Hudl, the Asus Memo Pad 7 (ME176CX) comes in several colours, though we find Asus’s colour choices decidedly more appealing. We tested a rather delightful metallic blue model, but there are also yellow, red, black or white options available.

Overall, we found the design and build of the Asus Memo Pad 7 to be surprisingly solid and attractive for a budget tablet. The bezels around the 7in display are small, particularly compared to the Hudl, Nook HD and Kindle Fire HD. Although plastic, the back has a smooth, premium-feel finish, and the ports, speakers, camera and buttons are neat and stylish.

The weight and thickness of the Asus Memo Pad 7 is ideal for a 7in tablet, with the width of the device in portrait mode perfect for gripping with one hand. You’ll need two hands to use the tablet while holding it, but for reading or watching a video, holding it with one hand won’t get too heavy, and you won’t feel like you’re about to drop it.

There’s no flap to cover the microSD slot, though, so we imagine it could get rather dusty in there if you’re not using a card. Also, we found that the tablet’s screen is quite reflective and really shows up fingerprints and smudges.

The Asus Memo Pad 7’s 7in IPS display has a resolution of 1280 x 800 pixels, making a 216ppi pixel density. That’s a bit disappointing when you compare it with the Nexus 7’s 323ppi display, and even the Tesco Hudl’s 243 ppi. However, we found the screen to be bright, colourful and crisp enough for most – you’ll only really notice the lower pixel density if you’re already used to using a much higher resolution display.

Inside the Asus Memo Pad 7 is an impressive 64-bit 1.86 GHz Intel Atom Quad-core processor with 1GB RAM. Intel’s Atom processor is powerful enough to be used in netbooks and hybrids, in addition to tablets and smartphones, so is a fantastic selling point for a budget tablet like this one.

Although Android isn’t 64-bit just yet, we found the Memo Pad 7 to be responsive and smooth, and it performed most tasks we through with ease. Apps launched quickly on most occasions – even the camera app, which is often found to be the downfall of other tablets and smartphones. There were a few times when we found the tablet a little laggy, but thankfully it was rare enough that we hardly noticed.

In our benchmark testing, we found that the Asus Memo Pad 7 scored 2400 in our GeekBench 3 test, 14.4fps in the Manhattan GFXBench graphics test and 608ms in the Sunspider browser test. Those results are higher than the likes of the Tesco Hudl and quite similar to the Samsung Galaxy Note 8.

There’s an option of either 8GB or 16GB internal memory, but you’ll be pleased to hear that there’s a microSD slot that allows you to add an extra 64GB if you need it. This is something that the Nexus 7 lacks, but the Tesco Hudl has a microSD card for adding up to 32GB more.

We rather like Asus’s ZenUI interface for Android 4.4 KitKat. It’s not so different that you’ll find it unfamiliar, but it does offer flat, simple and easy-to-understand icons and apps across the board, complete with gentle and pleasant colour schemes.

Notably, the What’s Next feature is a neat way of managing your schedule, bringing together events, meetings, birthdays and more from different apps. It’ll also provide you with reminders if you’ve got an appointment coming up, for example.

Do It Later (above) is also handy for helping you remember to read that email you got in the middle of lunch earlier, or watch a YouTube video you didn’t have time to view for example. It’s pretty smart too, organising the tasks into categories so you don’t have to sort through the list when you come to complete them.

The Asus Memo Pad 7 has a non-removable 15Wh battery, which Asus says will last for nine hours of constant use.

We’ve been using the Asus Memo Pad 7 for browsing the web, sending emails and using social media occasionally throughout the day and have found that it can last for several days with this kind of use. If you’re a gamer or like to watch videos or TV shows on your commute, you will find that the battery drains quicker, but you won’t need to charge it more than once every couple of days.

The Memo Pad 7 has an excellent Power Saver app, which allows you to turn on what Asus calls ‘Smart Saving’ options, including optimised mode for general battery life extension, ultra-saving mode if you’re running dangerously low, or a custom power saving mode that you can adapt to your preference.

The Asus Memo Pad 7 has two cameras, one on the front and one on the back. The rear-facing camera is 5Mp like the one found in the iPad mini and iPad Air. We found the results to be reasonable, but you won’t be printing the snaps and framing them. They’re not particularly sharp and many of our test photos were quite grainy, especially in darker conditions.

You can see some examples of the photographs we captured using the Asus Memo Pad 7 below. Click to see a bigger image.

Above: This 100% crop shows that the photographs captured by the 5Mp rear-facing camera on the Asus Memo Pad 7 lack detail and are quite grainy.

The camera app is nice though, with previews of fun filters and effects, including Lomo (above right), Sepia, Cartoon, Hue and more. There’s also a useful Burst Mode for action shots and moving subjects. Other options include HDR, Panorama, Night, Selfie, All Smiles, Portrait and Smart Remove, which automatically removes moving subjects.

Above: The Asus Memo Pad 7 highlights a moving object (left) and gives you the option to remove it (right).

We don’t usually like to use tablets to take photographs – it always seems like a bit of a clumsy task – but we found that it actually felt quite natural with the size, shape and overall feel of the Memo Pad 7.

The Memo Pad 7 can capture 1080p video, too, and the results, again, were reasonable. It’ll do the trick, but if you’re heading out with the view to capture something on video, we’d recommend taking another device with better video capabilities.

On the front of the Memo Pad 7 is a 2Mp camera ideal for video calls, with 720p video recording.