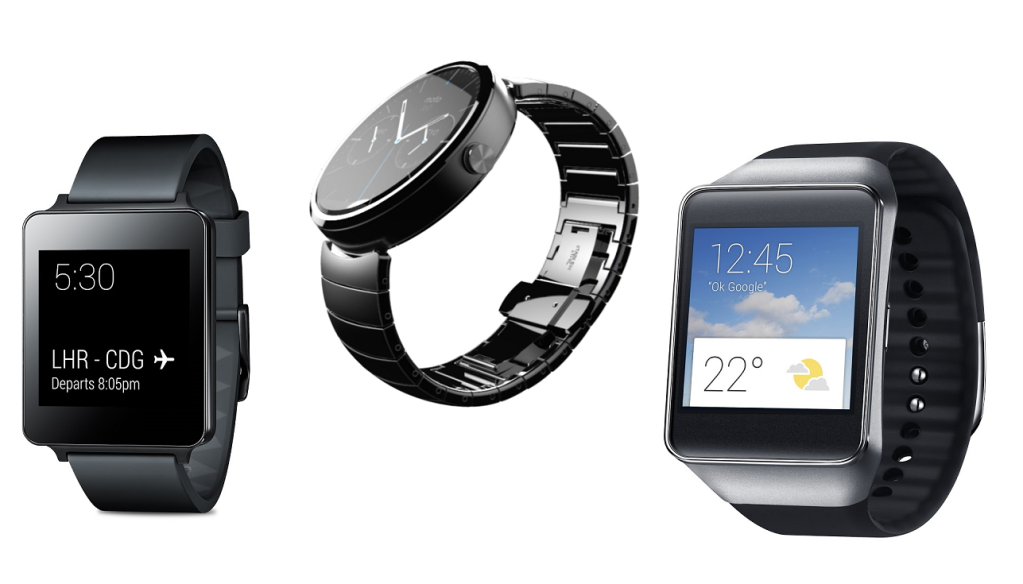 While the LG G Watch is the cheapest, the Samsung Gear Live is a little thinner and lighter. It also has a heart rate monitor and a higher resolution screen which might make it worth an extra tenner from your wallet. Although it’s likely to be more expensive, those wanting the most stylish should wait for the Motorola Moto 360.

At Google I/O, the firm gave more detail on Android Wear for smartwatches. There are three devices at the moment so here we compare the LG G Watch, Samsung Gear Live and Motorola Moto 360.

Both will launch in the first week of July but the Moto 360 won’t arrive until ‘later this summer’ and that means we don’t have a price for it. However, we expect it to be more expensive than its Android Wear rivals – possibly around the £200 mark or even a little more.

Motorola listed the ‘average retail price’ for the Moto 360 as $250 in the terms and conditions for a competition.

We think the Moto 360 is the most stylish of the three Android Wear smartwatches. However, we can’t give you its specifics until Motorola reveals more details.

The Gear Live is both thinner and lighter than the G Watch at 8.9 mm and 59 g compared to 9.95 mm and 63 g. Both watches are listed as IP67 dust- and waterproof and the Moto 360 is water resistant, according to Google.

A small difference is that you can change the strap on the G Watch to any 22m strap while the Gear Live’s is fixed. The Moto 360 will come with a leather or metal strap.

Colours for the G Watch are ‘black titan’ or ‘white gold’ while the Gear Live comes in ‘black’ or ‘wine red’, although we can’t see the latter on the Google Play store yet.

Common for smartwatches, the G Watch and Gear Live both have square screens while the Moto 360 is your only option if you want a circular display. Unfortunately, Motorola is being secretive about the Moto 360 specs so we’ll look at the others for now.

It’s unsurprising that the Android Wear smartwatches have similar hardware specifications. Both the Gear Live and G Watch use a 1.2GHz processor, Bluetooth 4.0 Low Energy, 512MB of RAM and 4GB of internal storage. They both use USB pogo pin ports for charging and come with a charging dock/cradle in-the-box.

Each has an accelerometer, compass and gyro but Samsung adds a heart rate monitor which you won’t find on the G Watch or Moto 360.

Battery capacity is a little lower on the Gear Live at 300mAh while the G Watch has 400mAh. However, both tout ‘all day’ battery life. Rumour has it that the Moto 360 will support wireless charging.

This is the one area where there is no difference, since all three run Android Wear. It’s worth noting that you’ll need an Android smartphone running version 4.3 (Jelly Bean) or higher to be compatible with the Android Wear smartwatches.