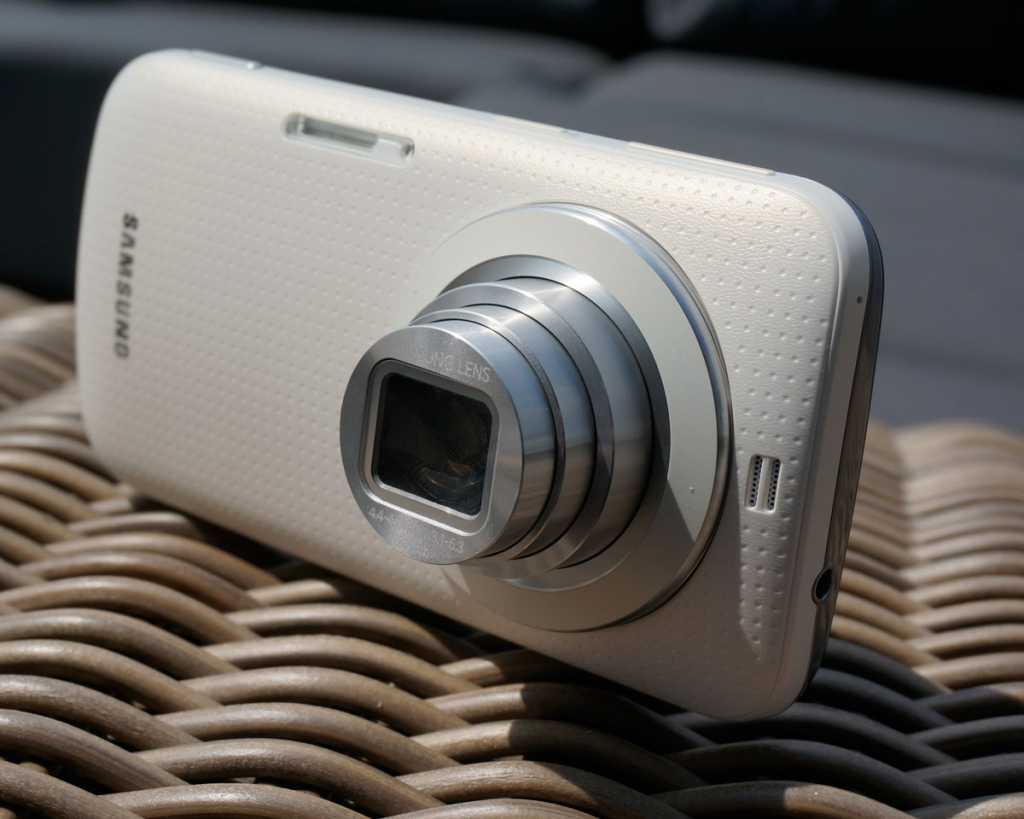 By no means the perfect combination of a smartphone and zoom lens, the K Zoom isn’t half bad. It’s capable of great photos and videos in the right conditions. This isn’t a device for everyone, but if the “zoom camera with a built-in smartphone” concept appeals to you and you don’t mind the size and weight, it’s currently your best option.

Smartphone cameras are ever improving, but they lack one crucial feature: a zoom. Not so with the Galaxy K Zoom. This Android smartphone has a built-in 10x zoom lens. Find out if this unusual marriage is successful in our Samsung Galaxy K Zoom review.

The concept of bolting a huge zoom lens to the back of a smartphone isn’t new. In fact, Samsung has already tried a couple of times in the past with the Galaxy Camera and Galaxy S4 Zoom. Both were bad products and were arguably the worst of both worlds instead of being the best. They were underpowered, and their cameras weren’t particularly good.

Clearly, then, Samsung is determined to make the marriage work third time around with the new Galaxy K Zoom. It takes a smartphone, which looks like a hybrid of the S4 and S5, and shoehorns in a 10x optical zoom lens.

Software-wise, Android KitKat is order of the day as is Samsung’s TouchWiz interface. It’s all very familiar if you already have a Samsung smartphone: there’s S Voice, the Samsung app store and Dropbox pre-installed.

If you’re considering a K Zoom then you’re clearly more serious about photography than the average smartphone owner. So, the important specifications concern the camera side of things.

The lens zooms from a nice wide-angle 24mm (equivalent) to 240mm, or 4.4-44mm in real terms. Its maximum aperture ranges from f/3.1 to f/6.3. The 20.7Mp sensor is the type you’d find in a budget compact camera, measuring the usual 1/2.3in. That’s much bigger than the normal smartphone camera sensor, though.

It can shoot 1080p video at 30 or 60 frames per second, and there’s the same choice at 720p. Stabilisation is optical rather than electronic.

ISO ranges from 100 to 3200, and the continuous shooting mode runs at a claimed 3fps when using autofocus.

There are dual microphones, one at each end of the phone, and a slimline flash and AF assist LED on the rear. You get a dedicated dual-stage shutter button, so it’s possible to lock focus and then recompose your shot.  Using the touchscreen you can choose separate focus and exposure points.

For the smartphone, there’s a 4.8in Super AMOLED screen with a 1280×720 resolution. Processing power comes from a combination of a 1.3GHz quad-core chip and a dual-core 1.7GHz processor.

It’s paired with 2GB of RAM and 8GB of internal storage. As you’d expect, you can also pop in a microSD card to add up to 64GB extra – something you’ll need to store lots of photos and HD video.

Inevitably, you’ll have to make some compromises if you want a whacking great zoom lens in your smartphone. At 200g, the K Zoom isn’t particularly light and although it’s impressively thin for a camera, its 20.2mm thickness means it’s not going to slip easily into a trouser pocket.

There’s no finger grip as with the old S4 Zoom, and the dimpled plastic panel unclips to reveal the removable battery. The fact it’s removable is essential since you’ll want to carry at least one spare around with you on special occasions to get through a whole day. Shooting lots of video and photos drains the cell quicker than you’d imagine.

From the front, you wouldn’t suspect anything was unusual about this smartphone as it looks just like Samsung’s other recent models.

There’s a silver band around the edge and a physical home button flanked by two touch-sensitive buttons. The off-centre front camera has a mere 2Mp sensor, so for hi-res selfies, you’ll have to use the self-timer and balance the K Zoom somewhere suitable.

Apart from the screen resolution, which is lower than we’d like, the K Zoom has a great screen. Colours pop on the AMOLED panel, and viewing angles are great. Watching videos is a particular treat on the 16:9 screen, as it composing photos and shooting videos – you can easily see whether they’re in focus or not.

The ‘Hexa core’ Exynos 5 processor sounds better than it is. For the most part, Android is nice and smooth but during our testing there was the occasional stutter when flipping between home screens and in apps.

Web pages load quickly, and it was quick to zoom around Google maps. Gaming performance is acceptable, with 24.5fps in the GFXBench T-Rex test, but the new Manhattan test shows the Galaxy K Zoom’s limit: it ran at just 4fps.

What you’re probably more interested in is the K Zoom’s photo and video quality.  Overall, it’s not bad at all, especially when compared with the current batch of mid-range (and even flagship) smartphones.

Shots are generally well exposed and sharp, but you’ll need a steady hand to avoid blur at full zoom. The OIS system does its job and kept most of our telephoto shots free from blur, and autofocus is quick, too. Plus, the face detection and tracking system works well.

The wide-angle position allows you to capture much more than most smartphones, so it’s great not only for landscapes but also indoor group photos where you can’t move any further back.

Here’s the difference between wide-angle and full zoom:

Here’s what the image above looks like when viewing the actual pixels 1:1 (a 100 percent crop):

For comparison, the two shots below show the difference between the K Zoom at 10x and what you’d get from the iPhone 5s if you cropped in to get the same image (click to enlarge):

Photos are ideal for sharing on social media, but they don’t stand up to close scrutiny in Photoshop. Look at the 100 percent crops below and there’s an obvious lack of detail. The noise-reduction system is the most likely culprit: it does a good job of suppressing noise, but at the expense of fine detail, resulting in smudgy skin tones and brickwork, for example.

It takes a couple of seconds to fire up the camera app when the K Zoom is off and locked, and it’s a shame you can’t launch the camera app using the shutter button. Instead you have to press the sleep/wake button or home button, then swipe the camera icon. It will be fine for most occasions, but don’t expect instantaneous DLSR-like responsiveness.

The screen makes for a great viewfinder except in bright sunshine when it’s difficult to see because of the glare.

The camera app itself is easy to use and allows you to choose picture and movie sizes. By default, photos are taken with a 16:9 aspect ratio which looks fine on the screen, but it cuts the resolution to 15Mp. It’s better to go for the full 20.7Mp resolution which has a 4:3 aspect.

Disabled by default is a manual mode which gives you control over shutter speed, aperture, EV correction and ISO, but there’s no white balance control. More useful would have been aperture- and shutter-priority modes, but we suspect few people would use these and the manual mode anyway.

There’s an unusual Pro Suggest mode where you can choose from presets saved by other users, such as ‘vivid colours’ or ‘cross process’. The clever part is that the five presets are suggested only after you’ve half-pressed the shutter and the scene has been analysed. Whether you’ll find it useful is debatable, but it can be a nice timesaver as you won’t necessarily have to apply effects after taking the photo.

Video is decent enough, too. Detail levels are good, and footage is sharp (there’s definitely some software sharpening happening in-camera, though). It isn’t as good as a dedicated HD camcorder, but it’s unfair to compare the K Zoom to one.

Clips look much better than the average smartphone video though and you get the benefit of being able to zoom during filming and get much closer to the action. A niggle is that the audio temporarily switches from stereo to mono when you zoom in or out. This could be a bug – we’re yet to hear back from Samsung on that. It’s good to see a quiet zoom mode which slows down the motor to prevent it making unwanted noise on your videos. Audio – often an overlooked aspect of video – is more than acceptable.

These photos are all straight from the camera, unedited. However, they have been resized to 1200 pixels wide so they fit your screen. Click each (apart from the 100 percent crops) to enlarge them.

The image below is a 100 percent crop of the photo above:

The image below is a 100 percent crop of the photo above:

As with the Galaxy S4 Zoom and Galaxy Camera before it, the K Zoom is a niche product. It’s for those who want better-quality photos from their smartphone, and it delivers on that front. The mere fact it has a 10x zoom makes all the difference between a usable photo and a blurry dot in the when you can’t physically move closer to your subject, such as when you’re at the zoo, for example. The problem is, those are the occasions when you’d probably take a better camera along with you anyway.

There’s also the problem that the K Zoom is all about compromise. The extra weight and bulk is simply annoying when you’re not taking photos, and battery life is a worry if you’ll be taking photos and video all day long. Currently it isn’t even possible to buy spare batteries for the K Zoom, at least not online from the usual retailers.

If you’re one of the few that wants a smartphone with a decent camera and an optical zoom, the K Zoom isn’t a bad choice. Unlike the Lumia 1020, which runs Windows Phone 8, the Samsung runs Android so you won’t have to compromise on the choice of apps.