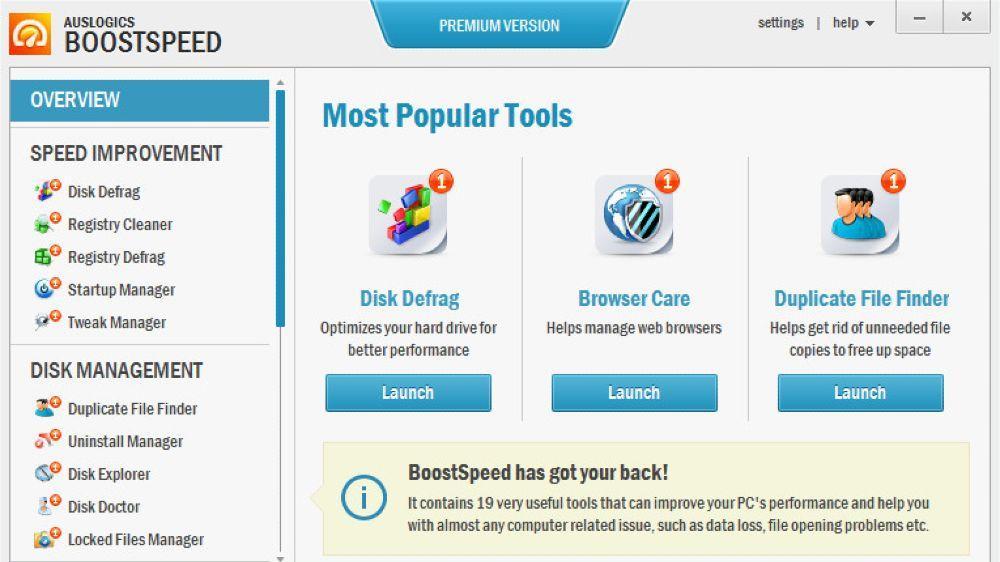 BoostSpeed 7 Premium may improve the speed of your Windows PC, but the housekeeping and repair facilities are just as important and there are lots of them here. The software is very easy to use and offers several functions not seen in similar suites. There’s a free Basic version of BoostSpeed 7, offering 8 of the 19 tools in the Premium product.

There are a lot of software applications which claim to speed up and clean up your PC or laptop, but few as comprehensive in what they offer as Auslogics BoostSpeed 7 Premium. This suite offers 19 different utilities, which cover all the areas you might expect and a good few you might not. (See  How to speed up a computer; speed up any PC or laptop for more tips.)

Taking what you might expect first, there are three different automated fixes, labelled Disk Space, Computer Stability and Computer Speed.

Each of these works through a three-step wizard, which runs a scan to show what needs doing, offers you the chance to tailor how it does it (select drives to be worked on, for example) and then perform the fix.

On our test machine, a fairly typical legacy specification, but with perhaps less clutter than a heavily used office machine, it took just under a minute to scan 600 GB of hard disk in six partitions. It highlighted 323 MB of recoverable space, 115 stability issues and 62 speed issues. It then took around three minutes to run fixes.

As well as the three core features, the All Tools screen shows functions listed under Speed Improvement, Disk Management, OS Management and Privacy Protection. Speed Improvement includes a flexible disk defragmenter and Registry cleaner/defragmenter. Startup management lets you tweak the processes which kick in at startup.

Disk Management adds a duplicate file finder and disk doctor, to a disk explorer and uninstall manager. The disk explorer shows which apps use the most space, although it’s not obvious why this is useful. Surely you’re more likely to uninstall an application because you don’t use it much or because it’s causing trouble, rather than because of its size?

The Disk Doctor is more useful, as it can find and fix disk errors. It spotted errors on one of our test disks and fixed them, but it didn’t say what they were, so Windows Scandisk might have done as well.

OS Management includes a useful internet connection optimiser, which offers suggested network settings and can work automatically or manually. Privacy Protection offers deleted file recovery, a file shredder and a free space wiper, which overwrites deleted disk areas to prevent data recovery. These tools are said to clean ‘securely’, but no details are available of the security standards used. (There’s more advice in our feature, speed up your PC with Windows built-in tools.)

Those tools which have separate control screens are laid out with a design more reminiscent of XP than Windows 7 or 8. It proved a bit disconcerting to switch from the more modern front-end to these detail screens.

BoostSpeed 7 Premium review: does it make your PC faster?

Does BoostSpeed actually boost speeds? We timed Windows startup, to the end of any obvious disk access after the desktop had appeared, the startup of Chrome and Word and the scan time of a set folder, using Microsoft Security Essentials. (See also: Does PC speed boost software work?)

Start-up on our, reasonably clean, testbench machine took 2 minutes 11 seconds before running the BoostSpeed wizard and relevant tools; and 2 min 9 sec after. This is not a huge difference, and the MSE scan took exactly the same time before and after, too.

The application start ups showed more improvement, with the Chrome browser taking 9 seconds where before it had taken 12s and Word starting in an impressive 3 secs, less than half the time as its previous 7 secs. See how to use System Restore to fix a Windows PC.