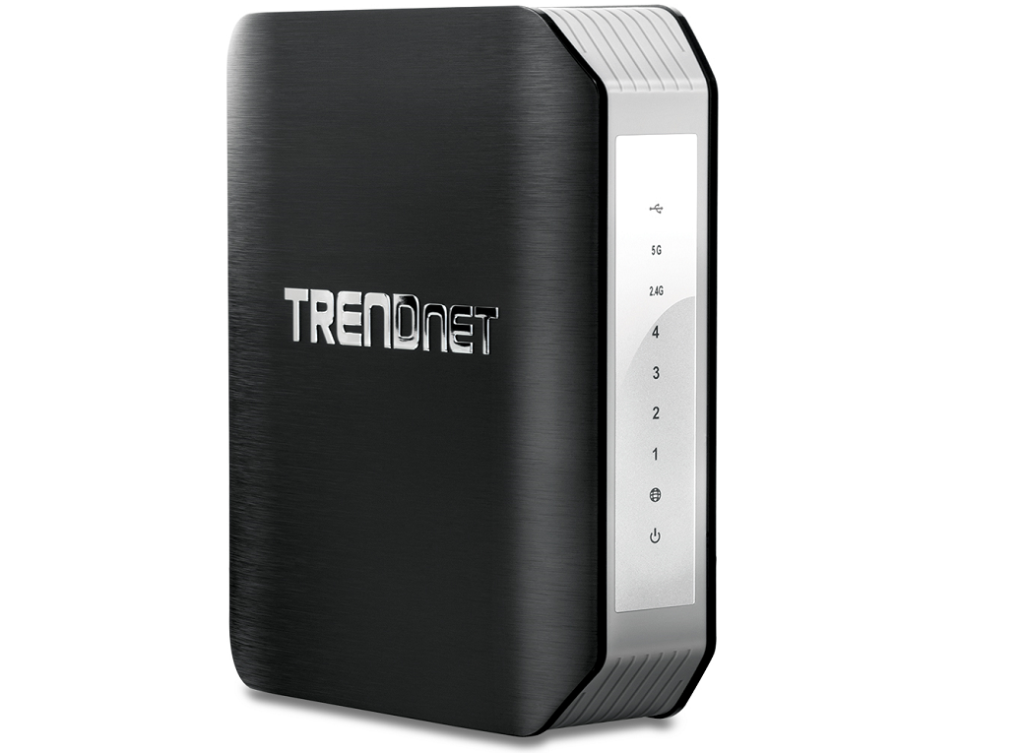 The Trendnet TEW-818DRU looks better on paper than we experienced in practice. Thanks to its 3×3 MIMO configuration, its short-range performance is up there with some of the fastest 802.11ac routers, but it was less impressive at long range. The software has all the necessary functions buried within it, but it’s simply not as good as the interface found on more familiar models from Linksys, Asus and others. Its USB function didn’t work well, the software is rather basic. While some of the premium models cost over £150, the price of the TEW-818DRU is not that far behind. We’d suggest spending a little more for a router that manages consistently good results, such as the Asus RT-AC68U. 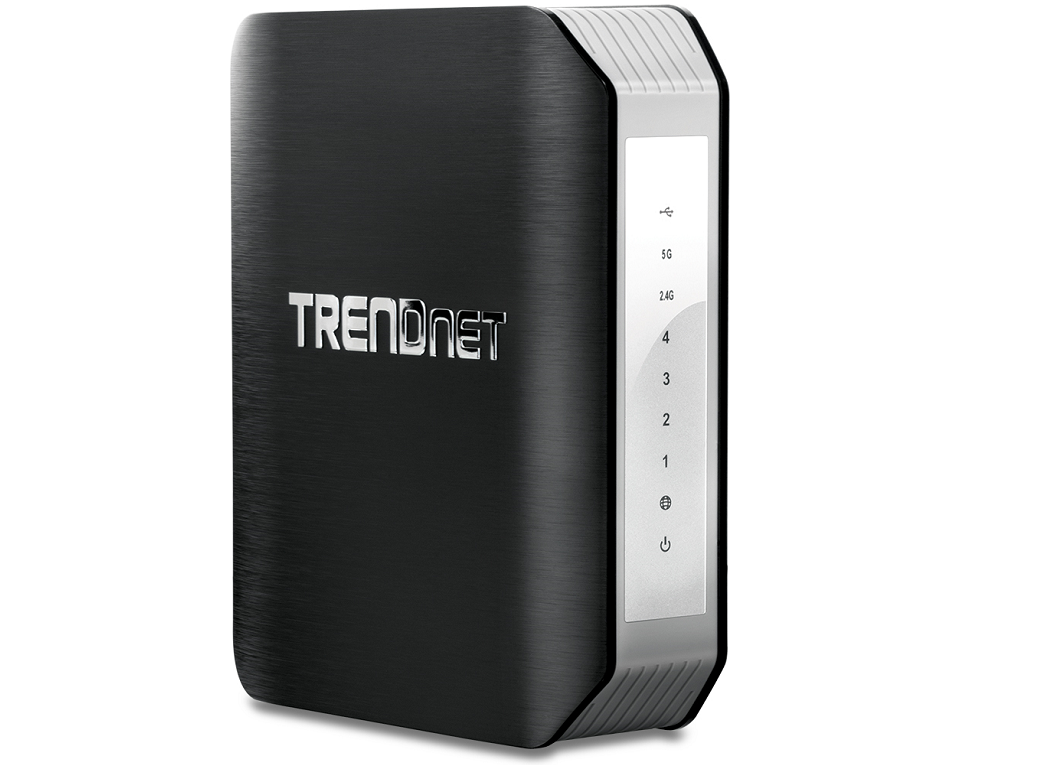 The upright, book-like design of the TEW-818DRU –TrendNet’s first 802.11ac router – is hardly inspiring. As with legions of other routers, it’s no more than a plain, chunky plastic box. But its trump card isn’t its appearance, but the potential value for money it offers – it has an excellent specification and costs £120, a little less than many other 802.11ac routers. See  Group test: what’s the best wireless router?

For that money, you get a 3×3 MIMO (three-stream) 802.11ac router, which is by no means a standard feature on all 802.11ac routers, since some only provide two streams, which limits the maximum wireless speeds they offer.

Using Broadcom’s chipset, the TEW-818DRU also supports its proprietary TurboQAM, a technology that claims to boost 802.11n speeds from 150 Mb/s per stream to 200 Mb/s, as long as the connected wireless client also supports it. See also: BT Home Hub 5 review.

It does this by increasing the modulation scheme from 64-QAM to 11ac’s 256-QAM, but is specific to wireless receivers that use the Broadcom BCM4335 chipset.

Along with the usual four gigabit ethernet ports for wired networking, plus another one for a WAN connection, you also get a pair of USB ports at the back, one USB 2.0, one USB 3.0. There’s also a WPS button and a on/off power switch.

DD-WRT compatibility is listed, and you can download open-source firmware from Trendnet’s site. This partly addresses the modern concern of anyone worried of potential backdoors written into the code, although it still requires knowledgeable people to audit the code. See all Wi-Fi and networking reviews.

The software interface of the TEW-818DRU is somewhat plain, at least compared with the Javascript-heavy visual interface offered by firms such as Asus and Linksys. While there’s a good range of options, such as guest networks, port forwarding and a firewall, split into Basic and Advanced sections, some of the functions are rudimentary at best. 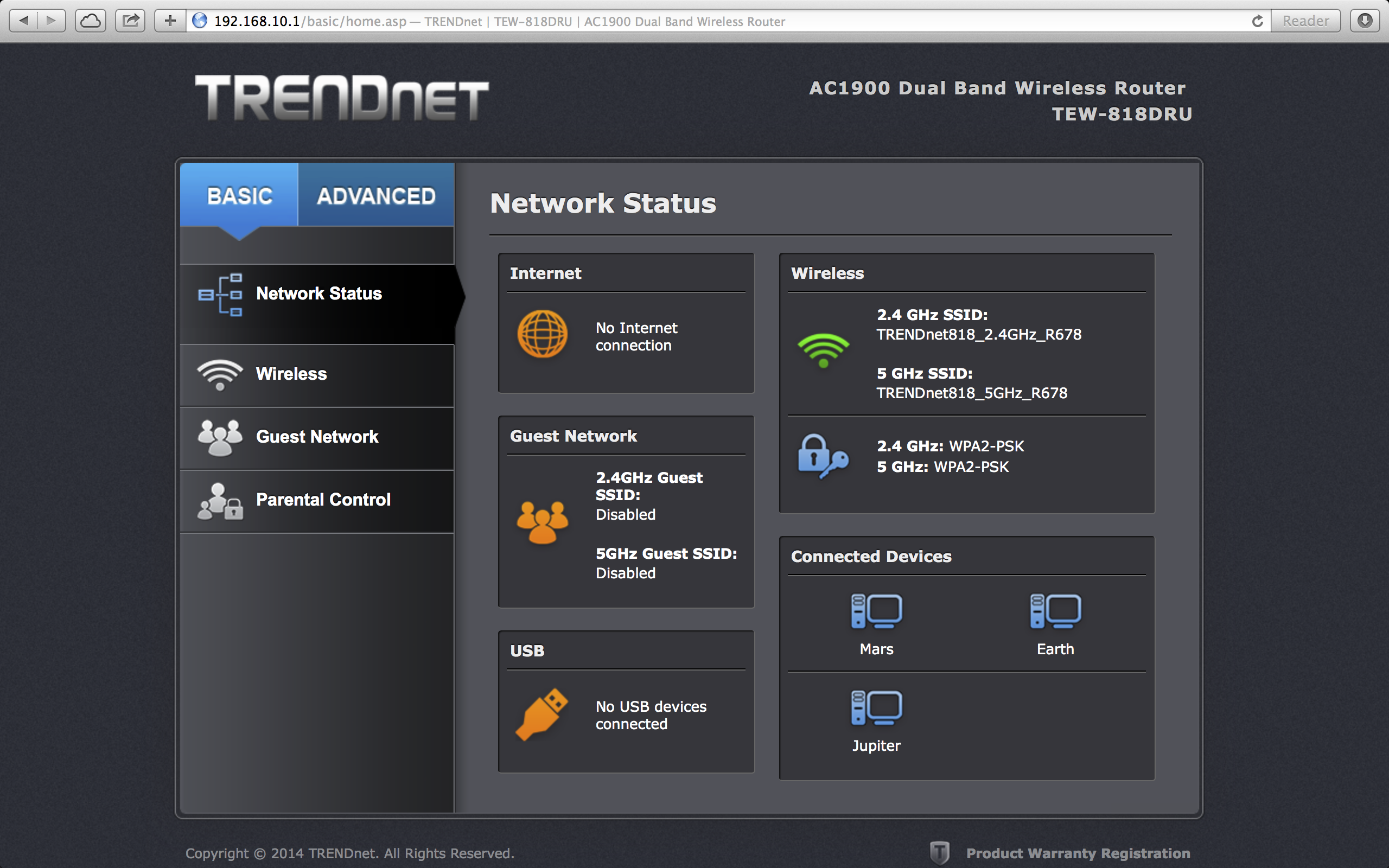 The parental controls feature for example, is just an empty table for you to add blocked sites to, and manually apply to a range of IP or MAC addresses. It’s hardly user friendly.

The processor is a 1 GHz Broadcom chip, although the interface wasn’t as responsive as we’d like. As expected, switching pages was near instantaneous, but adding entries to tables required a 15-second wait before the page reloaded.

The USB function didn’t work well. We plugged in a range of devices and they were clearly detected in the USB section of the router’s software. But the devices did not automatically show up on the network either in Windows or OS X.

We managed to access them by manually entering the IP address of the router, to find that speeds weren’t great. Write speeds of 6.4 MB/s are poor compared with the double-digit transfer rates now possible from some high-end routers.

We tested the wireless performance of the TEW-818DRU with the Mac software WiFiPerf, for a clear view of performance without any potential bottlenecks such as disk transfer rates getting in the way.

Using a 2013 MacBook with 802.11ac Wi-Fi, but which doesn’t support Broadcom Turbo QAM, we measured speeds using 802.11n and 802.11ac protocols. This was at 1 metre and 2 metres with clear line of sight between the router and laptop, then again at 8 metres, with a small partition wall in between.

At 2m distance, speeds were roughly the same: 158 Mb/s client to server and 150 Mb/s server to client.

But at distance, our 802.11n results were erratic. A two-minute data transfer from the laptop to the sever yielded an average transfer rate of 79 Mb/s. While that looks reasonable, it dropped to far lower speeds occasionally, and was equally faster at other times too. Transfers from the server to the laptop were more stable, averaging a more consistent 126 Mb/s.

And during our final test at long range, the TEW-818DRU was as choppy on 802.11ac as it was on 802.11n, with bursts around 200 Mb/s, but dropping out completely for short periods. The average speeds we recorded were 48 Mb/s from client to server and 99 Mb/s from server to client, which are worse than the results for 802.11n. This is a major blip in otherwise reasonable performance results.