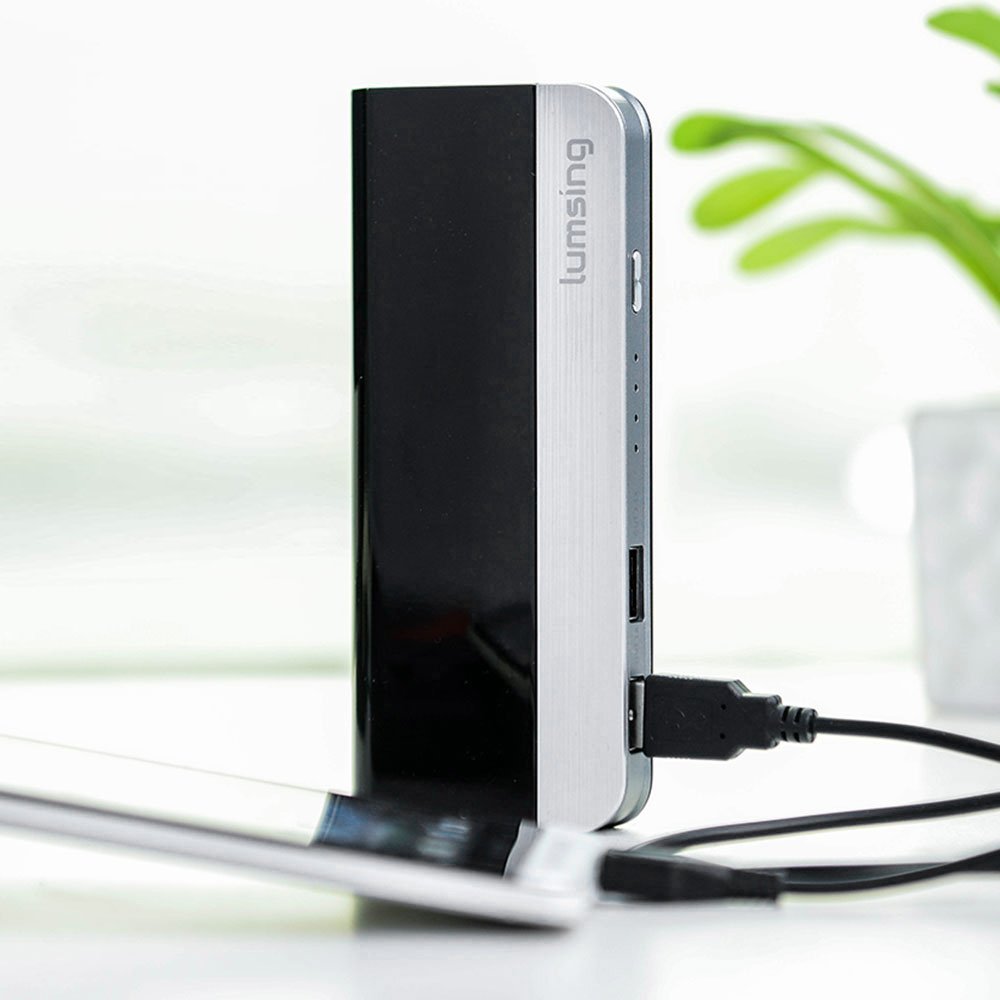 At £17.99 the Lumsing Power Bank is a fantastic buy, able to keep all your devices going several days away from the mains. If you’re planning a camping trip or going to a festival, take the Power Bank with you.

Lumsing’s Power Bank is a must-have for festival-goers and campers this summer, allowing you to charge your smartphone, tablet, camera and any other 5V USB-powered device wherever you are. Also see: Best holiday-planning apps.

It’s a 159g, 138x59x20mm harmonica-style device, about the same height as our Samsung Galaxy S4, but a little chunkier and about two thirds of its width. You probably won’t want to carry it in your pocket (if this is what you need check out the wallet-sized Onaji Pawa Card emergency charger), but the Lumsing will be an easy fit in your bag or even left in your tent. At just £17.99 on Amazon (but with an RRP of £45), you won’t need to guard it with your life, and a soft case is supplied to protect it from any mud splatters and accidental damage.

The Power Bank is available in shiny black or white, with a brushed-metal-effect band on the top and a silver plastic edge. It looks surprisingly good for its low price, and feels reassuringly sturdy. Also see:  Best power banks 2018.

Inside is a Grade A Samsung lithium-ion cell specified at 10,400mAh, which should be good for 500 charges. The Lumsing Power Bank never got any more than warm in our tests, and Lumsing says it’s been designed to avoid overcharging and short circuiting, overcurrent and overvoltage.

How many times you can charge each of your gadgets depends on their own battery capacities. As a guide, Lumsing says you’ll be able to charge an iPhone four- to five times, a Samsung Galaxy smartphone three times, and an iPad once. With phones that have lower-capacity batteries you could get as many as five or six charges.

If you’re away from the mains for a few days, that’s a lot of very useful portable power, and it puts battery cases such as Space Packs from Mophie – able to charge your device up to 80 percent – firmly in the shade.

More useful still is the fact the Lumsing has two USB outputs, so you can charge two devices simultaneously. The first output is specified at 1A, while the second 2.1A output offers a faster charge. A power button is found to the right of these outputs, along with four blue LEDs to show the Lumsing Power Bank’s remaining charge. When it’s empty, you simply recharge the Power Bank via Micro-USB.

A USB- to Micro-USB cable is supplied in the box, but you’ll need to provide your own USB- to Lightning or other proprietary cables for other devices.

Also read our tips on how to improve smartphone battery life.