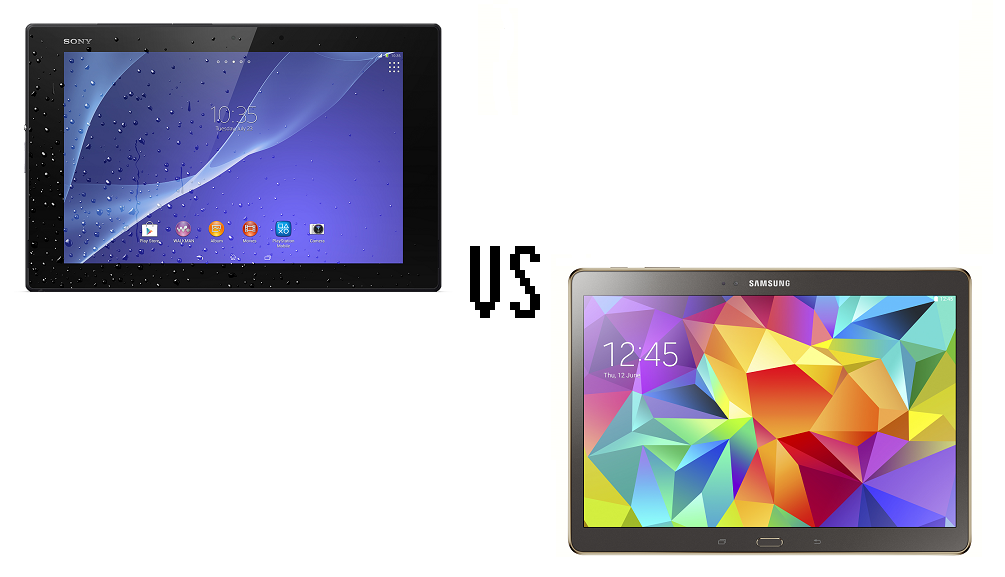 These are undoubtedly two of the best 10in tablets money can buy and it’s a very close call. However, for the same amount of money you’ll get a higher-resolution screen and a fingerprint scanner with the Tab S. If these aren’t killer features for you then the Sony Xperia Z2 Tablet won’t disappoint.

If you’re looking for a premium 10in tablet, these are two of the best around. Read on to find out which is the best tablet for you.

You can buy the Sony Xperia Z2 Tablet now, while the Galaxy Tab S 10.5 will go on sale in the UK on 4 July.

Both manufacturers focus on how thin and light their tablets are and before we even look at the specs, they are two of the most svelt models on the market.

Samsung has done a great job and managed to make the Galaxy Tab S 10.5 just 6.6 mm thick but hasn’t out done the Xperia Z2 Tablet’s 6.4 mm. Unless you want bragging rights, this is really no different.

On the weighing scales, the Xperia wins again at 439 g; the Galaxy Tab S 10.5 is a little heavier at 465 g. This is a bigger difference than the thickness but still pretty minimal.

You get a choice of ‘Dazzling White’ or ‘Titanium Bronze’ with Samsung, and the Sony comes in simple black or white.

A key element in the design stakes is that the Xperia Z2 Tablet is dust- and waterproof (to a rating of IP55 and IP58 respectively). Although Samsung has managed similar on the Galaxy S5 smartphone, the Galaxy Tab S 10.5 doesn’t have this feature.

Samsung’s tablet may not be dunkable in water but it impresses when it comes to display technology. The Galaxy Tab S 10.5 has, as you can imagine, has a 10.5in screen size while the Xperia Z2 Tablet uses the more traditional 10.1in. This is a small difference compared to the other elements.

The Galaxy Tab S 10.5 has a resolution of 2560 x 1600 (WQVGA), creating a pixel density of 287ppi means that everything looks nice and crisp. Samsung’s SuperAMOLED technology ensures punchy and bright colours, too, although things can get a little over the top at times. It also has an adaptive display mode which aims to adjust the display’s gamma, saturation and sharpness depending on the content you’re viewing.

The Xperia Z2 Tablet has a lower but still decent resolution of 1920 x 1200 resulting in a pixel density of 224ppi. Rivalling Samsung’s AMOLED tech is Sony’s own Triluminos and Live Colour LED. The latter is new and does a great job of increasing colour depth and gradation.

Both tablets offer excellent boldness and richness in colour and image quality but Samsung wins here with that extra resolution. That doesn’t mean the viewing experience on the Sony tablet is bad, though and you won’t be disappointed if you go there.

The Tab S 10.5 uses Samsung’s Exynos 5 Octa-core processor, or a Qualcomm Snapdragon 800 depending on where you live (Samsung says the octa-core model will arrive in the UK). There’s a generous 3GB of RAM and the typical choice of 16 or 32GB internal storage.

Meanwhile, the Sony Xperia Z2 Tablet uses a Qualcomm Snapdragon 801 quad-core processor clocked at 2.3GHz. It also has 3GB of RAM and the same storage options as its rivals.

With up-to-date chipsets, both offer excellent performance and there’s nothing to choose between them from a user perspective if you ask us.

You can add additional storage by way of a microSD card as both tablets have a slot. However, the Galaxy Tab S 10.5 can accept twice the capacity at 128GB.

While both tablets feature NFC, 11ac Wi-Fi and IR Blasters for changing the channel on your TV, Samsung adds a fingerprint scanner to the list which you won’t find elsewhere. It’s the same one as the Galaxy S5 and resides in the physical home button.

If you use cameras on tablets then you’re getting some decent hardware either way. Both have 8Mp rear facing cameras although Samsung provides an LED flash which Sony does not. At the front are 2.2Mp (Sony) and 2.1Mp (Samsung) so barely a difference. Each will record video in up to Full HD 1080p resolution.

Things are similar on the software side since both the Galaxy Tab S 10.5 and Sony Xperia Z1 Tablet run Android 4.4.2 KitKat. However, Samsung offers its latest TouchWiz interface while Sony has its own – both mirror their smartphone counterparts but on a larger screen.

This is where personal taste is a big factor so there’s no real point in declaring a winner. What we can point out is that Sony’s interface is closer to vanilla Android. It keeps things simple and stylish while adding useful widgets and Sony’s own apps like Walkman. TouchWiz, on the other hand, is far more customised with additional home screen which are a little like adverts and additional features such as Kids Mode, SideSync and side-by-side app multi-tasking.