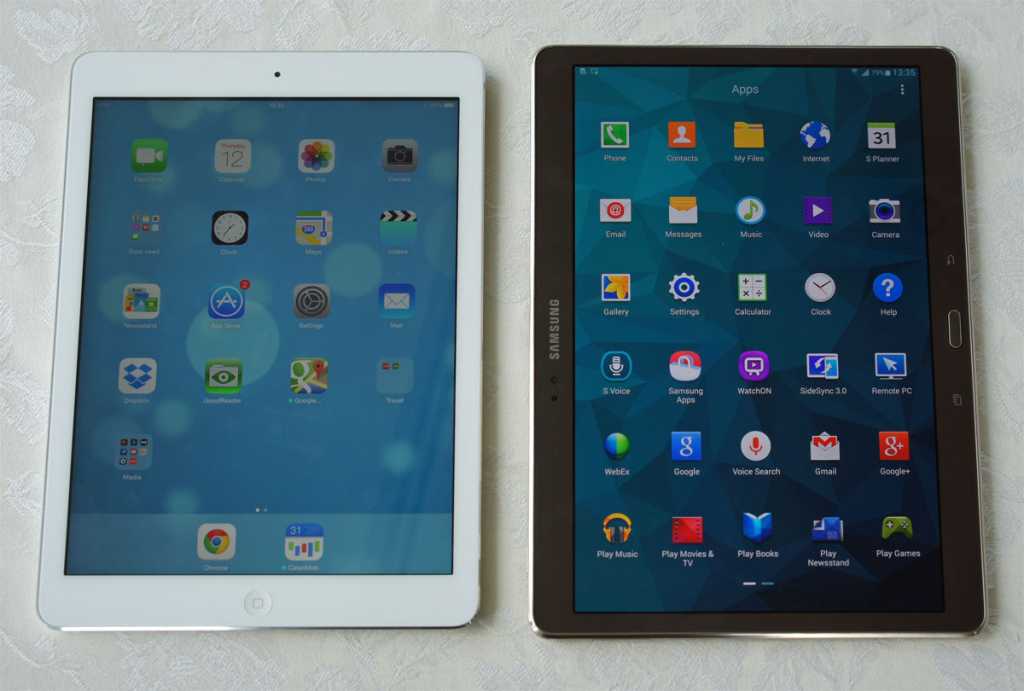 It’s too early to say which tablet is the best, as we still need to test performance, battery life and camera quality among other things. It’s clear that the Tab S 10.5 is a strong rival to the iPad Air, but for those who own other Apple products the iPad Air may remain the obvious choice.

NOTE: We’ve had only a limited amount of hands-on time with the Galaxy Tab S 10.5, so we can’t yet provide a complete comparison of these two tablets. Treat this review as our initial thoughts, which we’ll update as soon as we’ve had time to properly test the newcomer’s performance – including its battery life.

The iPad Air starts (as every 9.7in iPad so far has) at £399. That’s for the 16GB Wi-Fi only version, and don’t forget that you don’t get built-in GPS unless you buy a 4G/LTE model, which costs £100 more than the equivalent Wi-Fi only version.

The Galaxy Tab S 10.5 also starts at £399, which is for the 16GB Wi-Fi only version, but this does have built-in GPS, regardless of whether you buy the LTE model or not. We’re led to believe LTE models will be £100 more expensive than the Wi-Fi-only equivalent. The Tab S also has a few other tricks, which we’ll get to now. Also see: 25 best tablets of 2014.

The Tab S will go on sale in the UK on July 4th.

Samsung hasn’t deviated too much from previous Galaxy Tab design, but it’s impressive how thin the Tab S is. Samsung claims 6.6mm, while the iPad Air is thicker at 7.5mm.

You get a choice of ‘Dazzling White’ or ‘Titanium Bronze’, and the iPad comes in Silver or Space Grey.

The Tab S has a physical home button and two touch-sensitive buttons, with stereo speakers mounted on the side. The rear is made from dimpled plastic, which is noticeably inferior to the iPad’s aluminium. We thought the Bronze version looked more upmarket than white, and both look less plasticky than the Galaxy S5.

This is where things get interesting, as Samsung is extremely proud of the Tab S’s 10.5in screen. It uses Super AMOLED technology, and has a resolution of 2560 x 1600 (WQVGA). A pixel density of 280ppi means that everything looks nice and crisp, and the 16:10 aspect ratio is normal for an Android tablet. See also:  Best Android tablets: here’s where we bring to you the 22 best Android tablets in the UK right now.

An adaptive display mode aims to adjust the display’s gamma, saturation and sharpness depending on the content, or you can select which mode you want to use.

In terms of numbers, the Tab S wins, but whether that extra screen real-estate and those pixels make it a better tablet is debatable. On the one hand, yes, a bigger screen is better for some things, but on the other, the iPad Air is just that bit smaller.

Samsung has done well, though, to keep the Tab S’s overall dimensions down – it’s a desirable tablet.

The Tab S 10.5 uses Samsung’s Exynos 5 Octa-core processor, or a Qualcomm Snapdragon 800 depending on where in the world you buy it. There’s 3GB of RAM. Storage-wise, it’s either 16 or 32GB, but with the option of expanding via microSD up to 128GB.

The iPad Air has Apple’s A7 chip, but Apple doesn’t quote clock speeds or RAM. Storage options range from 16 to 128GB, and there’s no changing the storage once you’ve purchased.

The Tab S has an IR blaster and fingerprint scanner – both taken from the Galaxy S5 – and both features which the iPad lacks.

It’s fairly safe to say that the Tab S wins here. The iPad also lacks the slo-mo effect which was bestowed only on the iPhone 5S.

The iPad Air runs iOS 7 (soon to be iOS 8). The winner here is down to personal preference of course.

It’s too early to say which tablet is the best, as we still need to test performance, battery life and camera quality among other things.

It’s clear that the Tab S 10.5 is a strong rival to the iPad Air, but for those who own other Apple products the iPad Air may remain the obvious choice.