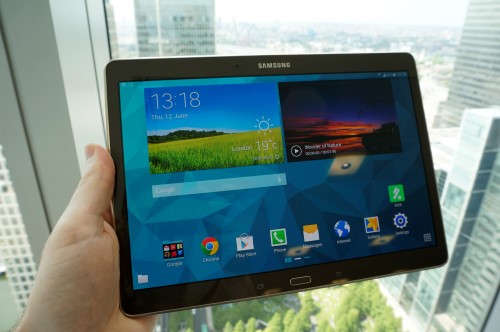 The Samsung Galaxy Tab S 10.5 is one of the firm’s best ever tablets with a thin and light design, although there is still too much plastic. Hardware is decent, namely that impressive display and great battery life making this a consumption machine. It’s got pretty much everything you could want on a tablet, and it is priced competitively against its key rivals earning it a recommended award.

There are two models of the new Galaxy Tab S range, an 8in model and a larger 10in model. Bucking the usual 10.1in trend, it has a 10.5in screen. Both will launch in two colours: ‘Dazzling White’ and ‘Titanium Bronze’.

The Samsung Galaxy Tab S 10.5 will be released on 4 July at £399, matching the price of key rivals the iPad Air and Sony Xperia Z2 Tablet. Also see: 25 best tablets.

It’s no surprise that the Galaxy Tab S looks much like Samsung’s previous tablets but it does have new styling points which match up with the Galaxy S5 smartphone. That means it has a dimpled plastic rear cover, a physical home button and a pair of touch sensitive keys.

The back feels cheap as we’ve become accustomed to with Samsung devices but it is in stark contrast to the nice metal finish edge which on the white model is a stylish bronze/copper colour.

You’ll notice that on the back are two odd looking circles which work with Samsung’s Book Cover. Instead of using magnets, the accessory clips onto the tablet and doesn’t come off unless you pull hard. It’s available in different colours and allows you to tilt the tablet into four different viewing positions.

Two key design aspects are how thin and light the Galaxy Tab S is. It’s just 6.6mm thick according to Samsung (we didn’t take our callipers to the event) which is thinner than the  iPad Air but not quite as petit as the Sony Xperia Z2 Tablet. At 465g, it’s nice and light for a tablet with a large screen – it’s easy enough to hold it one handed for a reasonable amount of time. That’s lighter than the iPad Air but Sony’s tablet is an even lighter option.

Although is shares some design language with the Galaxy S5, the tablet is not dust or waterproof so do go taking it into the bath or paddling pool with you. The Xperia Z2 Tablet is your best choice for dunkable tablets but the Tab S has some other tricks up its sleeve which you won’t find elsewhere so read on to find out what it’s got.

Samsung is pushing the content consumption capabilities of the Galaxy Tab S as the firm says that 50 percent of tablet owners use their tablet for watching or reading content. Samsung goes as far as claiming the Tab S has the ‘world’s greatest screen’ for a tablet.

As we’ve said, a 10.5in is a decent size and a 16:10 aspect ratio means that the device is great for watching TV shows, as it’s almost the same as a widescreen TV. The resolution is extremely high at 2560 x 1600 (WQVGA). A pixel density of 280ppi means that the display is stunningly crisp.

Samsung is, as usual, proud of its Super AMOLED technology which does make content look great but, as we’ve found in the past, can be a bit over the top making things look fake. An adaptive display mode aims to adjust the display’s gamma, saturation and sharpness depending on the content, or you can select which mode you want to use.

Since the tablet is all about the viewing experience, it’s nice to see stereo speakers (although they are side mounted). They hold up fairly well for most situations – YouTube videos etc – but you won’t get the best experience if you watch a feather length movie.

As a flagship device, the Galaxy Tab S 10.5 is packed with technology so there’s an IR blaster and fingerprint scanner – both taken from the Galaxy S5 and are features you rarely find on a tablet, especially the latter of the two. Although it takes a lot from Samsung’s flagship smartphone, there’s no heart rate monitor.

As you’d expect, it also comes with plenty of other tech such as 11ac Wi-Fi, Bluetooth 4.0 and GPS – there’s no NFC, though. If you want data on the go wireless hotspot, a 4G LTE model will be available for roughly an extra £100.

You’ll be able to opt for either 16- or 32GB storage capacities and there’s a microSD card slot for adding up to 128GB more. A generous 3GB of RAM is accompanied by Samsung’s Exynos 5 Octa processor with four 1.9GHz cores and four 1.3GHz cores.

This means the more powerful cores take on demanding work while the other four save power when  things are idling or simple. It’s a powerful chip and this was reflected in our benchmark scores as the Galaxy Tab S managed 2769 points in Geekbench 3 (a few points more than the Xperia Z2 Tablet). It was also very close to its Sony rival in the web browsing SunSpider test at 1079ms.

On the graphics side of things the Galaxy Tab S underperformed with a framerate of just 14fps in the GFXBench T-Rex test – the Xperia Z2 Tablet recorded a fantastic 27fps. In the demanding Manhattan test, Samsung’s latest tablet managed a paltry 2.9fps.

Unfortunately, this kind of performance isn’t reserved for benchmarks. We’ve found the Galaxy Tab S 10.5 surprisingly laggy at times when not even giving the device plenty to do. Luckily these occasions only happened every now and then so most users will find the device responsive. Just be wary of playing intensive games on it.

For all you tablet photographers out there, the Galaxy Tab S 10.5 has an 8Mp rear facing camera with an LED flash and a 2.1Mp front facing camera. They are some of the best around in the tablet market and the main camera is even aided by an LED flash. 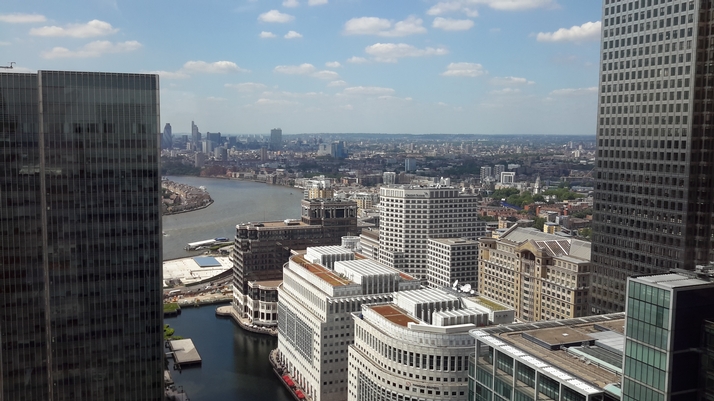 Here is a test photo from the main camera. Click to enlarge.

On the software front, it’s no surprise that the Galaxy Tab S 10.5 is running Android 4.4.2 KitKat with Samsung’s latest TouchWiz software. It looks just the Galaxy S5 interface since it uses the same icons, widgets and drop down notification bar.

TouchWiz is still not our favourite of the manufacturer interfaces but there are things you can do to improve it, like changing the wallpapers, arranging the widgets etc. However, you can’t change the look and feel of areas like multi-tasking, settings and the notification bar.

We do like the way recent apps pops up at the bottom of the screen rather than taking over completely and you can swipe in from the right side of the screen to access the decent Multi-window feature which lets you run two apps side-by-side.

Another handy item is SideSync 3.0, although it’s only useful if you have a compatible Samsung smartphone. If you do you can use the tablet to respond to things like calls and text messages.

New additions include Samsung’s own Kick app – a football app which is almost in time for the World Cup and provides in-depth data and stats on players and teams. It also features the latest scores and information while games are in progress. There’s also Papergarden, which is Samsung’s latest digital magazine service.

What we don’t like is the way the Magazine UX only makes complete sense if you use the built-in email and calendar apps. If you use Google’s which you probably do, then nothing will appear there.  There’s also the fact you cannot remove it. As standard there are two panels but you must leave at least one.

The Galaxy Tab S is a brilliant tablet for battery life with a very large 7900 mAh capacity inside, although you can’t remove it like most of Samsung’s smartphones.

Untouched, the device will last a really long time as it holds its charge extremely well. When you do use it, it doesn’t jump off a cliff like a brainless lemming either. When watching video on the device, you’ll get about 12 hours of playback. This is an average, as it depends on how bright you set that super high res screen. You’ll get less if you ramp it up but even more at lower levels.

Either way, it’s a great performer in this area and means the Galaxy Tab S is a good choice for those wanting to travel without their tablet dying on them half way through a flight or a car journey where the tablet is entertaining kids in the back.