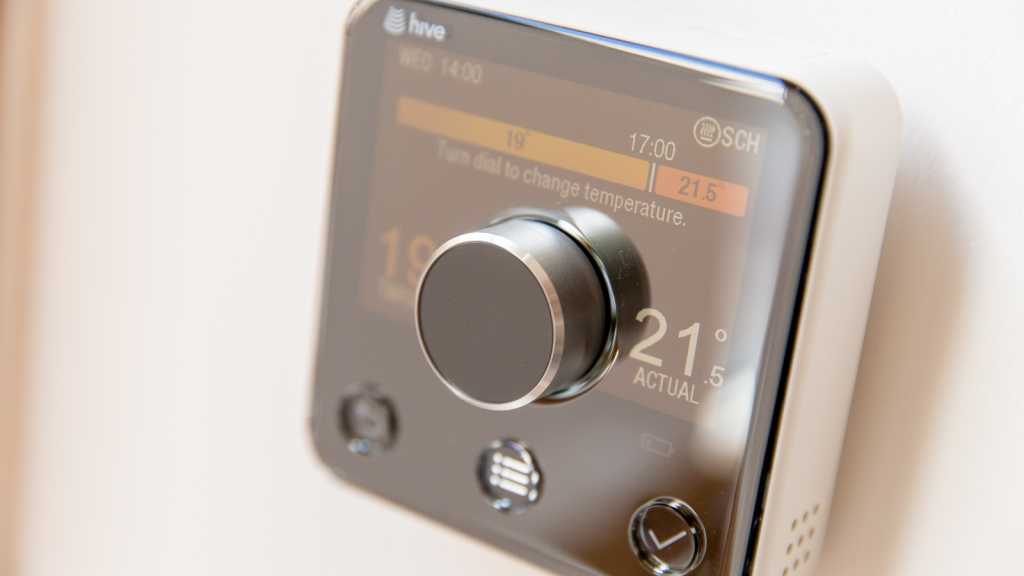 This second iteration of Hive is a giant leap forward from the solid (but somewhat dull) first-generation product. The interfaces of both the app and thermostat are intuitive and quick to use. There are clearly energy savings which Hive can help you make and you can quickly recoup your expenditure if you’re conservative with your temperatures and schedule.

Hive, Nest and others have been putting a lot of energy into a heated battle in the smart thermostat arena. We’ve reviewed all the best smart thermostats and we look at Hive Active Heating 2 with support for multizone.

Historically thermostats were small, uninspiring boxes installed by a plumber, set to 21 degrees and largely forgotten. But whichever Hive employee said “Hive needs a world class designer” and hired the external team at FuseProject (led by Yves Béhar) deserves a promotion. Hive is one of the best-looking smart thermostats around – they should never be hidden; they are a piece of art and simply demand to be admired. When inactive it has a glass mirror-like surface; touching the dial illuminates the device with space-age controls. Hive is actually a whole smart home system with security cameras and smart lights, not just a thermostat. So do read our Hive Active Light and Hive View reviews.

We’re reviewing Active Heating 2 in the UK. It’s unfortunately no longer available in the US. The price in the UK is very much dependent on your existing heating system and how many zone controllers you want or need. It’s cheaper to self-install but realistically for most people it isn’t worth the hassle. You’ll find the single-zone kit for £279 at Hive Home.

* Installation should only be undertaken by a qualified professional, Hive says.

Just about anyone with a boiler can have Hive installed. It’s designed to be used with gas and LPG central heating systems and works with normal radiators as well as boiler-fired wet underfloor heating. See the Hive Compatibility list to see if yours is compatible. Until recently Hive could only manage a single heating zone and if you had a hot water cylinder it could also control its schedule.

With the addition of multizone support Hive can now easily manage larger and more complex heating systems. For the vast majority of homes it won’t be an issue but it’s important to note that Hive can currently control a maximum of three heating zones plus hot water. 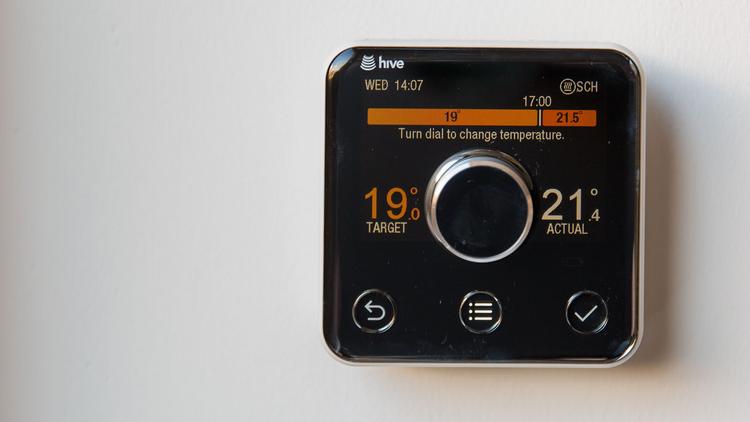 If you just have one heating zone in your house then Hive can happily take control. However, a common misunderstanding is that you can improve your heating system by getting a multizone thermostat. But thermostats alone won’t make your house multizone – you need to already have valves that separately control the water flow to different areas (often this would be a downstairs and upstairs configuration). If you are very lucky you may be able to alter your plumbing and split it into zones but that can be very costly and it could take years to recoup the expense, and saving money is the main reason to have a zoned system.

You can normally tell how many zones you have by counting your existing thermostats, so two thermostats is likely two zones. There are competitors to Hive that make an exception to the rule by using smart thermostatic values on each radiator. If you’ve got deep pockets and don’t want to re-plumb to multizone then see our review of the Honeywell Evohome or Heat Genius.

Although it’s fairly straightforward to do a self-install (as long as you are competent with mains wiring) most people will opt for an engineer install. This is where British Gas clearly shines. Not only does it make the product, but also has the telephone support and systems to give good back up and an army of full-qualified engineers waiting to quickly and painlessly fit your system. In the unlikely event that you buy Hive with install and your system isn’t compatible then you’ll get a full refund, so there’s no risk of even a wasted call-out fee. 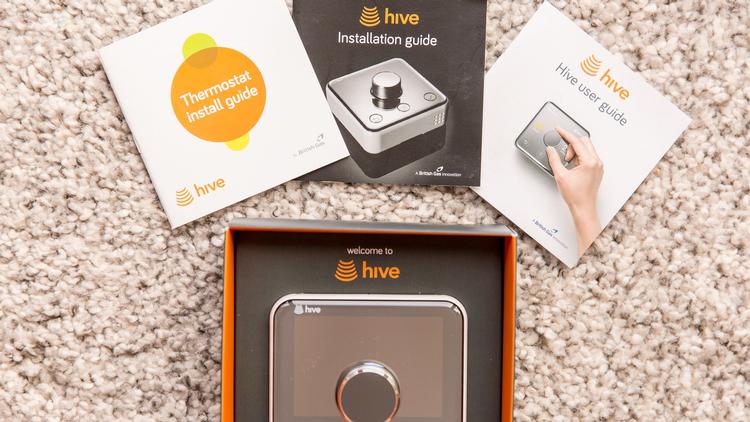 In advance of the booked installation we received our login details for Hive and, as the day approached, helpful automated text reminders to ensure we hadn’t forgotten the appointment. The installer turned up promptly and was very knowledgeable. He had to unwire the old main controller and then replace the valve controllers (three heating and one hot water). We had expected there would be one or two glitches or hiccups or something interesting to report… but it just went in and worked. In less than two hours the whole installation was complete, including removing the old thermostats from the walls and replacing them with the sumptuous Hive thermostats. 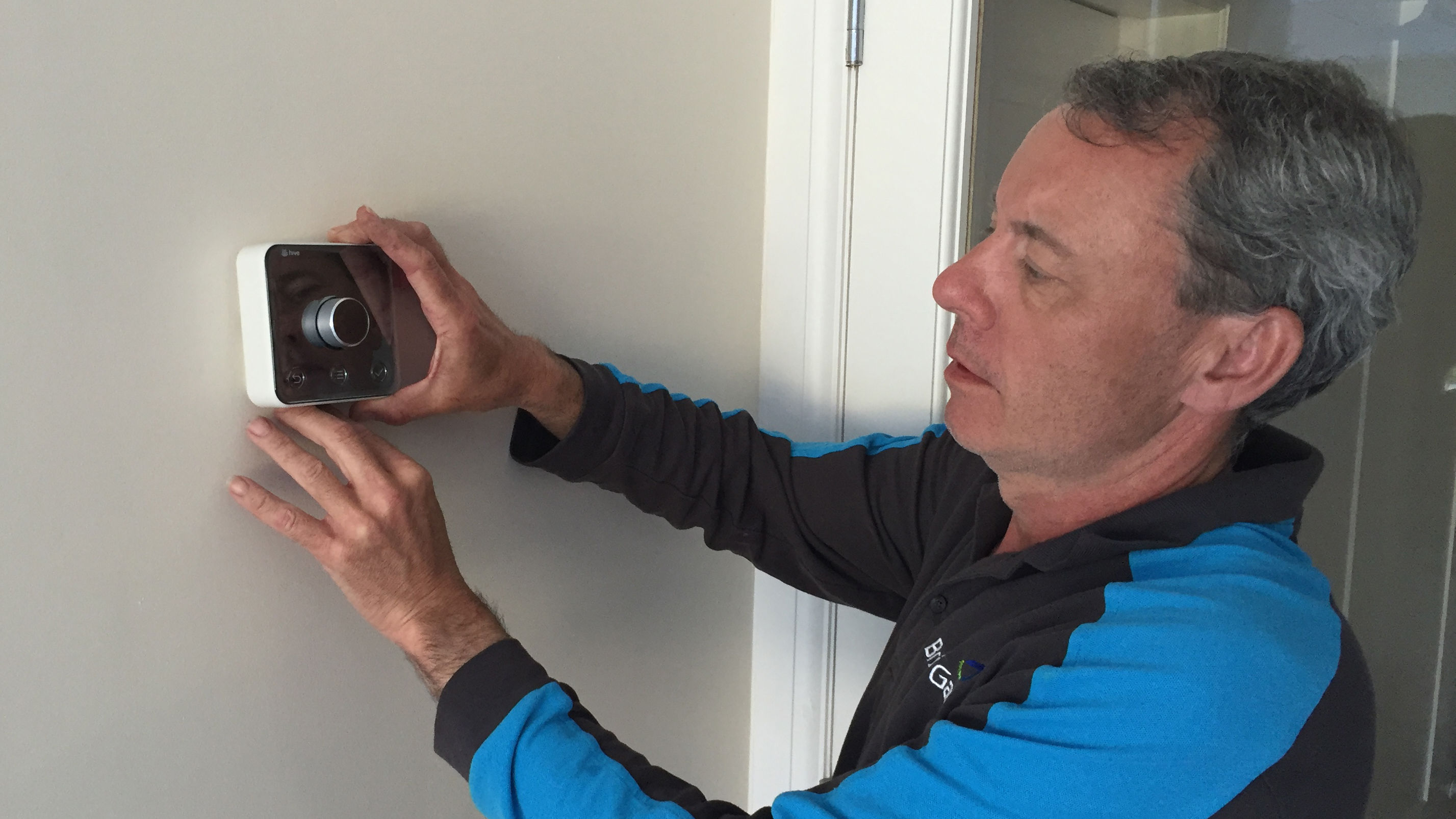 One of the benefits is that the thermostats communicate wirelessly and are battery powered. So you don’t have to worry about trying to locate them near a mains socket (which you do with some others, such as Nest). However, unlike Nest, each Hive thermostat needs to be installed permanently in one place and not moved around. With a ‘roving’ thermostat, you can take it with you so the temperature is always correct for the room you’re in.

There’s nearly always a risk of a bit of cosmetic damage when removing old thermostats from the walls (especially if they have been painted around) but in our case the new ones perfectly covered over the existing site. One tip is that if you aren’t 100 percent sure where you want your thermostat sited then you can easily mount it using Command Strips (enabling damage free mounting and removal – no more screw holes or redecorating). The exact size required comes in pack ‘Command 17043’.

By default the thermostat has a subtle cream surround but if you want to accessorise it to colour match (or contrast) with the wall it’s on, then a range of 12 colour surrounds is available.

We were guided through setting up the app and programming the schedules. It was so intuitive it really didn’t need much explanation. 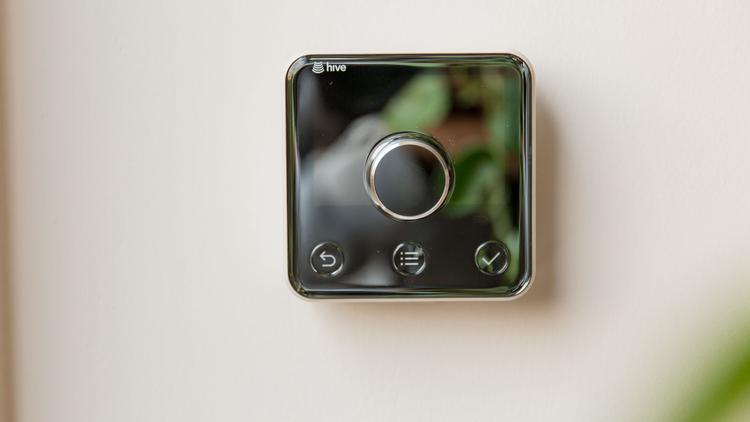 The thermostats provide easy control of your heating and water, let you set schedules, apply a heating or hot water ‘boost’, enable holiday mode and, of course, adjust the zone temperature. The interface is very well designed and large enough that the main features are very readable. Each thermostat is responsible for a single zone and one thermostat also controls the hot water. It’s a slight niggle (in multizone systems) that you can’t boost the hot water from any of the thermostats. This can get somewhat confusing as as all of them have two buttons on the top – one to boost heating, the other to boost water.

Large numbers tell you the current temperature and the temperature the heating is set to. You can adjust the set temperature by simply swiping up or down on the screen at any time.

When in the Off position, the system automatically goes into a frost-protection mode. If the temperature inside dips below 5 degrees, the heating will turn on to prevent pipes from freezing.

The schedule section has a 7 day, 24 hour schedule already pre-set, but you can easily tweak this to suit your lifestyle. This is possible via the thermostat, but more fun with the web app’s large, colourful and easy to understand controls.

The thermostats are good enough that they could be installed in a house and used very happily as the sole control system. Most people, though, will want to install the app on their phone.

The Hive app makes using your heating system enjoyable (almost fun) and aims to save money. It’s available for Android and iOS.

You can also use the Hive website from a PC or laptop:

You can manage your Hive devices from the website as well. The app will show you whether the hub, receiver and thermostat are connected to each other, their signal strength and their power or battery status. 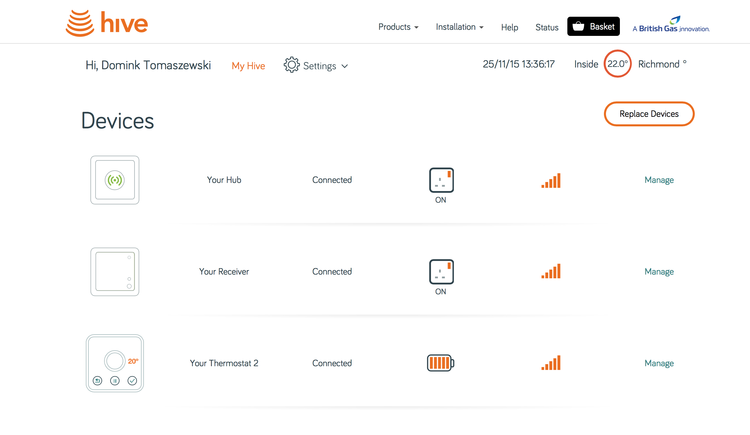 Wherever you are (as long as you have internet connection) you can tweak your heating settings. However, our testers commented that prior to having Hive installed, if they felt chilly while watching TV they often pulled on a blanket but now they just instantly boost the heating from the sofa. In fact, where before only one person in the household knew how to program the heating controller, now everyone can tweak it at will. In a situation where previously the house was permanently set to an eco-friendly 19 degrees the introduction of any smart thermostat has the potential to increase the bills. In reality, most people will see real cost savings which, over time, should more than cover the purchase and installation cost.

Another benefit of the app is that you could help out senior relatives (who also have Hive installed) by monitoring the settings remotely and setting up alerts instantly informing you if they get too cold. You can set-up a PIN lock which will prevent others, for example kids who share your smartphone, from changing the Hive’s settings. 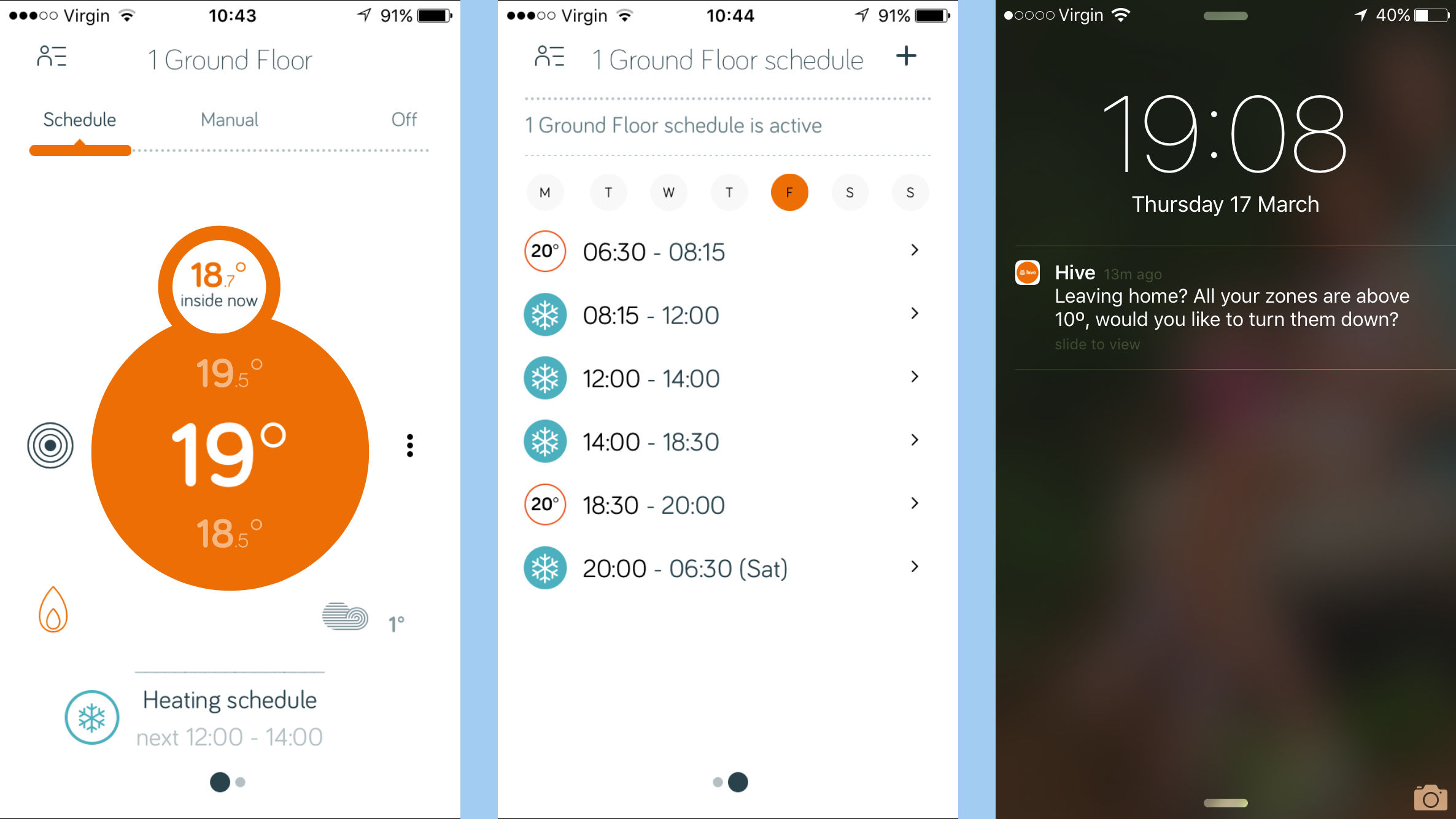 It’s worth clarifying that Hive is a schedule-based heating system. It doesn’t try to second guess when you might want your heating turned on based upon your recent activity. This has some benefits as the user knows what to expect.

Users of some other smart systems which do ‘intelligently’ work out your schedules have reported unpredictable behaviour. Being multizone enables the heating of only the relevant zones (thereby saving you money). So the bedrooms might only heat late in the evening and the early morning, whereas a lounge zone might be on in the evenings. We’d like to see an option to enable some flexibility in the schedule, whereby you can set it to have the room at 21 degrees from a set time until an off time. The system could then learn how long it takes to heat each zone and, taking into consideration the external temperature, adjust on and off times to maintain a temperature across your set time period. So if you want the heating at 21 degrees until 11pm, the boiler could turn off at 10.30pm. Other systems already support this and we like it.

However, Hive can make use of your phone’s GPS to monitor where you are and alert you to turn off and on the heating as you leave and return. Ideally, we’d like to see this automated. You can change the distance of these ‘Trigger areas’. 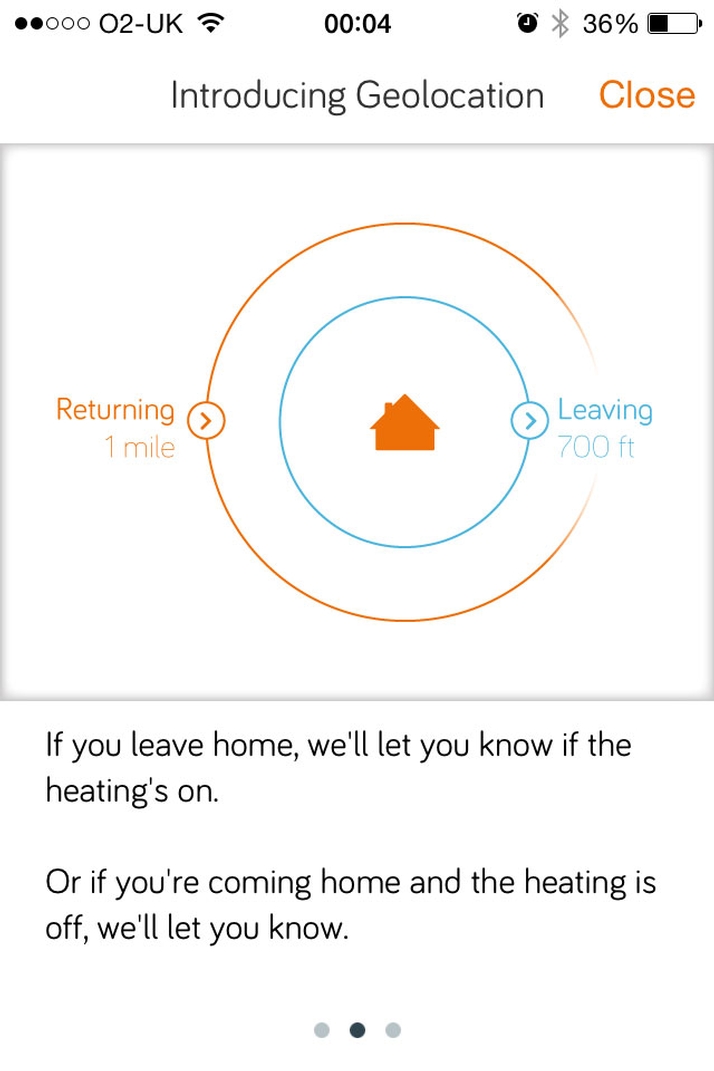 You can also set up notifications which will alert you when the temperature reaches a specified level.

If you don’t have a smartphone, or it isn’t an iPhone or Android, then you can enable Text control, which allows the system to be controlled by sending a text message. 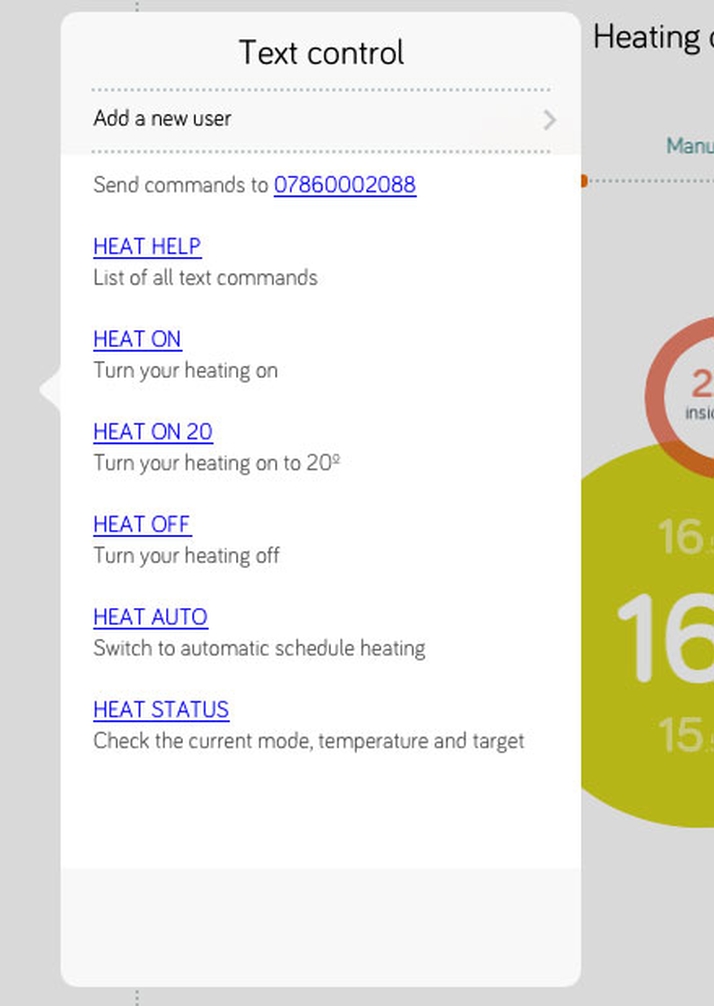 Holiday Mode will automatically lower the temperature in your home for the time you are away, and it will increase it back to your normally set temperature just before you arrive back. All you need to do is simply set the dates you are leaving and coming back. 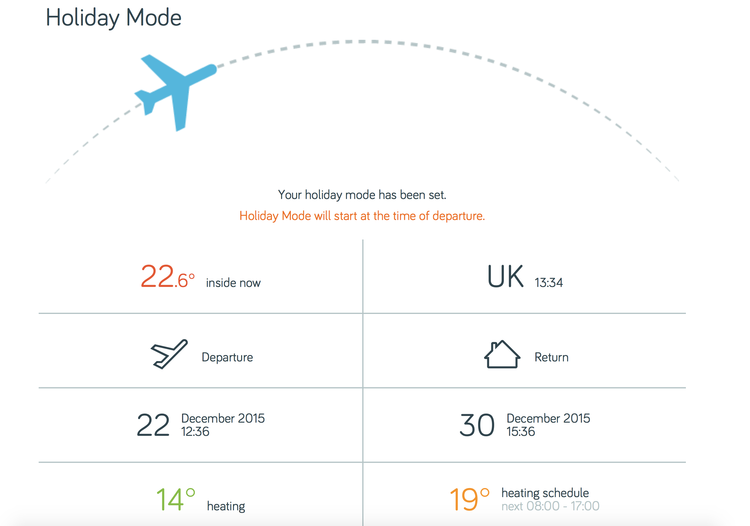 These are great additions to the system and further add to Hive’s mass user appeal. 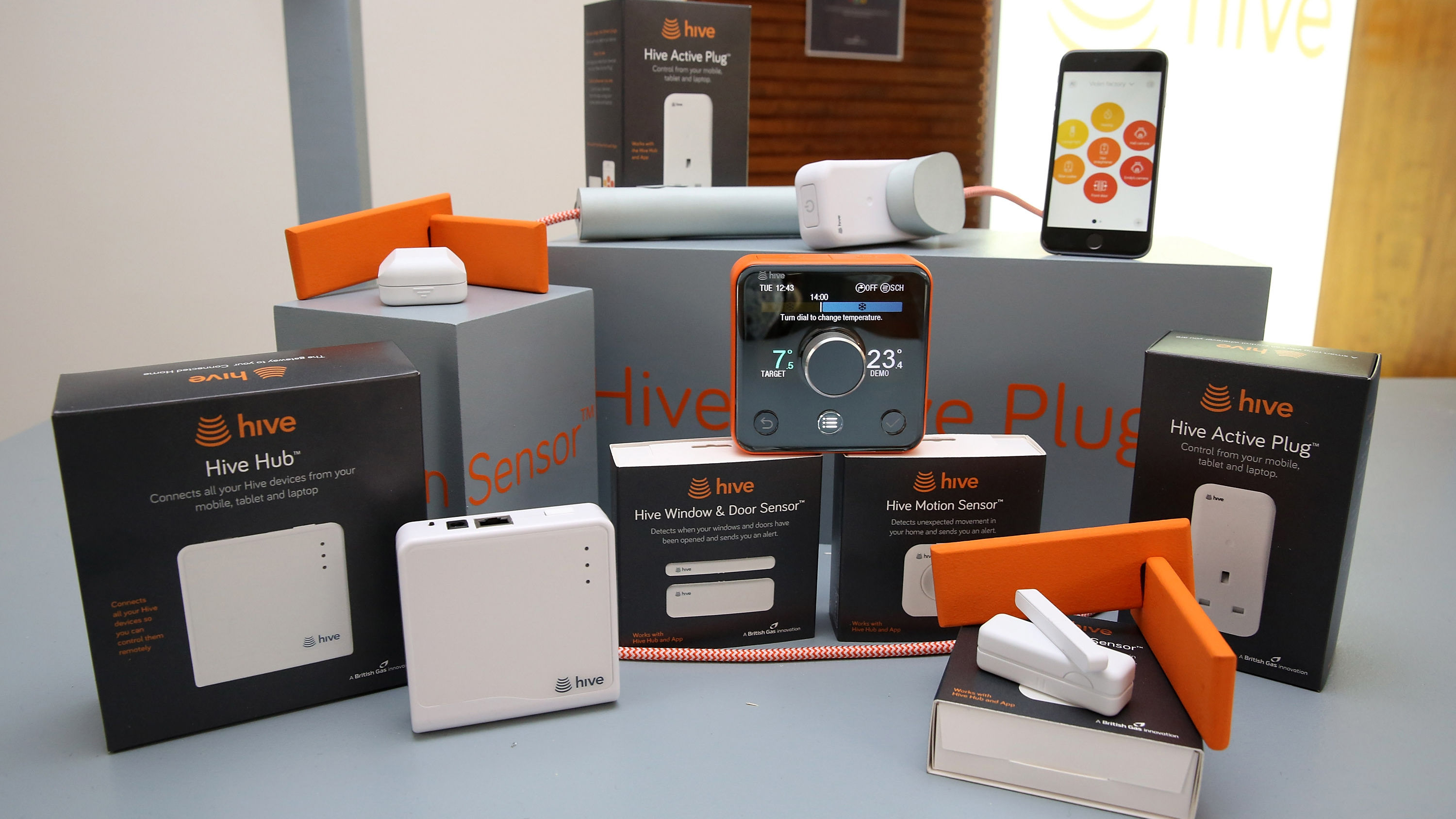 As with anything you connect to the internet there are potential security flaws and the possibility of a bug rendering your heating system out of control. We’re pleased to report that we haven’t experienced any problems with Hive. But this isn’t purely theoretical, at the start of 2016 a software bug in Nest left many users shivering in the cold and without heating until a fix was announced. There have also been several demonstrations of hacking Nest thermostats but so far all have required an initial physical access to the device. No smart thermostat can guarantee to be immune from such problems but it wouldn’t deter us from recommending a reputable system like Hive.

See also: Hive vs Nest: which is best? and Tado smart thermostat review.