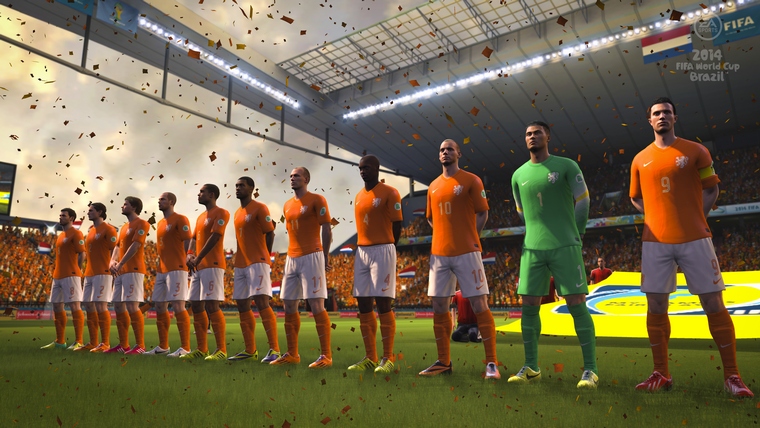 Solid game play with all the teams and players you could wish to find from World Football, 2014 Fifa World Cup Brazil is a colourful and fun game to play. Existing FIFA fans may be reluctant to shell out an additional 30 quid for World Cup bells and whistles, but if it is a World Cup SIM you want, this is it.

If you live under a rock it may have escaped your notice, but the already football-obsessed world is about to get even more soccer crazy. Tonight the 2014 World Cup kicks off in Brazil. Thirty-two nations will begin battling it out to be crowned world champions of the beautiful game, and everywhere you look people will be celebrating a festival of sport and international relations by going down the pub and getting hammered. Or buying a huge telly (and then going down the pub and getting hammered). Read: FIFA 15 release date, price, editions and new features.

I’m here to tell you that there is a third way – a less expensive and a less-injurious-to-your-health way of enjoying the Cup De Monde. And it’s interactive, too. (To get the full viewing experience, read How to watch the World Cup online.)

Because inbetween dodging allegations of corruption in the World Cup-bidding process, the game’s governing body FIFA has brought out a brand new soccer SIM for Xbox 360 and PlayStation 3. (Well, EA Sports made the game, I don’t think Sepp Blatter is much of a coder.) It is: 2014 FIFA World Cup Brazil. Enjoy the World Cup by sitting in a darkened room eating Doritos and getting angry with your console playing this World-Cup themed football game.

If you are under the age of 40, you like football, and you have ever owned a console, you know the score. There are really only two footie SIMs worth playing (face facts ‘This Is Football’). These are ‘Pro Evo’ (aka ISS) and FIFA. Traditionally FIFA was generally regarded as having the less realistic and -convincing game play, but as the name suggests it had the licences – the right to use the correct kits, player names and team names.

Pipe down FIFA fans: these days the gap is pretty much closed in terms of gameplay. And in 2014 FIFA World Cup Brazil EA offers more than 200 national teams for you to lead along the road to Rio. Naturally, due to the lead in time the squads aren’t entirely accurate. Roy Hodgson can’t sling on Andy Carroll and pump the ball into the mixer as England chase a late result, but you can.

EA has gone to town on the things that FIFA has always done well. There are new crowd scenes, banners, flags and shots of fans going crazy in the pub back home (seriously). Of course all the official stadiums are present, and then there is the commentary. Ah, the commentary. Suffice to say that if you get annoyed with ITV’s coverage of the actual football, the commentary may well grate. I think that means it is accurate, if not enjoyable. (See also: PS4 vs Xbox One review: Next-gen games console comparison.)

FIFA was already pretty good where it counts: gameplay. Long gone are memories of playing FIFA 2000 and being able to score perfect goals at will. 2014 Fifa World Cup Brazil takes the gameplay of the latest annual release and, basically, doesn’t mess with a good thing.

There are two changes that we could see (let us know if you notice more), and both of them are good. For one thing it is no longer too easy to score with too powerful headers. In fact getting a decent cross over and then knocking it in with your virtual bonce is particularly tricky in this game. And that’s a good thing.

We also like the fact that you can no longer guarantee getting in on goal with a chipped through ball. Defenders seem to have gotten their virtual brains around this particular tactic, which is a step forward from the most recent release.

We also like the introduciton of over the back headers. Indeed one of the best things about 2014 Fifa World Cup Brazil is that overall gameplay is good. It feels physical, niggly and difficult to do well. Like football, in fact.

We also like the World Cup format. There is sufficient depth in the tournament modes, with the full squads of all those national teams. Enter into a tournament and the opposition, injuries, suspensions and formations all feel like live considerations. Your progress takes on a momentum of its own just like that of your favourite team in a good World Cup.

Of course, the flip side of the ‘nothing new’ approach to gameplay is that existing FIFA player/owners may feel cheated. I’m not sure I would want to pony up for this game if I already owned the most recent FIFA release. Indeed, it’s not so different from FIFA 13.

As to the tournament mode, we could live without the mandatory training, mid tournament. What a pain. I will never be able to teach Gary Cahill to pass accurately over a long distance: don’t make me waste gaming time attemptoing to do so.

It actually took me a while to work out that I had to train the team. Menus and navigation are painfully poor in this game. Gameplay is the most important thing, of course, but would it have killed them to employ someone to finesse the menu UI?

Finally, it’s a personal thing but I found the crowd shots and the commentary the wrong side of cheesy. I don’t need to see and hear my avatar fans booing when I concede a goal. And it doesn’t add to any sense of virtual reality.