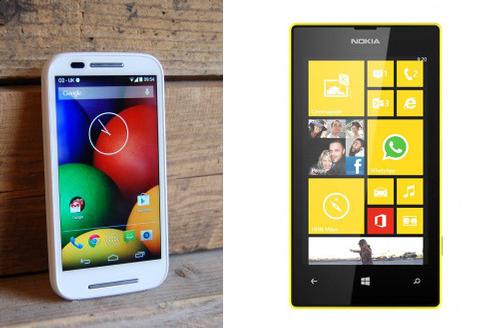 There is little to choose between the Moto E and the Lumia 520. Indeed, the chief thing to note is that these are both great handsets at a remarkably low price. The Lumia 520 is thinner and lighter, and comes in multiple colours. The Moto E is marginally cheaper and more powerful. And it has a bigger, better display. You will make your own choice, but for us the combination of that display and the greater flexibility of Android makes us choose the Moto E.

The easiest place to start comparing two budget smartphones is to look at their prices. When compared to almost any other phone the Lumia 520 comes out cheaper with SIM-free prices starting at £108. A quick sweep of the usual online stores tells us that today you could pick up one from Dabs for £108 and eBuyer for £107, for instance. Shop around on PAYG and you could pick up a Lumia 520 for as little as £79. It’s incredibly good value, but the Moto E manages to sneak under even this low barrier.

The 520’s build is a touch plasticky and you’ll be constantly wiping away greasy fingerprints. But it is solid, and you won’t need a case to prevent scratches, however.

Rounded corners and sides mean the Nokia Lumia 520 fits comfortably in a single hand. One-handed operation is easy here. There is a removable rear panel which is useful, but it doesn’t creak or flex under pressure. It measures just 64×9.9×119.99mm and 124g with a 4in screen.

In common with its Lumia siblings you can quickly and easily snap off the 520’s colourful rear cover and swap in another: yellow, cyan, red, white and black fascias are available.

All fit neatly over the handset’s various hardware buttons and ports: there’s a 3.5mm audio jack on top, a volume rocker, power switch and dedicated camera button on the right side, and a Micro-USB port on the bottom. On the rear is a 5Mp camera and a small slot for the speaker. Our sample came in red, giving it a fresh, playful look that’s miles apart from the multiple boring black Androids dominating the market.

One of the nice things about the Lumia 520 being smaller than many current touchscreen smartphones is that it makes it feel more comfortable in use as a phone.

The Moto E looks like the Moto G, with a curved rear cover and an edge-to-edge display with only a small amount of a bezel on either side. The look is simple and uncomplicated, and it is sometimes difficult to remember which way up the device goes because of its symmetrical shape. It’s slightly odd that the ear piece at the top is smaller than the combined mic and speaker at the bottom.

Motorola has decided to offer both a black and white facia with the interchangeable shells other cases for the rear. The Moto Shell for the Moto E will come in nine different colours.

Although the rear cover does come off, you can’t access the battery. You need to remove the rear cover only to insert or remove your SIM- or memory card. For just £89, the Moto E is well built and feels a fair bit more expensive than the price tag suggests it will. It’s very much the feeling we get from the Moto G, so well done Motorola.

Both the Moto E’s and the Lumia 520’s displays will impress all but the most demanding phone consumers.

Take the Lumia 520: at this price it is hard to find fault with a 4in panel that has a resolution rated at 800×480-pixel. This equates to a pixel density of 235ppi. That’s not even close to the size or sharpness of top-of-the-range handsets such as the LG G3 or the HTC One M8, but it’s really not the point. Those handsets cost four or five times the price of the Lumia 520. And here’s what the makers and marketers of those phones won’t tell you: there’s absolutely nothing wrong with 235ppi. You can definitely tell the difference when viewing photos on the Lumia 520 as opposed to the top end handsets, but that doesn’t make the experience bad on the Lumia. In fact we found images rich and vibrant, and text cleanly defined.

The Moto E’s screen is bigger, at 4.3in compared to 4in. It has a higher resolution, too. qHD (540×960) on a phone this cheap is a rather impressive feature and means a pixel density of 256ppi. Like the Lumia 520’s this is a bright, colourful and sharp display. Not the best, but the best value for money. We’ll call this one a draw. (See also: The UK’s 24 best Android smartphones of 2014.)

The Nokia Lumia 520 comes with a 1GHz Qualcomm Snapdragon S4 dual-core processor with 512MB RAM. It’s hardly a world-beater, but it’s enough to power this relatively lightweight budget phone. Windows Phone is very easy on hardware and we didn’t experience any noticeable lag when flicking around the phone, the only delays we did experience were when opening the camera or third-party apps, and even then the delay was only a few seconds.

At that mega low price, it’s no surprise that the Moto E also has a relatively lightweight spec. However, you might be surprised at what you get for your money.

Under the covers is a Qualcomm Snapdragon 200 chip, a 1.2GHz dual-core processor which is coupled with 1GB of RAM. Handling graphics is an Adreno 302, a 400MHz single-core GPU according to Motorola’s spec sheet. Performance is generally very good. You do get the occasional sign of lag, but most of the time the Moto E is smooth and can switch between apps quickly. Part of the performance is down to the fact Motorola keeps things as simple as possible on the software front with stock Android. When customised Android can be laggy, but not in this instance.

Web browsing is quite jerky and the phone takes a couple of seconds to zoom in when you double tap. Moving onto graphics and the Moto E surprised us with 11fps in the T-Rex GFXBench test which is just shy of the far more expensive Huawei Ascend P7 and the same result as the Moto G. In the extremely demanding Manhattan test, the Moto E managed to match last year’s flagship HTC One with 5fps.

These are both good value smartphones in terms of performance and spec, but we’d edge toward the Moto E being the better performer. See also: What’s the best Windows phone?

The Lumia 520 comes with 8GB of onboard memory. Not a lot, but there is an SD card slot via which you can add a 64GB memory card.

With the Moto E there’s just 4GB of internal storage which isn’t much at all but pretty standard for a really cheap phone. When you consider the operating system, there’s about 1.5GB free for apps, games and media. However, Motorola has made sure that users can add more by way of a microSD card slot which can handle up to 32GB. It would be wise to order a memory card with the phone.

That is a pretty clear victory for Nokia, however.

In the Nokia Lumia 520 corner is a 5 Mp rear-racing camera, with no LED flash and no front-facing camera at all – video is recorded at 720p @ 30 fps. We took a few snaps with the Lumia 520 and it fared reasonably, with good focus and slightly washed-out but relatively true colours.

Switch over to the Moto E and there’s no front facing camera but at the rear is a 5Mp camera. The Moto E takes reasonable photos and videos but only in good conditions and even then, they’re nothing special.

It’s impressive that the phone has an HDR mode – which is on auto by default. There’s also a panorama mode but little else to mention of in the basic camera app which takes a photo when you touch the screen. However, you can switch on a mode which gives you a bracket which can be dragged around the screen to choose the focus point.

We couldn’t honestly say that either of these is a good smartphone camera. Let’s call it a draw and say no more about it.

The Lumia 520’s OS and software are a bit of an acquired taste. The Windows Phone 8 platform is a complete change to what iOS and Android offer the mobile world. Windows Phone 8 presents you with two screens to control your smartphone with; first is a tiled Modern UI interface, which looks pretty cool, the second is an alphabetical list of all the phones apps/programs.

Previous experiments have shown the majority new users having difficulty navigating their way around a Window Phone 8 device, compared to Android and iOS smartphones. That said, once you get you head around the layout, using a Windows Phone 8 device isn’t an issue at all. And indeed Windows Phone users tend to love Windows Phone.

Perhaps the most significant in terms of software here is that the Windows Phone 8 app store is lagging behind Android, and this is a huge issue for smartphone consumers. It’s worth bearing in mind that all the mainstream apps – Facebook, Twitter, Whatsapp, Skype – are available on WP8. These days it is hard to make the argument that Windows Phone lacks important apps and, like Android, it offers multiple ways to source and purchase music, movies and books.

Motorola prides itself on giving uses the latest software, so it’s no surprise that the Moto E comes pre-loaded with 4.4 KitKat.

It’s important to note that Motorola is guaranteeing an upgrade to the next major version of Android for the Moto E. Motorola’s T&Cs state “The device will receive at least one software update to bring it up to date with the current KitKat 4.4.3 operating system.” Motorola keeps things simple on the software front with a plain version of KitKat. As usual it does include some of its own software but the firm doesn’t go over the top. This is great and keeps things nice and simple for users, providing a sort of blank canvas.

The Moto E comes with existing Motorola apps such as Motorola Migrate, Motorola Assist, the firm’s camera software and an FM radio app.

A new app, which will be exclusive on the Moto E initially, is Motorola Alert. This can let people know you’ve arrived safely somewhere, you can use it to help meet a friend and there’s an emergency mode for, well, emergencies. It could be handy for some users but isn’t exactly a deal breaker for us.

Ultimately you will make your own choice, and it will be in large part subjective. We like both Windows Phone 8 and Android KitKat.

There is little to choose between the Moto E and the Lumia 520. Indeed, the chief thing to note is that these are both great handsets at a remarkably low price. The Lumia 520 is thinner and lighter, and comes in multiple colours. The Moto E is marginally cheaper and more powerful. And it has a bigger, better display. You will make your own choice, but for us the combination of that display and the greater flexibility of Android makes us choose the Moto E. (See also: 27 best smartphones: The best phone you can buy in 2014.)