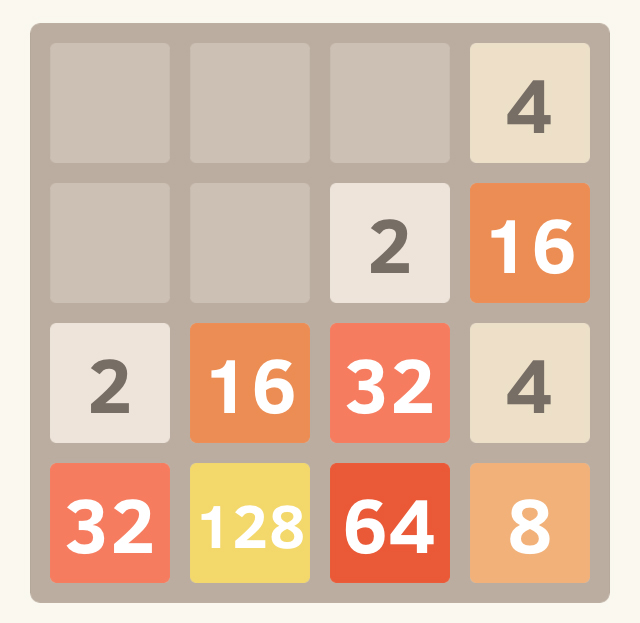 Overall, we love 2048. It’s the perfect time-waster, and is so addictive you’ll find yourself playing it in every spare minute you get.

2048 has skyrocketed to the top of the charts in the iOS and Android app stores, and there’s a good reason why: it’s ridiculously addictive. It’s a simple and fun but completely infuriating puzzle game that was originally conceived by independent developers Sirvo for its Threes! Game, but has since been cloned and reproduced across various platforms.

The reason for the huge number of clones of this game (there’s even a Flappy 2048 now) is that it runs on open-source code, meaning any developer can take and adapt it. The most popular version of 2048 on iOS comes from developer Ketchapp, while on Android the developer of the most popular version is Estoty Entertainment Lab. The main gameplay of both is exactly the same, but they do differ when you start changing modes so we’ll talk a little bit about each below. See: How to win 2048

Let’s start by talking about the classic, main gameplay that both the Android and iOS versions of 2048 have in common.

The aim of the game is to get the 2048 tile, which is certainly no easy feat. You’ll start with some low tiles like 2s and 4s, which you can slide in any direction (but not diagonally). When two tiles of the same number touch, they’ll join to form one tile with a higher number created by adding the two numbers together. So two 4 tiles make an 8, two 8 tiles make a 16 and so on.

You need to continue merging the tiles until you get that all-important 2048 tile, which will win you the game. But the catch is that every time you move your tiles, even if you don’t manage to merge any in that move, a 2 or 4 tile will appear on the grid. Run out of space and it’ll be game over.

The app will keep track of your best score so you can see how much you’re improving, and there’s a leaderboard that’ll let you see how well you’re doing in comparison with your friends if you log in with social media.

There’s really nothing bad I can say about this game. I myself have become completely addicted to it, and enjoy wasting away the time on my commute home attempting to get that elusive tile (and beyond, which you can by the way).

On both the Android and iOS versions, I found the (very similar) interface to be easy on the eyes and perfectly intuitive, enabling me to concentrate on the game without getting distracted. They’re both free, so you’ll spot some ads here and there (as you can see in this screenshot), but thankfully I hardly noticed. 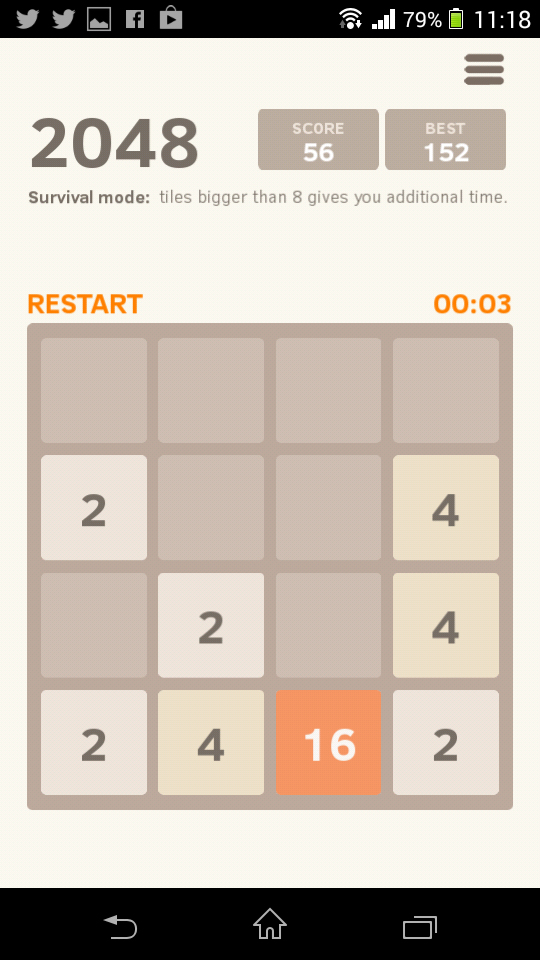 I’ll start by talking about the modes in the iOS version of 2048, as there’s only one. By tapping Menu and then swiping to the right, you’ll find the Challenges mode. I should warn you now, they are VERY hard. I’m stuck on Challenge 6 but I’m still determined to beat it, even though I’ve tried more times than I care to think about (I told you it was addictive).

In each challenge, you’re tasked with collecting a selection of tiles and you’ll have a set number of moves to get them in. It’s nice to be able to take a break from the main gameplay if you’re struggling and have a go at the Challenges. There are currently a total of 48 Challenges so that should keep you going for a while.

Now for the Android version, which has three additional modes to choose from: X-Tile, Survival and Practice.

In X-Tile mode, there’s this annoying tile that can be moved but can’t be summed, so it adds an interesting new obstacle to the challenge of getting that 2048 tile.

Survival mode (shown right) involves a timer, which is rather fun but so, so hard. You start with 15 seconds on the clock, and each time you merge two tiles with a value of 8 or higher, you’ll get an additional 2 seconds. This one’s for when you’re feeling really ambitious.

Practice mode gives you a total of 20 undos, so if you find you’ve made a horrible mistake you can go back and change it. This’ll set you up nicely for Classic mode when you’re a bit more confident about getting that 2048 tile.

It’s just a shame that its success stems from the hard work the team behind Threes!, so if you’re against playing these clones and would prefer to give credit to the original creators of the game, read our sister title Macworld’s review of Threes! here.