First things first: these are two outstanding portable computers. If you can afford it and it makes sense to you to carry only one device that is PC, tablet and laptop, the Surface Pro 3 is a truly stunning achievement. But if you need more of a ‘proper’ laptop and you can live without touchscreen and camera, head for the MacBook Air.

Surface Pro 3 vs MacBook Air comparison: why compare a tablet and a laptop?

There is another cost associated with Surface Pro 3 – the keyboard cover. If you want to use this device instead of a laptop such as MacBook Air you really do need to invest in either the Type cover. And that will cost you £109, in addition to the tablet itself. 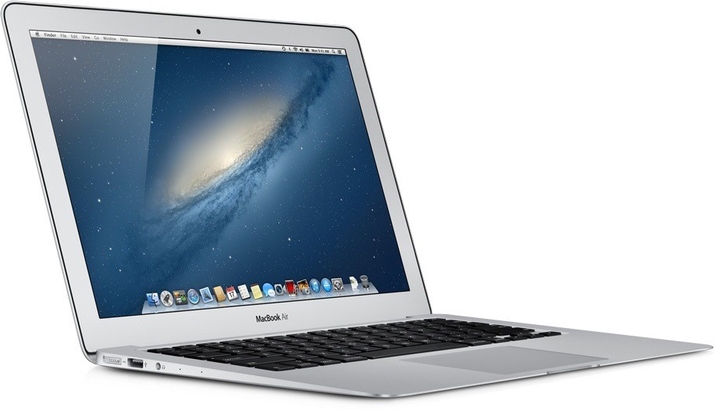 All of which puts the MacBook Air squarely in the middle of the Surface Pro 3’s pricing spectrum. You can get a 12in Surface Pro, with 64GB storage and a Type keyboard cover for £748 inc VAT – a whole £1 cheaper than the 11in MacBook Air with a similar amount of storage. You get what you pay for, and both these devices are priced fairly, if not cheaply. (See also: Surface Pro 3 review: can Microsoft’s Surface Pro 3 really replace your laptop?)

Our colleague Agam Shah spent some time with the Surface Pro 3, and wrote: “I found the tablet faster, thinner and lighter than previous Surface Pro models, and the larger 12in screen makes for comfortable reading and viewing. In a PC market desperate for innovation, the Surface Pro 3 stands big among the hybrid laptop-tablet models from other device makers.” 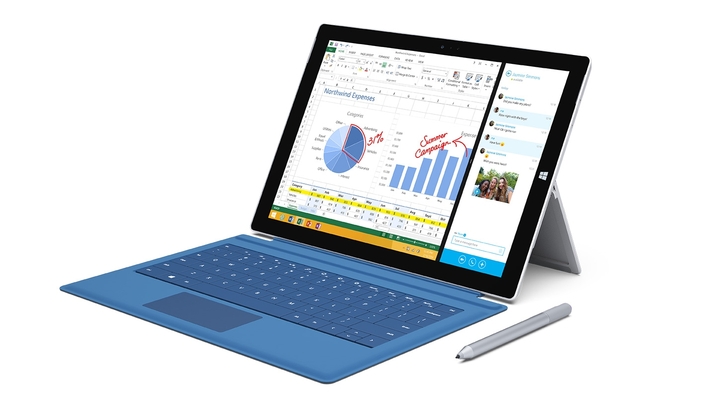 “The tablet’s usability as a PC comes alive with the detachable Type Cover, a hard keyboard attachment that magnetically secures itself under the screen. The earlier Surface Pro Type Covers, which attaches to the bottom of the tablet, are prone to detaching easily when you’re typing on your lap. Microsoft said the new Type Covers have a 70 percent larger trackpad and more ‘stability’ features, but the scrolling experience seems similar to that of the older tablets,” said Shah.

There’s a new clickable Surface Pen, too, although Shah suggests that it is “rather large and clunky”, and requires a AAAA battery. One click lets you activate the pen and start jotting down a note in OneNote, even while the Surface Pro is asleep; a double-click snaps a screenshot and saves it to OneNote.

Overall the Surface Pro 3 is a triumph of engineering. It packs into a thin, light, slick and desirable case a full-spec power PC. The build is mostly metallic, and Surface Pro 3 is put together beautifully. Of course, this paragraph could easily have been written about the MacBook Air.

The Apple backlit keyboard now so widely copied by others is improved over earlier unibody MacBooks, such that light bleed through the sides of keys is greatly reduced. And that keyboard is one of the best in the business, with very short travel keys that we found made typing comfortable and nearly effortless.

The Apple MacBook Air sports the same supreme all-metal build quality that we’ve yet to see surpassed in other brands’ laptops, styled with a wedged taper from rear to front edge. Despite Apple’s reputation for assembling premium products at premium prices, we’ve not seen any Microsoft hardware partner match the features, build and attention to detail, either at the same price or higher.

The MacBook Air weighs in at a very light 1.35 kg – but that is positively huge compared to the Surface Pro 3 at 800g. Similarly it’s still 1.7 cm at the thickest point, as against the 0.9cm of Surface Pro. 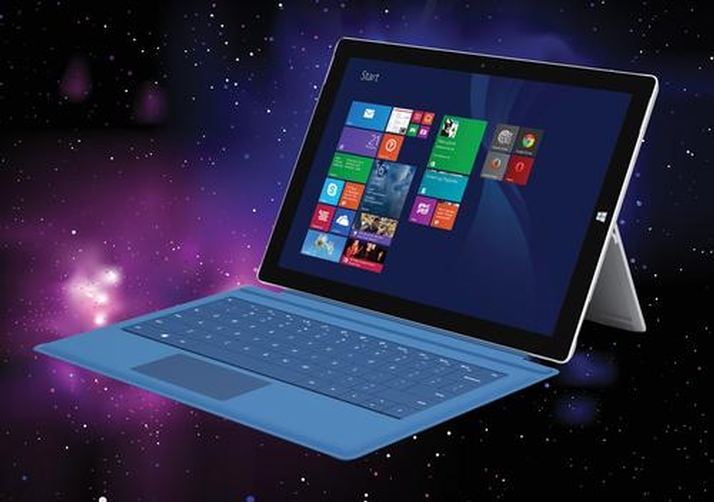 “The screen is bright and lively, displaying images at a resolution of 2160×1440 pixels – that seems an odd shift away from the regular 2560×1440 pixel screens adopted for laptops and monitors,” said Shah. However, he also noted that “The touchscreen is more responsive than the Surface Pro 2, which is less sensitive to pressure.”

Don’t be fooled, though, for a laptop display the MacBook Air’s is a most good-looking, sharp and bright screen. Given the choice we’d choose the Surface Pro 3’s – not least because of the touchscreen – but you are unlikely to regret choosing either of these devices for the display. See also: MacBook Pro vs MacBook Air comparison review: Apple laptop buying advice.

The Surface Pro 3 is available in models with Intel Haswell (fourth-gen) Core i3, i5 and i7 processors, with up to 8GB of RAM and 512GB of flash storage. This means, although the higher-spec models may be more expensive in comparison, they are just as powerful as any laptop on the market, and most desktop PCs. Microsoft also claims the Surface Pro 3 is 10 percent faster than the Surface Pro 2 (if that matters to you).

During the launch demonstration the Surface Pro 3 was shown running full-blown desktop Adobe Photoshop, and its inclusion of the full version of Windows 8.1 Pro means there’s full support for Office and you can install any legacy Windows app or Modern UI app you like.

The model we spent time with had a 2.5GHz Intel Core i5-4300 processor, a 256GB SSD and 8GB of DDR3 RAM. “The tablet booted in seconds and loaded applications faster than my current laptop with an Intel Ivy Bridge processor,” noted Shah. We haven’t yet had time to properly benchmark the Surface Pro 3.

We have rigorously tested the MacBook Air Air, however. The previous Mid-2012 MacBook Air with its 1.8 GHz Intel Core i5-3427U reaped 4497 points in this general test of computer speed and responsiveness. This Mid-2013 version with its lowly 1.3 GHz Intel Core i5-4250U scored 4602 points, suggesting a modest but measurable 2.3% boost in overall performance.

It’s worth noting that this dual-core chip still includes Hyper Threading too, to process four concurrent threads, and will also dynamically overclock to twice its rated speed, 2.6 GHz in Turbo mode. While Intel talks of its Core i-Series chips’ baseline speed and their Turbo peak speed, one could also view this processor as a 2.6 GHz part that runs predominantly underclocked at half its baseline speed.

Since PCMark 7 also measures the speed of storage as part of the test suite, this better-for-less result could also be attributed to the upgrade in flash memory. There’s now 128 GB as standard across both 11.6in and 13.3in models, and importantly this takes a new form-factor that bypasses any SATA bus. Instead it uses a direct PCIe connection, obviating the intermediary and unneeded SATA stage.

In fact, turning to Geekbench 2 test, we can see that raw processor and memory performance is overall slightly down on last year’s model. The latter averaged 7903 points, while 2013 MacBook Air recorded 6770 points. Memory for this generation and the last is 4GB as standard, configurable to order to 8 GB, and this is now low-power LPDDR3 SDRAM running at 1600 MHz.

MacBook Air is a superfast laptop. All the suggestions are that the Surface Pro 3 is equally adept at running all manner of heavy load computational tasks. If you need a portable PC to do anything, you are unlikely to regret purchasing either of these devices. But the Surface Pro 3 does have the more powerful spec at the top end of the spectrum. (See also: What’s the best laptop you can buy in 2014?)

Microsoft claims a battery life of nine hours when the Surface Pro 3 is used for web browsing. We haven’t had the chance to test this out yet.

Apple seems to have taken several strategies to help eke out more runtime with the Apple MacBook Air (Mid-2013) 13.3in notebook. The larger factor is still almost certainly the shift in Intel processor from third-generation IvyBridge to fourth-generation Haswell.

But unplugged operation is also helped by a slightly larger battery, up 10% in capacity from 49 Wh to 54 Wh, and perhaps the use of low-power memory too.

We put the 2013 MacBook Air to the test in Windows 7 Home Premium, using the venerable MobileMark 2007 (Productivity) benchmark test. And here we recorded a runtime that comfortably exceeded the specified 12 hours, hitting a new record figure of 13 hours and 57 minutes.

Allowing for times when you may be working the machine harder than the MS office and Adobe apps that comprise this test, even an eight-hour stretch between charges means you can yet charge your laptop for the morning, take to work and comfortably last the day without dependence on a mains charger.

Impossible to call this right now, but suffice to say that the MacBook Air is our current Intel battery life champion. The Surface Pro 3 will have to go some to catch it, particularly the more higher spec versions. See also: Group test: what’s the best ultraportable laptop?

All the usual suspects are covered in terms of the Surface Pro 3’s connectivity, except one: 4G LTE. The Surface Pro has no form of cellular connectivity, and Microsoft hasn’t confirmed when or if this will be added. Of course the MacBook Air is in a similar predicament.

Other features include 802.11a/b/g/n/ac Wi-Fi, two 5Mp cameras (front and rear) that can capture full-HD video, a USB 3.0 port, a Mini DisplayPort slot, a microSD card reader and 45 percent louder Dolby-enhanced stereo speakers. An optional docking station expands the port options to include gigabit ethernet, display connectors and USB ports. And there is the digital pen – sold as part of the Surface Pro 3 bundle.

The MacBook Air shares similar connectivity capabilities, with only a 720p webcam for video calls and selfies. It doesn’t have a touchscreen (or digital pen), but it does have a hardware keyboard.

First things first: these are two outstanding portable computers. If you can afford it and it makes sense to you to carry only one device that is PC, tablet and laptop, the Surface Pro 3 is a truly stunning achievement. But if you need more of a ‘proper’ laptop and you can live without touchscreen and camera, head for the MacBook Air. (See also: The 25 best tablets of 2014: What’s the best tablet in the UK right now.)