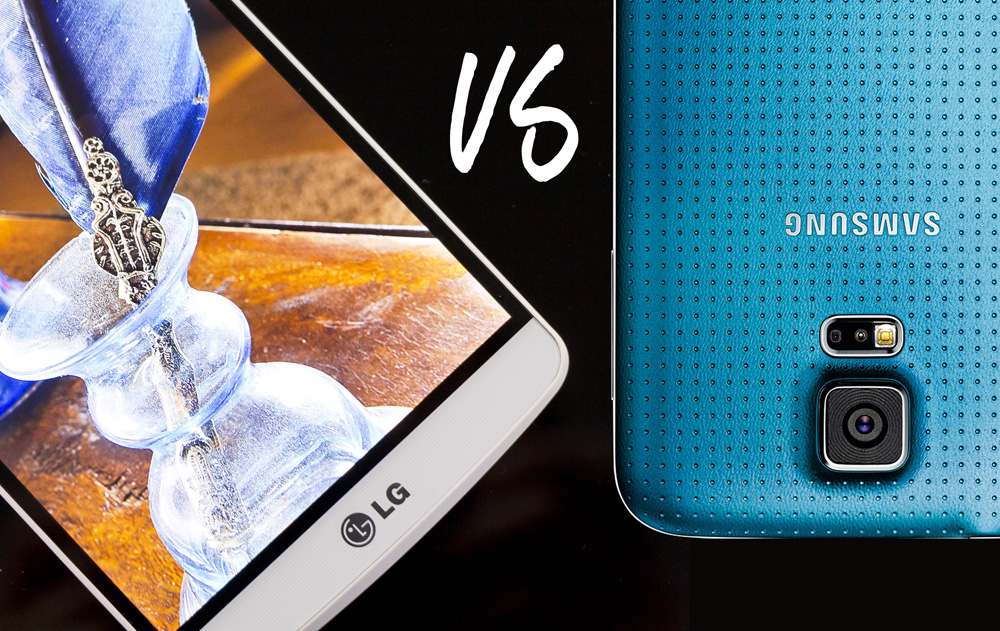 We’d happily own either of these two similarly specified smartphones, but with £90 between them the LG G3 is the more impressive device. Whereas the S5 is a touch faster and offers a fingerprint reader and heart-rate sensor, the G3 boasts a larger, significantly higher-resolution Quad HD display that is quite simply beautiful, plus support for high-resolution audio. We’d much rather watch video, view photos and play games on the G3.

LG’s G3 was one of the most impressive smartphone releases of 2014, while its Samsung rival, the Galaxy S5, was perhaps the most popular. We compare the specs to find out which is the best smartphone. Also see: Best new smartphones coming in 2015.

Read more about the S5 and G3 in our  Samsung Galaxy S5 review and  LG G3 review.

Nearly a year after it first became available, the Samsung Galaxy S5 costs £383 SIM-free at Amazon. LG’s G3 is £90 cheaper, now £293 SIM-free at Amazon. If you’re buying either on a contract it won’t make a lot of difference, of course. At Carphone Warehouse, for example, the S5 is available from £26.50 per month, and the G3 £22.50 per month. However, by buying SIM-free you can make significant savings in the long run (see best SIM-only deals).

Both these handsets are plastic, yet LG has applied a metal-effect skin to the G3’s rear for a touch of class, while Samsung has plumped for a perforated texture that supposedly feels more natural and aids grip in the hand. Neither are as nice in design as, for example, the metal-clad HTC One M8, but both are sufficiently stylish for high-end smartphones. The rear covers on each phone are removable, allowing you to access the also removable battery and microSDXC slot. Also see: Best smartphones 2015 and best Android phones 2015.

While buttons for power and volume are found on the S5’s sides, LG places them on the back of the handset. This seems odd at first, but you quickly get used to it – and KnockCode means you don’t need the power button to turn on and off the screen, you just tap the G3’s display. On the S5 you’ll also find a fingerprint sensor built into the Home button, plus a heart-rate sensor.

Samsung has added IP67-certified dust- and water protection to the S5, allowing it to be submersed in water with no ill effects. You do need to be extra careful that the rear cover and microUSB port cover are securely in place, however. Check out our video of the S5 taking a bath below.

Both handsets are available in black, white and gold; the LG G3 also comes in burgundy red and violet, while the S5 comes in electric blue.

LG shows Samsung who’s boss when it comes to the display. Not only is the G3’s screen larger than that of the S5, at 5.5in versus 5.1in, and without the handset size becoming unwieldy, the resolution is also Quad- rather than full-HD. Indeed, the LG G3 has a staggeringly high pixel density of 534ppi against Samsung’s 432ppi, and at the time made it the ultimate phone on which to watch video, view photos and play games. Even now it has a higher pixel density than rivals such as the Samsung Galaxy Note 4, albeit with a slightly smaller panel. This really is a stunning screen.

The LG employs IPS panel technology, whereas Samsung uses Super AMOLED. Both handsets have very good viewing angles, with the Samsung offering vivid colours that pop and very good contrast, and the G3 majoring on a crystal-clear, true-to-life quality.

Samsung’s screen also uses Smart stay software to prevent the screen switching off when you’re looking at it, while the default Adapt display automatically adjusts elements such as colour gamut, white tone and contrast depending on the amount of available light. We found the S5’s screen is more easily readable outdoors than most, and it’s simple to quickly alter the brightness setting in the notification bar.

The LG G3 is available in 16- and 32GB models with a slightly different spec. The 16GB model matches the spec of the Samsung Galaxy S5, with a 2.5GHz Qualcomm Snapdragon 801 processor, 2GB of RAM and Adreno 330 graphics. The 32GB G3 has 3GB of RAM. Samsung’s S5 is allegedly available in a version that has 32GB of storage (if you can find it), while both handsets employ support for microSDXC, allowing you to add an extra 128GB of storage.

In our benchmarks the Samsung leads on performance, but both are very fast phones (plus Samsung has in the past been accused of using benchmark boosters). In Geekbench 3.0’s multicore test the S5 scored 2869 points against the G3’s 2465. In SunSpider, in which a lower score is best, the S5 recorded 824ms against the G3’s 959ms. Lastly, in GFXBench T-Rex we saw 28fps for the Samsung Galaxy S5 and 23fps for the LG G3. You can compare these scores to all the smartphones we’ve recently tested in our article What’s the fastest smartphone 2014: processor, graphics and web performance compared.

The G2 pleased audiophiles as the first smartphone to come with 24bit/192kHz audio playback, to which LG has now added a 1W speaker with a boost amp to improve sound quality. Unfortunately, the G3’s speaker is rear-facing.

The Galaxy S5 might not support high-res audio, but sound quality is acceptable. Plus Samsung has several software tricks up its sleeve when it comes to audio, including SoundAlive EQ presets, Smart volume (which keeps the volume consistent across tracks), and Adapt sound (which tunes the EQ to the performance of your headphones).

Whereas the Samsung Galaxy S5 packs a 16Mp rear-facing camera, LG doesn’t at first appear to have moved on from last year’s 13Mp snapper. In fact it has made a few tweaks here.

Both Samsung and LG claim to have super-fast autofocus capabilities that can take a photo in around a quarter of a second – faster than you can blink, says LG. However, we found the S5’s Camera app can take a couple of seconds to launch, which can mean you still miss that crucial shot.

Regardless, Samsung has once again tweaked the software to offer a few extra bells and whistles. We like the ability to alter the focus point after a photo has been captured, for example.

Photos shot on the Samsung Galaxy S5, as you can see below, are generally nice and sharp, and among the best we’ve seen from a smartphone, although we did get a few blurry shots. This is something LG aims to prevent with its advanced optical image stabilisation and Touch & Shoot mode.

Below is a test shot from the LG G3, taken on a slightly cloudier day.

The Samsung Galaxy S5 and LG G3 are both able to record 4K-resolution video using their rear cameras, while full-HD video is available from the S5’s 2Mp and G3’s 2.1Mp front cameras. The G3’s front camera is also primed for selfies, with larger pixels and an improved angle, while the screen is able to act as a makeshift flash and a hand gesture can trigger an auto timer.

Whether you choose the LG or Samsung, your phone will come with the latest in connectivity tech. That means 4G LTE (LTE Advanced with the G3), Bluetooth 4.0, GPS, NFC and dual-band 802.11ac Wi-Fi. Samsung also specifies MIMO technology and offers a unique Download Booster that combines the power of 4G LTE and 802.11ac Wi-Fi to deliver downloads at a theoretical max of 400Mb/s.

Samsung and LG are known for cramming in a lot of software into their smartphones, and not much has changed in this regard with these two Android 4.4 KitKat smartphones (both will be upgraded to Android Lollipop).

LG has cleaned up its interface somewhat, colour-coding apps and removing unneccessary visual elements. It also includes such features as KnockCode, with which you can create a custom knocking pattern to wake and unlock the screen, and Smart Notice, which is very much like Google Now, suggesting you switch on Wi-Fi when you get to the office or call back someone from whom you have a missed call, for example. There’s also a new smart keyboard with which you can adjust the size and use gestures to type more quickly and with fewer errors.

Samsung, meanwhile, is often accused of being the king of bloatware, but only Dropbox and Flipboard are preloaded alongside its own and Google’s apps. Plus, while some features are decidedly gimmicky others can be very useful. To go along side its heart-rate monitor is the S Health app, for example. Samsung has also cleaned up its interface, with round icons in the notification bar and settings menu. Its Magazine interface offers a personalised feed from news and social media to the left of the main home screen, and Samsung has also added to the S5 a PIN-controlled Kids’ mode and a Private mode for storing personal content.

Although the LG G3 has a larger-capacity 3000mAh battery than the Samsung’s 2800mAh cell, it also has a larger, higher-resolution screen that you can expect to quickly drain the battery. However, LG claims it has tackled this issue on three fronts: through adaptive framerates, adaptive clocking and adaptive timing control. The LG G3 supports wireless charging, and its battery is removable.

We found the LG G3 will last around two days, even with that Quad HD screen.

Samsung’s battery is also a removable component, giving these two phones an advantage over the competition. We found the Samsung Galaxy S5 would have around two thirds of its battery capacity remaining at the end of a full working day, so should last most users two days.

The S5 also has an Ultra Power Saving mode, which eeks out every bit of life (up to 24 hours) from the last 10 percent of juice by turning off all unneccessary functions and using a greyscale display. LG implements a standard power saving mode in its G3.