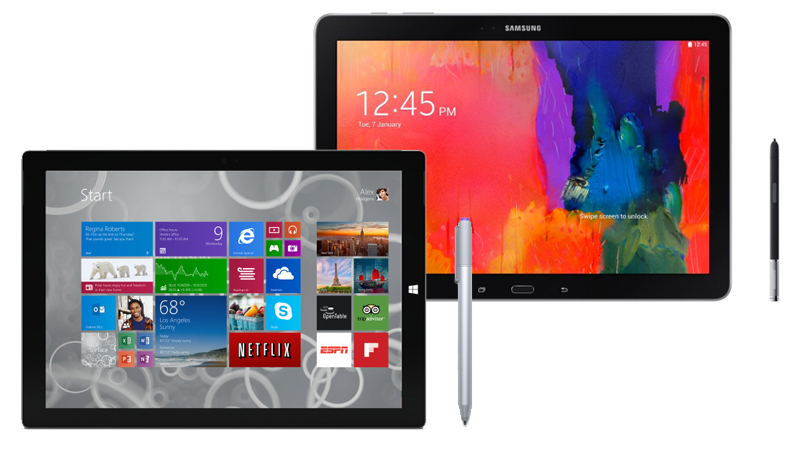 Overall, both the Surface Pro 3 and Galaxy NotePro 12.2 are impressive tablets that offer stunning, big, bright and colourful displays. They’re both ideal for multi-tasking – running more than one app simultaneously, side by side – though you won’t be able to run powerful desktop apps like Photoshop on the Android tablet like you can on the Surface. If you’re simply looking for a tablet with an enormous display, you’ll probably find you’re better off with the NotePro 12.2, but for a device that could potentially replace your laptop completely, it’s the mid- to high-range Surface Pro 3 models you’re after.

The Surface Pro 3 starts at £639 inc VAT, and that’s for the Core i3 version with 64GB of storage and 4GB or RAM. There’s a total of five different configurations available for the Surface Pro 3, with the top-of-the range model (Core i7, 8GB RAM, 512GB storage) costing £1,649 inc VAT.

There is just one option available when buying the Galaxy NotePro 12.2, which has an Octa-Core processor, 3GB RAM and 32GB storage, and will cost you £649 inc VAT.

So it’s actually the Surface Pro 3 that wins on price here, as it starts at £10 less than the NotePro and has closely comparable specs. However, when you start boosting the processor, storage and RAM of the Surface Pro 3, it can prove to be rather costly, but at least you’ve got a variety of options to suit your needs, rather than the one model of Galaxy NotePro 12.2.

As mentioned above, the Galaxy NotePro 12.2 has a slightly bigger display than the Surface Pro 3, though that won’t be overly noticeable in the scheme of things. They’ll both provide enough screen estate to allow you to comfortably work with more than one app side-by-side, which is one of the selling points of both of these tablets.

Despite being similar in size when it comes to the display, the build quality and design of the two tablets is actually quite different.

The Galaxy NotePro 12.2 has a slightly rounded, soft look to it, complete with the Note range’s signature faux leather finish on the back. The Surface Pro 3’s design is squarer, and it has a metallic finish, complete with a handy built-in kickstand on the back, something the NotePro 12.2 lacks, making it more difficult to use due to the sheer size of it (they’re both pretty huge tablets).

Where things get really interesting is the processor and performance of the two tablets. As noted previously in this article, we’ve yet to run our benchmark tests on the Surface Pro 3 so it’s difficult to fully appreciate the power of the device, but we’ll be updating this article as soon as we have test results. For now, though, we can take a look at the impressive kit inside both tablets to give you an idea of what they’re capable of.

Microsoft’s Surface Pro 3 is really a hybrid device, merging the portability and touch features of a tablet with the power and capabilities of a laptop. It features Intel Haswell (fourth-gen) processors, either Core i3, i5 or i7, with up to 8GB of RAM and 512GB of flash storage. This makes the high-end models of the Surface Pro 3 just as powerful as any laptop on the market, and most desktop PCs, though the Surface Pro 3 will work out more expensive.

Plus, as it runs a full version of Windows 8.1 Pro, the Surface Pro 3 will mean you can run familiar desktop applications include Adobe software and the full versions of Office.

Our colleague Agam Shah spent some time with a Surface Pro 3 with a 2.5GHx Intel Core i5-4300 processor, a 256GB SSD and 8GB of DDR3 RAM. “The tablet booted in seconds and loaded applications faster than my current laptop with an Intel Ivy Bridge processor,” Shah noted.

Meanwhile, the Samsung Galaxy NotePro 12.2 has a split Octa-Core processor on-board to manage both simple and heavy-duty tasks, with 3GB RAM. It has 32GB of memory, but includes a MicroSD slot to allow you to add up to 64GB.

We ran some benchmark tests on the NotePro 12.2, though they should be used as a general guide only. GeekBench 3 score of 919 for the single core test (lower than the iPad Air’s 1487 points) and 2700 for the multi-core test (almost identical to the iPad Air’s 2703 points). It’s a very zippy device, though not capable of achieving the same power as the Surface Pro 3.

That’s also because the Samsung Galaxy NotePro runs Android KitKat 4.4, modified with Samsung TouchWiz and Magazine UX, so it runs a mobile operating system rather than a desktop OS like the Surface Pro 3.

Samsung’s Magazine UX does attempt to put to use the massive screen on the NotePro 12.2, though, and does so by dividing up the screen into multiple Windows 8-esque tiles that you can customise, filling them with sport, business, news, email, weather – whatever you choose.

The Samsung Galaxy NotePro 12.2 has a beast of an on-board battery, at 9500mAH. Samsung says it’ll last for up to 13 hours of internet browsing, or 11 hours of video playback time. If you’re just playing audio, it’ll last for a whopping 131 hours, apparently.

The Surface Pro 3 has a slightly shorter battery life, at around nine hours of web browsing. We’ll bring you more figures when we’ve had a chance to test it out.

Both the Surface Pro 3 and Galaxy NotePro 12.2 have impressive cameras on the front and back of the device, though we wouldn’t recommend using them as your camera of choice as they’re both heavy and big. For Skype calls, however, they’re ideal.

Both tablets come with a stylus, too. The pressure-sensitive S Pen that comes with the Galaxy NotePro 12.2 works with the Air Command feature, which allows you to jot down memos, take focuses screenshots, activate multiple windows and more. It’s a bit thin and slippery to use, though.

Microsoft’s stylus offering is called the Surface Pen, which is used in conjunction with the Surface Pro 3’s OneNote feature. It’s rather large and clunky, though, and required an AAAA battery.

Other features that the two tablets have in common are a MicroSD slot, 802.11a/b/g/n/ac WiFi, a lack of LTE cellular connectivity (there is a LTE NotePro 12.2 but only in some markets, while there’s no word yet about a cellular Surface Pro 3), and a USB 3.0 port.

Overall, both the Surface Pro 3 and Galaxy NotePro 12.2 are impressive tablets that offer stunning, big, bright and colourful displays. They’re both ideal for multi-tasking – running more than one app simultaneously, side by side – though you won’t be able to run powerful desktop apps like Photoshop on the Android tablet like you can on the Surface.

If you’re simply looking for a tablet with an enormous display, you’ll probably find you’re better off with the NotePro 12.2, but for a device that could potentially replace your laptop completely, it’s the mid- to high-range Surface Pro 3 models you’re after.