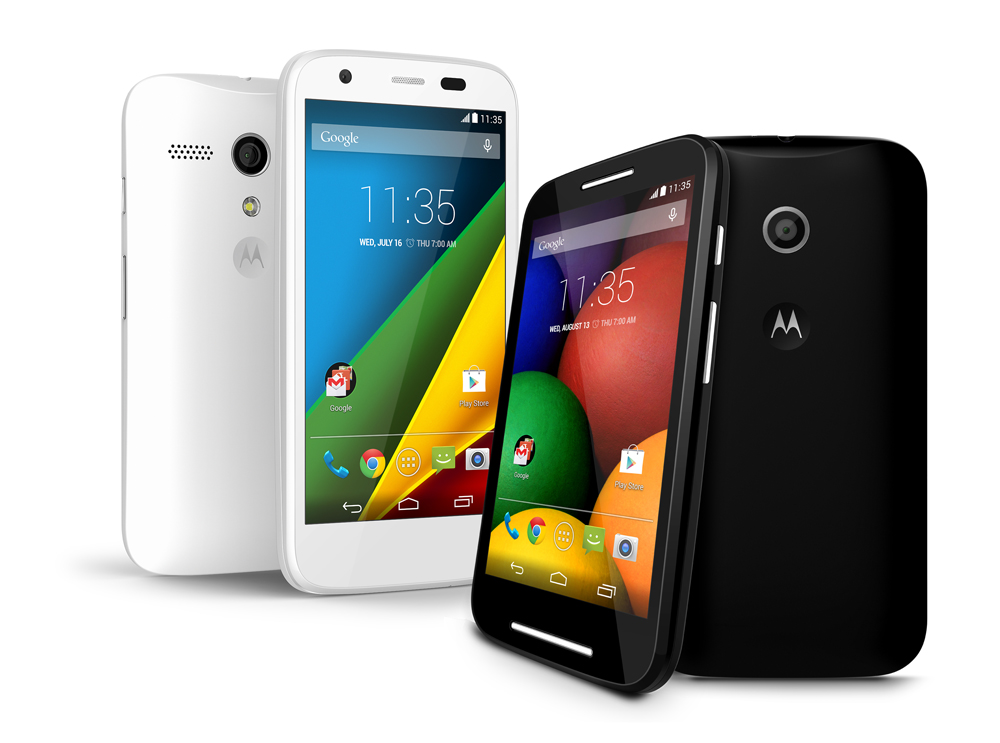 You might have come to our Motorola Moto G vs Motorola Moto E comparison review wondering why on earth we are comparing the specifications of two smartphones from the same company with a £60 price difference; clearly the more expensive Motorola Moto G is going to best the £89 Moto E on the hardware front. Actually, what we’ve learned is that although the Motorola Moto G has the better specification, the Moto E’s hardware is sufficient that it will be a great fit for many users – and especially so when you consider that those in the market for a budget smartphone don’t expect to get ultimate performance. The Motorola Moto E might not have as good a screen or as much storage or processing- and graphics power as the Moto G, nor its support for 4G and microSD expansion. But it does do everything most people will require, and at a staggeringly good price. It truly looks to be the best budget smartphone money can buy.

Here at PC Advisor we’re massive fans of the Motorola Moto G. It’s not the fastest, nor the most feature-packed smartphone you can buy, but it does all the essentials and a lot more for as little as £129 (8GB 2013 model). It’s the best-value smartphone we’ve ever seen and, accordingly, has been topping our budget smartphones chart for a while now. Also see: What’s the best budget smartphone.

The Motorola Moto E looks very similar to the Moto G, with the same curved rear cover and palm-friendly pebble-shaped design, although its bezel is ever so slightly raised on either side of the screen, compared with the Moto G’s edge-to-edge display. Both Moto G and Moto E let you fit interchangeable rear coloured covers (available for around £9), and feature a splashproof coating. Also see: 25 best smartphones.

The Moto E is slightly smaller and lighter than the Moto G, yet chunkier – that’s not unexpected for a budget smartphone. While the Moto G measures from 6- to 11.6mm in depth, the Moto E is a slightly fatter 6.2- to 12.3mm. You won’t notice the barely there difference in weight – the Moto G weighs in a whole gram heavier than the 142g Moto E, but it’s also half a centimetre taller, at 129.9mm versus the Moto E’s 124.8mm.

There is a good reason for the Motorola Moto G’s extra length over the Moto E: the screen. Whereas Motorola fits a 4.3in display to its Moto E, the Moto G has a 4.5in panel. And here’s where the marketing talk might catch out some consumers: the Moto E has a ‘qHD’ panel, which sounds good, right? Not really. If you think so then you’re probably muddling up ‘Quarter-HD’ and ‘Quad-HD’. Indeed, at 540×960 pixels in resolution, the resulting pixel density of 256ppi is lower than the Motorola Moto G’s 1280×720 ‘HD’, or 329ppi, panel. Both screens are pretty decent, especially that of the Moto E given its price, but with the larger, higher-resolution panel the Motorola Moto G in the clear winner in this category.

All that said, in our time with the Motorola Moto E we found switching between apps and home screens fast and fluid, with no lag. And while it might not be as fast as the Motorola Moto G, we wouldn’t really expect either smartphone to be what we think of as ‘fast’ below £150.

We haven’t been able to run benchmarks on the Moto E just yet, but we did run the 2013 Moto G through our usual Geekbench, SunSpider and GFXBench tests, and we expect to see similar performance from the 2014 Motorola Moto G. In Geekbench 3’s single-core test we recorded 334 points, and 1,162 points in the multi-core test. In SunSpider we saw 1504ms, putting it above handsets such as the Google Nexus 4, Asus Padfone 2 and Samsung Galaxy S3 Mini. Lastly, in GFXBench’s Egypt test the 2013 Motorola Moto G managed 27fps, which is faster than that of, for example, the Huawei P6 and HTC One X+. You can compare the Motorola Moto G’s test results against all the phones we’ve recently reviewed in our article: What’s the fastest smartphone 2014: processor, web and graphics performance compared.

Storage was once a sore point for the Motorola Moto G, with just 8GB onboard. Now Motorola has added support for microSDHC cards, you can add up to 32GB – plenty for all your apps and a pretty decent media collection. With just 4GB onboard storage is even more of a low point for the Moto E, although this is standard for a budget smartphone. What’s less standard is that it, too, has support for microSDHC. Sorted! Just be sure to factor in the cost of a microSDHC card when making your purchasing decision: you will need one.

Both Moto G and Moto E feature 5Mp rear cameras, which the Moto G pairs with an LED flash and 4x digital zoom. Neither is going to replace your DSLR, but we’ve seen some pretty decent outdoor shots captured with the Moto G, and both do the job for more casual scenarios. Both phones can capture 720p video footage at 30fps.

If you ever use Skype or are particularly fond of shooting selfies, it’s worth noting that only the Motorola Moto G has a front-facing camera – here a 1.3Mp model..

Below are two photos we shot on the Motorola Moto G, the first without HDR and the second with HDR, plus some test footage from its camera.

The main difference in connectivity is support for 4G networks – but only if you buy the 2014 Moto G model, since the 2013 Moto G is restricted to 3G connectivity. 4G can offer Wi-Fi-like speeds, but it can cost extra (depending on your operator and tariff), and it’s not available everywhere. Both Moto G and Moto E support Bluetooth 4, 802.11b/g/n Wi-Fi and GPS.

Both Motorolas run the latest version of Android, 4.4 KitKat, and will be upgraded when the next version of Google’s mobile OS is released. Both feature a fairly plain implementation of Android, although Motorola does stick in a few of its own apps.

The Moto E comes with existing Motorola apps such as Motorola Migrate, Motorola Assist, the firm’s camera software and an FM radio app. A new app, which will initially be exclusive on the Moto E, is Motorola Alert (pictured above). This can let people know you’ve arrived safely somewhere, you can use it to help meet a friend and there’s an emergency mode.

Although the Motorola Moto G has a slightly larger-capacity battery than the Moto E, at 2070mAh versus 1980mAh, it also has a larger, higher-resolution screen that will more quickly drain the juice. Motorola claims both handsets will last 24 hours with mixed usage. We’ll verify those claims once we’ve had a chance to do some more in-depth testing.