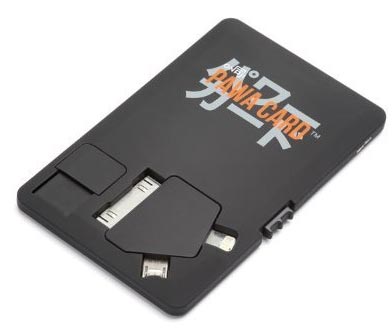 The Onaji Pawa Card is a credit-card–sized battery pack that promises to recharge your fading smartphone back to a third of its full power. Our tests got an iPhone 5s back to about 25 percent from dead. It boasts the three major phone connector types (micro USB, Lightning, and 30-pin) as well as a USB connector for charging and syncing. It even has a little torch! What’s not to like?

The Onaji Pawa Card is a super-slim battery charger for just about every smartphone or music player out there. Also see:  9 best portable USB chargers

Battery chargers for digital devices such as smartphones can be bulky. Battery cases for phones make a once slim design classic a bit of a fatty.

Other box-like battery packs are both chunky and require a usually far-too-long cable or two to connect to your fading phone. It’s enough to make iPhone designer Jonny Ive string himself up by a white Lightning power cable.

But until Jonny works out how to fit a decent battery into the iPhone and Samsung catches up with this fantasy idea we’re stuck with phones and tablets that will run out of power much earlier than we expect them to.

The Onaji Pawa Card is takes the chunkiness out of battery rechargers. It’s credit-card–sized in width and length, and about 65 percent as thin as the iPhone 5s or Galaxy S4.

There are now straggling cables as everything – USB strip for charging the card, and connectors for most phones or music players – is built in to the lightweight card. It’s a very clever, neat design.

The standout thing about this battery card is its 3-in-1 connector. There’s a Lightning connector for Apple iPhone 5/5s/5c, a 30-pin Apple connector for iPhone 3/3G/4/4s or iPod, and Micro USB for just about everything else, such as Samsung Galaxy, Google Nexus, Motorola, even BlackBerry…

Of course it’s not a battery case so affords no extra protection, but there are plenty of phone cases out there to choose from.

You’re not going to get bags of reserve power out of this slim card, but its 500mAh battery will give you enough charge to get you home or to a friendly power source.

Onaji claims it will give your phone up to a 30 percent charge – enough for most emergencies. Our tests got close to that –maybe 25 percent, which isn’t going to give you another full day on your smartphone but will allow you to go that little bit extra.

There’s even a little torch in case your emergency comes with the lights out. It’s not very powerful but it might come in useful one day.

With its USB connector you can always use it instead of a straggly cable to charge your digital device directly from a USB power plug or via a computer.

At £19.99 the Onaji Pawa Card is good value. The same-priced rival Nomad Chargecard is very similar in design, and indeed is even thinner – but doesn’t have the onboard battery pack.

If you just need a neat alternative to carrying cable around with you the Nomad Chargecard is great, but the Onaji Pawa Card costs the same and promises to get your fading phone back to about a quarter of its charge.

The Onaji’s multi connector is also a plus on the single-connector Chargecards. If you need just the one connector type the advantage is lessened, but you might be surprised how many friends and colleagues suddenly look around wild-eyed with device battery panic. You literally have the power to save them.

It should be noted that, as with some other Lightning-equipped devices, your iPhone may squeal that it’s not certified to work with your Apple device. Don’t worry, Apple gets like that unless manufacturers pay them loads of money for official certification. The charger still works anyway, although a couple of times we had to flick the card’s switch on and off a few times before charging began.