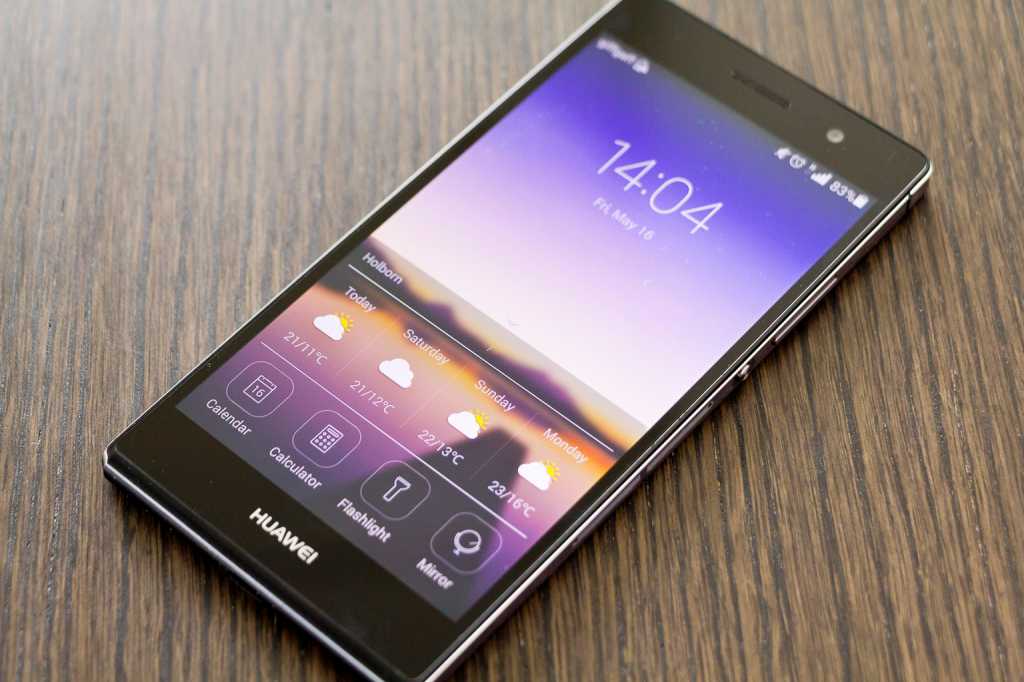 Huawei has produced a stunning smartphone in the Ascend P7 and this is couple with good value for money with that non-flagship price tag. There’s some decent hardware on offer here, particularly the camera but the P7 is let down by software performance issues.

Still set on cracking the smartphone market, Huawei has introduced the Ascend P7 at a launch event in Paris. We jumped on the Eurostar in order to spend some time with the new handset so here’s our Huawei Ascend P7 hands-on review. Read: The 24 best smartphones: The best phone you can buy in 2014.

For starters, the price of the Ascend P7 is very reasonable for a flagship smartphone. Huawei has undercut rivals with a recommended retail price of €449, we expect it to sell for £399 SIM-free in the UK but we’ll let you know once we have a figure in sterling.

The device will launch this month according to Huawei while Orange said that the Ascend P7 will hit stores on 7 June.

The firm has kept the style of the Ascend P7 very similar to the P6, so it’s recognisable as Huawei smartphone. True to form, the P7 is extremely thin at 6.5mm – its smaller brother is just 6.1mm but there’s a lot of tech packed into the P7 and we’re impressed.

Compared to its predecessor, the main difference is that the P7 is larger in physical size. This is due namely to a larger screen, a common trait in smartphones – so much so that Apple is even rumoured to be going bigger for the iPhone 6.

It retains the rounded edge at the bottom and has Gorilla Glass 3 on both the front and back. Like before there is a brushed aluminium frame running around the edge of the device. For a phone with a large screen, it’s amazingly light and easy to use. We particularly like the spun metallic finish on the rear which is achieved with seven layers. We took a look at the black/blue model but it will also be available in white and pink options.

The spun effect goes outward, centered on the Huawei logo. It looks great but you can’t really see it unless it reflects light in the right way and you’re really looking for it which is a bit of a shame. We’re just glad it doesn’t have the glittery effect of the Nexus 4.

Although the P7 looks stunning, that glass rear cover does have a downside. Like the Nexus 4, there’s nothing on the back to stop the glass from touching whatever you put the phone on (the Xperia Z2 has its aluminium frame for example). This means that not only do you expose the device to damage, it will slide off most surfaces which can be quite frustration and also risky.

With a 5in screen, the Ascend P7 matches many other flagship smartphones on the market. It is big but a reasonable size in terms of balancing how easily you can reach and use it with one hand and offering space for tasks such as video, gaming and web browsing.

Like every other flagship we’ve seen this year, the Ascend P7 has a Full HD resolution, it looks like we’ll have to wait for the LG G3 or beyond for something higher res (if we even need it). The screen looks great and has excellent viewing angles. A small downside is that it seems to need the brightness set at the upper end of the scale for comfortable viewing – this is especially needed outdoors when it’s bright and sunny.

Under the hood is a Kirin 910T 1.8GHz quad-core processor coupled with 2GB of RAM. After a good time of testing, the P7 definitely runs smoother than the P6 which is a good start. However, it’s not a completely silky experience. We’ll talk about this in more detail in the software section below.

Although we’re not a big fan of benchmarks on smartphones these days (they’re too easy to cheat), our results do seem to match our findings from a user perspective. The P7 scored 1870 in the multi-core test of Geekbench 3 which is quite a way off the leaders which get around 1000 points more. It’s worth noting that this includes the Nexus 5 which is a cheaper smartphone. See also: What’s the fastest smartphone 2014: processor, graphics and web performance comparison.

A SunSpider web browsing time of 1296ms is nothing to get excited about while a frame rate of 12.4fps in the GFBench T-Rex is a little disappointing considering that same results is what we’ve seen from the Sony Xperia Z2 in the harder Manhattan test – which isn’t available on the P7.

The device is dual-SIM but one of the draws doubles up as a microSD card slot. So you can either have two SIM cards or just one with some extra storage which is a pretty cool party trick. Internal storage is a pretty standard 16GB. Unfortunately, Huawei has confirmed with us that the dual-SIM model won’t be on sale in the UK. Also see: Best dual-SIM smartphones.

Huawei touts its cameras as the best around and things are no different when it comes to the Ascend P7. The firm said the Ascend P6’s camera was better than the Samsung Galaxy S4’s and iPhone 5’s.The P7 has a 13Mp camera at the rear with a 4th generation Sony sensor and a DSLR-level processor. Huawei claims it’s great at shooting in low light and for speedy shots.

Well the firm has made a cracker of a camera with the Ascend P7. The device is capable of taking high quality photos is different lighting conditions, whether you’re outside in bright sunlight (although you have the screen issue which we mentioned earlier) or in a bar with little more than candle light (see below).

There’s no dedicated camera button but you can double press the volume key to launch the camera and take a photo from sleep – or switch it to a shutter button.

For selfies there’s an 8Mp front facing camera with a five-piece lens and Huawei has decided to coin the phrase ‘groufies’ (group selfies), this is essentially a group panorama taken with the front camera – a central photo then one either side by turning the device.

As you would expect, Huawei has loaded the Ascend P7 with Android 4.4.2 KitKat which is the latest version of Google’s mobile operating system. The Chinese firm doesn’t leave it as is though, instead adding its Emotion UI on top.

There are downsides to Huawei’s Android skin such as the lack of a proper app menu, so the homescreen panels must house them instead in iOS style. The good news is that is seems much nippier than before – this was the main downside to the P6 as a smartphone. This is also likely down to the new 1.8GHz processor which we mentioned earlier.

What we like about Emotion UI is the amount of customisability on offer. There are loads of themes to choose from and download but you can tweak all kinds of aspects to really personalise the software. These include homescreen panel transitions, icons and fonts.

During our hands-on time we noticed that Huawei has done some work speeding up its laggy interface – this was the main downfall of its predecessor, the Ascend P6. Although things are better, now we’ve spent a good chunk of time with the P7 we can report that those signs of lag have not been completely eradicated (see hardware and performance for benchmarks).

The device often judders when you pull the notification bar down and generally things get a bit sticky when you’re running a lot of apps and tasks. We’ve also had issues such as the P7 refusing to open Twitter by tapping the icon – we could only access it by way of recent apps for a good period of time.

The battery is rated at 2500mAh and is non-removable. Echoing the Samsung Galaxy S5, the P7 has an ultra power saving mode which can supposedly make the device last for up to 24 hours on 10 percent of charge. It works in a pretty much identical way to the S5 in that you get a black and white interface and basic functions like text messages and calls.

Most users will find the Ascend P7 will need charging every night. When we use it for checking emails, taking a few photos, social networks and other normal smartphone duties, the device is fairly low on power come the evening. With lighter use, the P7 will last a couple of days but as we said, most users will find it offering the now classic one day. All day battery life may be impressive on a budget phone like the Moto E but on a flagship device like the P7 we want more.