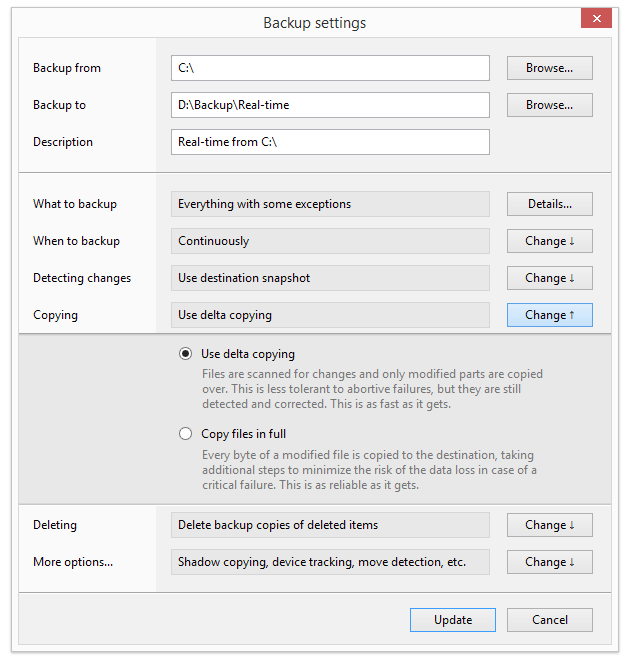 Bvckup 2 is one of those applications that you don’t need to think about after it’s set up: it just works. It’s fast and reliable with well-thought out features to help along the way. Delta copying speeds up the backups when compared to full file copies, and greater reliability comes from intelligent error handling and detailed logging. Bvckup represents great value at $20 for home users.

There are many ways that you could accidentally lose the information on your computer, from hard disk failure, to something as extreme as a flood or power surge. A nifty little backup application that has saved our bacon before is Bvckup 2.

The user interface is the first thing you see when you open up an application, and is also the part that you’ll be using on a daily basis, so a good interface is nice to have, but a great one becomes a feature in its own right.

Bvckup’s interface reflects this, it is simple and to the point, eschewing gaudy colours and unnecessary embellishment to remain slick and responsive to use. All of the information that you need to keep track of your backups is in front of you on each backup’s tile.

There are only two buttons to play with on the menu bar: Go and Stop. That really is it. If a backup is running then pressing Stop pauses it, pressing it again cancels it, and further pressing it disables it. The same is true in reverse for the Go button. Simple. (See all software reviews.)

Backing up is inherently a process of copying files from one location to another, and the way the copying is carried out dictates the overall speed of the backup.

Backups that copy every file on every run clearly do a lot of redundant work if the files haven’t changed and for large backups this can be very time consuming. It only makes sense to be selective with what to copy. But what if you could copy not just the modified files, but only modified parts of the files?

This is how Bvckup works; it uses an algorithm to check each part of the original file against the respective part of its existing backup copy and copies across only parts that have changed. This means that if only 2 MB changes in a 5 GB file, only 2 MB of data is copied over, and the time savings can be immense.

One of the other key features for Bvckup is its logging system. Being able to understand what was happening during the backup comes in handy in many situations, but it is easy to get buried under all the details. Bvckup addresses this by displaying all backup activity in a hierarchical manner making it really easy to drill down from the high-level information to really specific details.

What this means in practice is that if an error occurs you will have all the information about the cause and the context at your fingertips in a couple of clicks. See also best backup software.

Other useful features in Bvckup 2 include snapshots of the destination. This means there’s no need to rescan the destination each time when comparing it to the source and building the backup plan, which saves time.

Scheduled, manual and real time backups are available. Detection of moved or renamed files can save time recopying. Optionally you can elect to archive deleted files at the destination.

The program doesn’t use a proprietary file format, so you can open your backed up files just the same as the originals. With the help of Device Tracking you can tie backups to the specific USB disk rather than a Windows drive letter under which it may appear.