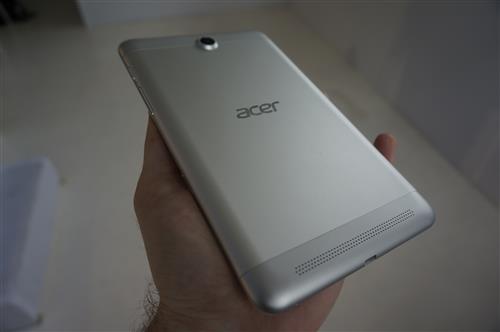 The Iconia Tab 7 doesn’t have an impressive spec sheet but it’s nice to see some aluminium on display and for the price, it seems to be a reasonable option for a 7in tablet – if you want to make phone calls on a 7in device. Check back for a full review soon.

Acer has added to its range of budget tablets so here’s our Iconia Tab 7 hands-on review from Acer’s ‘a touch more connected’ even in New York. Read: The 25 best tablets of 2014.

Although the Iconia Tab 7 (A1-713HD) is the more premium of the two tablets announced today, it will retail at €149 next month. Despite this low price, the tablet has a mostly aluminum rear cover, although the camera juts out a large amount like a sore thumb. Check out:  Acer Iconia One 7 hands-on review.

Yes, it’s yet another 7in tablet vying for your attention but at this price, the Iconia Tab 7 is worth at least a look. It’s easy to hold since it’s nice and light at 298g, about the same as the cellular Nexus 7.

If you thought the Iconia Tab 7 was you’re bog standard 7in tablet then you’d be wrong because it has a SIM-card slot hidden underneath a plastic cover on the rear. This provides 3G connectivity for data on-the-go but also the ability to make phone calls. It’s not 4G but at this price, that’s acceptable.

That’s right, the Tab 7 is a phablet and although there is an ear piece so you can hold the device up to your face, Acer was quick to point out you can also hook up a Bluetooth headset. See also: Acer Aspire Switch 10 hands-on review: Windows 8 tablet and laptop in one device.

Next to that SIM-card slot is a microSD card slot which means you can add to the 16- or 32GB of internal storage. Acer touts a battery life of up to six hours which is nothing special. We’ll test this out properly when we get one.

Powering the Iconia Tab 7 is a MediaTek 1.3GHz quad-core processor and 1GB of RAM. General performance seems ok but the device took a good few seconds to switch from portrait mode to landscape and vice versa.

It’s nice to see the latets version of Android on-board, version 4.4 KitKat, but we did notice an awful lot of pre-installed apps which is a shame. The app menu is somewhat overwhelming.

Last but not least, the 7in screen is an IPS panel promising good viewing angles and although they are fairly good, we’ve seen better elsewhere. A 1280 x 800 resolution seems about right for the price but bear in mind that the Tesco Hudl offers more pixels as does the Nexus 7.

Acer says the Iconia Tab 7 has an anti-fingerprint coating which we’ll test over more time but something we did notice is that the brightness really needed to be set at full or close to full for the screen to be comfortably viewed.