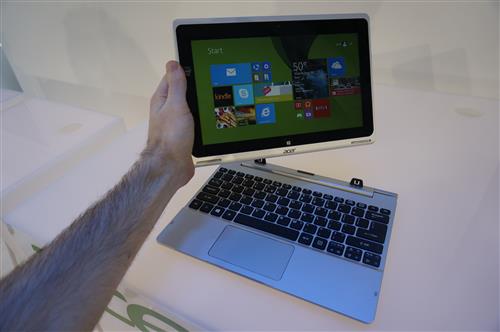 Although the Acer Aspire Switch 10 is very affordable, it’s another hybrid which is neither great at being a laptop nor a tablet. It’s both bulky and fiddly. We like the IPS screen and the multi-mode ability thanks to the magnetic hinge (minus the top heaviness). However, the keyboard and trackpad are lacklustre and there really nothing to get excited about in terms of specs and performance. We’re yet to be convinced by a hybrid.

The Switch 10 comes pre-installed with Windows 8.1 and can be picked up for £289 – a little more than the Toshiba Encore. Acer will be taking on the Lenovo Yoga and other hybrids like the Asus Transformer range and Samsung Ativ Q.

It’s certainly affordable but that doesn’t mean it’s a good deal. Read our Acer Aspire Switch 10 to find out what this hybrid has to offer.

Like  Lenovo’s Yoga devices, the Switch 10 can transform between four different modes: laptop, tablet, tent and display. It does this with what Acer calls its ‘Snap Hinge’ which, with the help of magnets, clips the tablet to the keyboard dock. It does so fairly easily although quite aggressively – the two are unlikely to separate unless you want them to.

This is the device’s main selling point and it works well, but the hinge doesn’t fold all the way round like the Lenovo Yoga though, so don’t try that unless you want to risk breaking it. Instead you have to spin the tablet around 180 before folding it back down onto the keyboard, leaving it upright in display mode (below) or standing the device in tent mode.

We have discovered an unfortunate design flaw in the Switch 10. If you push the screen away from you in laptop mode the device eventually falls over due to the weight of the main tablet section. This perhaps won’t occur if you buy the keyboard dock with a hard drive but we can’t say for sure.

The keyboard dock doesn’t have a battery to charge the tablet like some hybrids but does come with an optional 500GB hard drive. It has a USB port on the right hand side as standard which is handy for plugging in a mouse or an external hard drive – the main tablet doesn’t have one.

As is all too common, the keyboard and trackpad are nothing special; the former makes for pretty fiddly typing due to miniature size keys and the latter was quite sporadic during our time with the Switch 10. It also requires a deep press for mouse buttons.

Overall, the Aspire Switch 10 feels a bit chunky but sturdy at the same time. The tablet alone is 8.9mm which isn’t bad but at around 1.2kg when the device is docked to the keyboard is pretty heavy for a 10in laptop.

The build quality of the keyboard dock is distinctly cheap and plastic but things are better when it comes to the tablet. It feels solid and although it also uses a certain amount of plastic, the brushed metal rear cover is a nice touch for a device as affordable as this.

As you can gather from the name, the Aspire Switch 10 has a 10.1in screen which has good viewing angles thanks to its IPS panel. The touchscreen display is bright and colours pop nicely. It uses a 1366 x 768 resolution which is about right for the price. Read: Acer Iconia Tab 7 hands-on review: Budget Android tablet has 3G data and phone calls.

Although the screen is one of the best features of the Switch 10, we found the adaptive brightness unpredictable and annoying so switched it off. We also feel that Acer could have fitted in larger screen due to those fat bezels – 11.6in would fit by our measurements.

Not only would this make watching video and web browser much more enjoyable, it would make Windows 8.1 easier to interact with. Luckily, the touchscreen is nice and responsive but it’s not always easy to accurately hit where you’re aiming. On the software front, there’s fair amount of added bloatware – mainly Acer’s own but also other items like eBay. You can easily uninstall anything you don’t wish to keep hold of.

Inside is an Intel Atom Z3745 (Bay Trail T) 1.33GHz quad-core processor and 2GB of RAM. Performance is reasonable and you’ll be able to do regular day-to-day tasks like web browsing and word processor on the Switch 10 but don’t expect the device to cope with anything remotely strenuous.

We measure the Switch 10’s performance with PCMark 7 and got a result of just 2486 points – somewhat disappointing for a quad-core x86 processor. Our graphics benchmarks using Stalker: Call of Pripyat yielded a poor result averaging 10fps over four different tests.

On the battery life side of things we measured 6 hours 15 minutes in our looped-video rundown test – playing an HD quality film over Wi-Fi with the screen set to a comfortable 120 cd/ms brightness. A reasonable result which means the device should get you through a day of varied use.

There’s a choice of 32- or 64GB of internal storage and our 32GB review sample has only 10GB free out-of-the-box so it might be worthwhile investing in the higher capacity model or the keyboard dock with a built-in drive. Alternatively, there’s a microSDXC card slot on the side of the tablet so you have a few options here.

Alongside the microSD card slot are a couple of handy ports. There’s a microUSB port (not for charging) and a Micro HDMI port. These make it easy to connect other devices to the Switch 10, or hook the device itself to a larger display.

Acer includes a 2Mp front facing camera for video calls and it’s refreshing to see front facing stereo speakers which are mounted below the display.