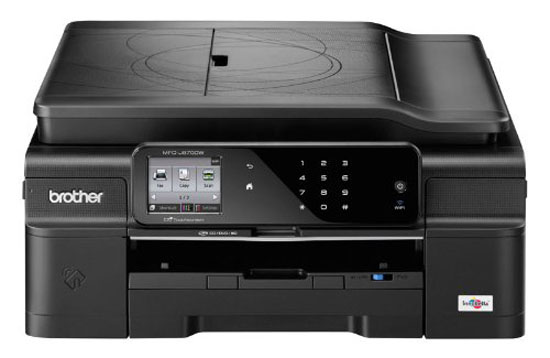 There’s no question that the Brother MFC-J870DW has a host of excellent features including optical-disc direct printing and touchscreen controls. While it showcases NFC capability this will be of limited appeal. Wireless photo print speeds are very disappointing.

Just another home and small office  multifunction colour inkjet  printer from Brother you might think. Yet as well as having an impressive array of features at a reasonable price, the Brother MFC-J870DW has established a unique milestone in this class. See also: what’s the best multifunction printer?

This is the first inkjet to enable Near Field Communication (NFC) and it’s been released alongside the similarly NFC-friendly A3 version, the MFC-J6920DW.

On the Brother MFC-J870DW, the front left panel beside the output tray is dedicated to NFC connection and the operation is quick to set up once you turn the ability on in the settings of both phone and printer. The NFC-enabled phone needs to be within around 10 cm to make that first link.

However, the major drawback to widespread adoption is that only phones with NFC included can use Brother’s iPrint&Scan app for NFC printing. That limits it to certain models designed to run Google and Microsoft mobile software.

Once initiated we found that sending a photo to the MFP took 4 minutes to produce a 10 x 15 cm print.

The same was true when the same size photo was printed via the SD card slot, USB port and conventional wireless Wi-Fi transmission from an iPhone. This was in maked contrast to using PC software and a wireless link which managed to run off an identical 10 x 15 cm picture in just 55 seconds.

In most other respects, the MFC-J870DW features are highly commendable. It offers the full multifunction set of print, copy, scan and fax and has an excellent colour touch screen display panel that is extremely easy to follow, brightly lit, tilting and mode-sensitive so only relevant information appears on the display.

As this machine is clearly aimed at low-volume users, there’s a modest 150-sheet input tray in the base, although this is supplemented with a 20-sheet photo tray above. Take a look at our 2014 chart: what’s the best printer?

Irritatingly, swapping between the two trays involves removing the unit and manually adjusting the controls each time.
Built into the lid of the scanner is a fold-out 20-sheet ADF for quick copying but unlike the main input tray, the ADF does not allow for duplex printing. When you lift up the scanner lid, a DVD/CD/BD holder is cunningly concealed underneath and this can then be lifted out and inserted into the front of the MFC-J870DW for direct printing.

Connections include USB 2.0, ethernet, and Wi-Fi 802.11b/g/n and you can print and scan to a range of cloud services.

Four print cartridges slot in on the front right, and if you opt for the high-volume set (600 pages each rather than the basic 300) then your printing costs at Brother’s RRP result in 3.9p per page for black, and 2.5p per page for each colour. Current online prices, though, can reduce this figure by at least a third.

Speed and quality with this inkjet are variable. We’ve seen how print speeds for photos using memory cards and mobiles were desperately slow. The images were remarkably sharp and the colours looked authentic. Draft black text documents could manage 18 ppm at a pinch, with normal quality black and colour documents arriving at 11 ppm and duplex versions of the same at 5 ppm. Standard paper black ink documents were generally solid and unbroken but occasional banding issues were evident in colour images.